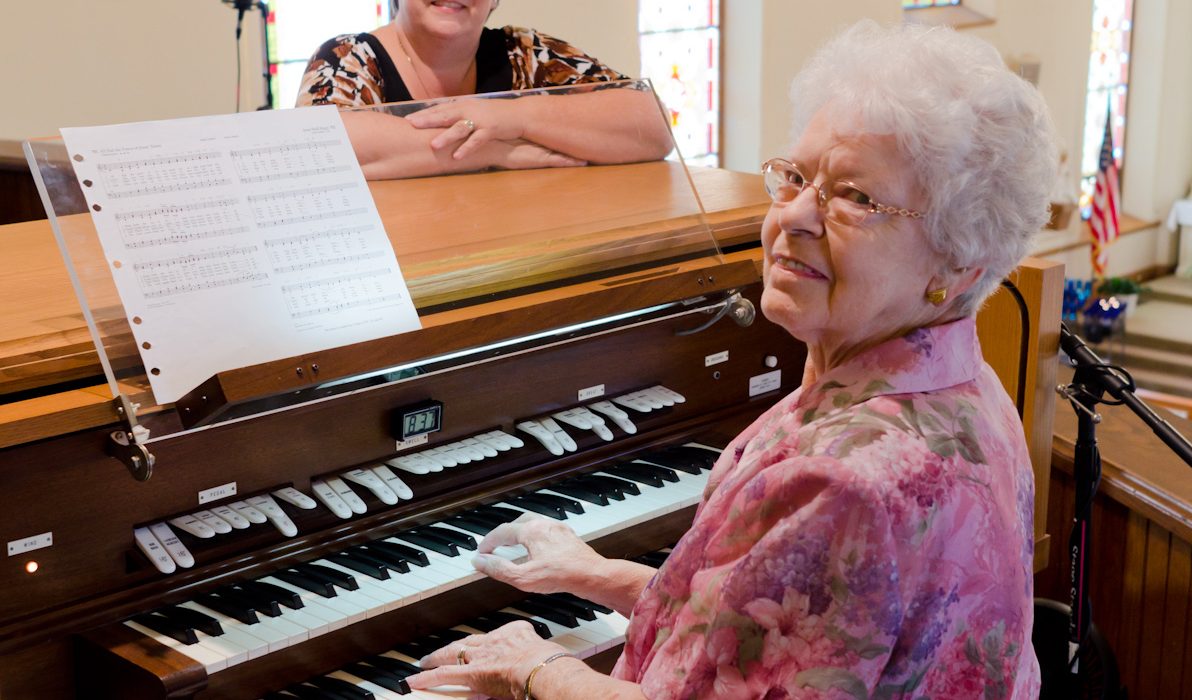 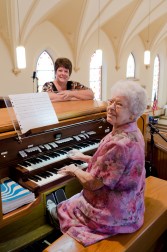 Rosina Harber, at the St. Patrick, Arcola, organ is shown with her daughter Annette Lamle. A reception for parishioners, friends and family is being planned in the parish hall after her 7:30 a.m. retirement Mass on Sunday, Aug. 28.

ARCOLA — Rosina Harber has been an organist at St. Patrick Church, Arcola, for more than 60 years and has played for the 7:30 a.m. Sunday Mass as long as anyone can remember. It’s no wonder, then, that she is finally planning to take it a little easier and retire from active duty in the choir loft.

Rosina was very likely born with music in her soul.

“It’s a family thing,” which has been handed down through the years, said her daughter Annette Lamle, also a parishioner.

Annette says the family’s musical talent first took root in her grandmother, Luella Hinen, who was organist at St. Patrick’s in the mid-1900s and taught her young daughter Rosina those skills as well.

By the time Rosina was a sixth-grader at St. Patrick Catholic School, one of the teaching nuns there, Sister Dolorita, recognized her musical abilities and decided she should play the organ on Children’s Sunday, the third Sunday of each month when the students planned the readings and the music. She did so well that from then on she was on call every week.

Years later, after marrying Carl Harber and starting a family, Rosina took a few years off to care for her children. The love of music was never far from her thoughts, however, and she still played for special occasions.

After a new pastor at St. Patrick heard her play for a wedding over which he officiated one Saturday and learned that she was a parishioner, he told her, “Be here tomorrow morning. You’ll be playing for early Mass from now on.”

She clearly enjoyed the challenge because she has shared her considerable musical talent with the parish ever since.

“I’ve enjoyed every minute of it,” she said.

Rosina is a lifelong St. Patrick’s parishioner, having received all her sacraments from Baptism to Matrimony at the small rural church. Appropriately, she even chose Cecilia, the patron saint of musicians, as her Confirmation name.

Besides music, she has been active in other parish ministries as well. She recalls cleaning the church and caring for altar linens. She served ten years as president of the Rosary Society and recalls with laughter the last parish chicken dinner she oversaw.

She taught religious education to kindergarteners through fourth graders and CCD classes for the Sacraments of Reconciliation and Holy Eucharist for several years. And, when Annette was a high school freshman and no Saturday religious education classes were offered, Rosina took on those education responsibilities for her daughter and her Catholic friends.

Though Rosina has suffered progressive hearing loss and is a cancer survivor, she has put aside those personal difficulties and continued to share her time and her love of music with St. Patrick parishioners, said her daughter.

These days Annette always sings for the Masses when her mom plays and helps out at the organ as well.

“I love music so much,” Annette said. “It’s a gift from God that we share.”

She says that when she plays, she feels two hands on her, her mother’s and her grandmother’s. “There’s a very strong tie,” she said.

In honor of Rosina’s years of religious and musical dedication to St. Patrick Church, a reception for parishioners, friends and family is being planned in the parish hall after her 7:30 a.m. retirement Mass on Sunday, Aug. 28. It will be an opportunity to recognize her decades of service to the church she loves.

Rosina says that she looks forward to reminiscing with many of her friends and former students at the event. Annette stresses that everyone is welcome to share that wonderful day with her mom.

“What better way for people to say thank you?” she asks.