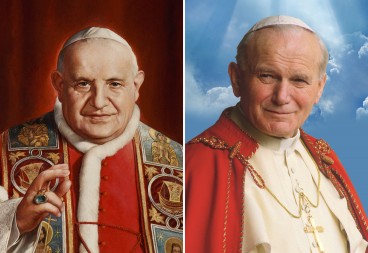 Pope Francis has set April 27 as the date for the canonization of Blessed John XXIII and Blessed John Paul II. The two pontiffs will become saints on Divine Mercy Sunday. John XXIII is depicted in a painting from a museum in his Italian birthplace. John Paul II is shown in a composite featuring a image of him by Polish photographer Grzegorz Galazka.

VATICAN CITY (CNS) — Just over a week before Pope Francis canonizes two of his predecessors in a ceremony in St. Peter’s Square, Romans are bracing for the arrival of as many as 3 million outsiders.

The event will be the climax of an Easter-season tourist boom for what one newspaper dubbed “superstar Rome.” Alfano, who chaired a meeting April 17 attended by Rome Mayor Ignazio Marino and the heads of police and intelligence agencies, predicted attendance by at least 800,000 pilgrims, including some 5,000 coming from Poland on five special trains.

The office will set up 17 maxi-screens in the historical center of Rome in time for the canonizations.

“The surge in religious tourism to Rome and the Vatican this season over the previous will be an imposing 30 percent or so,” said Flavio Mollicone, spokesman for ADOC, a union of Italian consumers. He told CNS the estimate is based on reports from hotel, travel and business associations.

“The crescendo reflects the popularity of Pope Francis,” Mollicone added. “The major influx is from Latin America and Spain, plus East Europe — Poland, Bulgaria and Russia.”

Five consecutive years of recession in Italy had put a damper on Italian tourism in general, so merchants welcome the business, according to Lamberto Santini, ADOC president. March alone brought more than 2 million visitors to Rome.

Preparing for the canonizations, the city has invested more than $7 million in 980 portable toilets, street barriers, first aid stations, bottled water and other amenities, Mayor Marino told the press in early April.

Because religious pilgrims tend to remain only briefly in pricey Rome, cafes and restaurants near the Vatican are preparing relatively inexpensive sandwich and take-away menus for this period.

Reports of canceled hotel reservations suggest a few might fear it is too much of a good thing. “Risk of Chaos, Tourists Flee from the Days of Canonization,” trumpeted a banner headline in the newspaper La Repubblica April 16. The paper estimated that up to 3 million visitors would be in Rome during the two weeks ending May 4, a period that includes three public holidays.