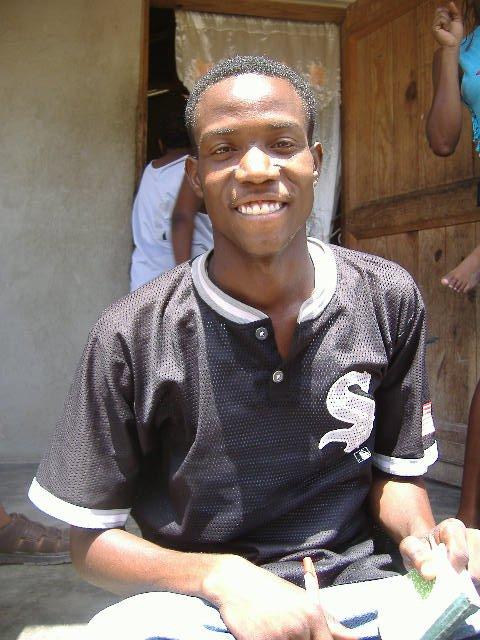 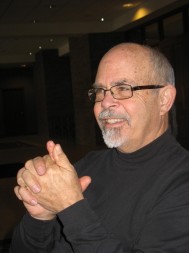 Jim Bugert of Ossian has approached retirement as “this period of our lives with no regrets and the prospect of new discoveries and hidden talents.”

OSSIAN —  “I’m a volunteer kind of guy and not one of those people who sits in an aluminum chair in the driveway watching the cars go by. …. I’ll be darned if I’m gonna get bored,” quipped Jim Bugert.

In retirement he lives by a quote from RoseAnn McCarthy, a high-school classmate: “We should approach this period of our lives with no regrets and the prospect of new discoveries and hidden talents.”

In fact, with no background in music, Bugert recently taught himself to play the harmonica. He practices with local blues bands and weekly joins them in performance.

In April, he and another high-school classmate, who with Bugert turns 66 this year, will travel Route 66 from Chicago to the western edge of Santa Monica Pier.

A graduate of Central Catholic High School, Fort Wayne, Bugert then earned an engineering degree from Purdue University. He and his wife, Kathy, reside in Ossian and belong to St. Therese Parish, Fort Wayne. They are the parents of four children, have seven grandchildren and will observe their 40th wedding anniversary on June 17. They do some traveling, visiting big cities to enjoy the architecture, Bugert said. Two of their children and five grandchildren live in Denver and Houston.

Bugert began planning for retirement long before he left International Harvester in Fort Wayne on Aug. 4, 2005, at age 60 following a 40-year engineering career. He already volunteered at the Red Cross, Big Brothers-Big Sisters and with C.A.S.A. (Court Appointed Special Advocates).

He spent a week in Haiti in 2004 with about 24 volunteers from The Chapel, whom he met while spelunking in southern Indiana with an adventure group from Fort Wayne.

When you’re cave exploring, Bugert related, you carry almost nothing with you. “But here’s this guy who pulls out a four-pound Bible and a candle to read Scripture and lead us in prayer. I inquired where he was from and was told about their trips to Haiti. I asked could a Catholic kid join you? I was 60 and they were 30,” Bugert said. 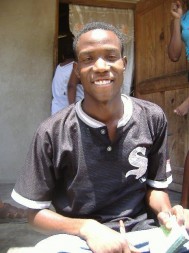 Thanks to the financial support of Jim Bugert, Sadrac Innocent has been able to continue his schooling despite many severe hardships in Haiti including Hurricane Katrina in 2005 and a devastating earthquake in 2010. In his senior year in college in the Dominican Republic, he’s earning mostly A’s and B’s in a Spanish-speaking country where the Haitian race is hated by many.

In ministering to the Haitian people — sharing the Christian faith — a volunteer can develop a deep connection with the country and its people, resulting in a desire to continue serving, Bugert explained.

“I vowed I was not going to fall in love with anybody,” he said.

But then he met Sadrac Innocent, a bright, high school junior or senior, serving as an interpreter with the Mission of Hope at Port-au-Prince, the capital and largest city of the Caribbean country.

The Haitians are not materially oriented, Bugert related. “If you give someone a Tootsie Roll they will break it in half and share it,” he mused.

Bugert came home with the intention of paying for Sadrac’s secondary schooling — about $900 a semester. In 2006, a year after deadly Hurricane Katrina struck Haiti, displacing tens of thousands of citizens, Bugert returned to the Mission of Hope on his own for six weeks to study the schools and get to know more about Sadrac, his family and village. Sadrac was 21 and still a senior in high school.

“When the bullets start flying (from a military coup d’état) the schools shut down,” Bugert explained. The students may miss a semester or two before schools open again.

During his visit, Bugert decided to volunteer on a medical team, even though he had no real experience. Following some training, he learned to take temperature, pulse and breathing rates, meeting 950 Haitians who were sick.

“In Haiti, a family consists of grandparents, parents, children and a pig or goat,” Bugert reported. “But if the baby and the pig both get sick, guess who gets the medicine?” he asked. “That pig is supporting the whole family!”

Again, upon returning home, Bugert vowed to put Sadrac through college. To meet the expense, he began working part-time at a hardware store in Bluffton, then at an Ossian grocery and finally at Fox Island County Park Nature Center, Fort Wayne, in maintenance for more than four years.

“You know, working two-to-three days a week for a minimum wage of $8.32 an hour you can put a kid through college (in Haiti),” Bugert said proudly.

Sadrac began his college courses near Port-au-Prince, majoring in business administration. On Jan. 12, 2010, his hand was on the doorknob of the classroom building when the area was struck by an catastrophic earthquake, damaging or destroying large numbers of structures, including the building he was about to enter. Nearly all of the professors and students in the building were killed, Bugert said. The earthquake destroyed almost the entire city of Port-au-Prince, leaving nearly 100 percent of the city’s population homeless.

To complete college, last year Sadrac moved and transferred across the border to a university at Puerto Plata in the Dominican Republic, where they only speak Spanish, Bugert said. Even though he spoke three languages — Creole, English and French — Sadrac didn’t know Spanish. Also, his race was considered “the scum of the earth,” said Bugert. Sadrac changed his major to tourism and travel.

Last year the Bugerts traveled to Ontario, Canada, to visit Sadrac and his fiancée Leeann. The couple met in Haiti when she worked there in 2011. They’ll marry in Haiti next April and in May return to her home in Ontario for a reception where Bugert will serve as “papi-Sadrac,” the “father of the groom,” since Sadrac’s father is deceased.

Reflecting on the Haitian experience, Bugert said he has come to realize how important and rewarding people are. “The material things simply make the ‘world go round’ so we can help others who are lacking in the material things.”