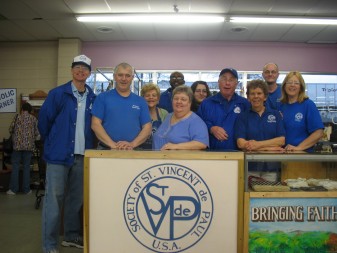 Cheryl Mowan (center, with husband, Mike, to her left) stands with workers and volunteers in the refurbished St. Vincent de Paul Store in downtown Fort Wayne, just east of the railroad overpass on South Calhoun Street. They include, from left, Ben (store manager), Gary, Sue, Anthony, Heather, Gwen, Dallas and Nancy (assistant manager). The thrift store is open Monday through Friday from 9 a.m. to 5 p.m. and Saturday from 9 a.m. to 1 p.m.

FORT WAYNE  —When Cheryl Mowen was “retired” for financial reasons in 2006 as minister of services from St. Therese Church at age 59, she settled into doing what many retirees do. She and her husband, Mike, dined out more, did some traveling — to Brown County, in the fall and to Florida in the winter — and enjoyed having the freedom for shopping, attending concerts and spending more time with their two children and four grandchildren.

Mowen also belongs to several organizations, which occupy her time monthly, including her CRHP (Christ Renews His Parish) group of nearly 31 years, two book clubs and is a catechist for RCIA (Rite of Christian Initiation for Adults).

About 25 years ago, while working at St. Therese as the secretary, she was asked by the district president of the St. Vincent de Paul Society of Allen County, Inc. to become an associate member of the charitable organization. She wouldn’t have to attend meetings, but it would enable her to continue helping with the parish food bank and filling out the necessary forms to refer people who came to the church office for assistance to the St. Vincent de Paul Store at 1600 S. Calhoun St. in Fort Wayne for free goods.

Simply saying “yes” and becoming a Vincentian “rather blindly,” she admitted, led her to begin attending bi-monthly SVDP conference meetings in the church basement and assuming the co-presidency, with her husband, of the 22 conferences representing 24 parishes. Three years ago, surprisingly running unopposed, Cheryl was elected district president, serving six counties in the Fort Wayne area. And in that capacity, the so-called “retiree” has accomplished a significant achievement for the 171-year-old association of Catholic lay men and women devoted to the spiritual growth of its members and personal service to the poor.

With an eight-year background in bookkeeping at St. Therese, Mowan eventually started looking into the thrift store’s finances since the facility had been in the red for many years. “Two things made it workable,” she said. “Some key managerial people were approaching retirement age, which gave us an opportunity to take things in a different direction, and mostly, we had a generous bequest that allowed us to refurbish the store.”

Mowan reasoned it was a long-term investment. “If we could get the store turned around to where it’s making a profit instead of a loss, then all of the profit — after the store is in good shape and well maintained — goes to help the poor,” she emphasized.

“It’s just been a total blessing,” she added. “I felt as though this whole thing was God-given. Every time I turned around with a question of how we were going to do this or manage that, it was just handed to me on a platter. Either the right person stepped forward or the money was there. It was an incredible miraculous process!”

“It’s like the perfect storm,” she continued. “I came into this job with some knowledge of accounting because of my parish experience and within the year realized something was amiss.” She related how, starting last July, they closed the store for two weeks and did a deep cleaning, which included hiring professionals to scrub floors, paint walls and “jazz it up with some graphics.” They fixed broken windows, repaired the elevator, added new signage and re-arranged the merchandise.

From August 2012 through the next six months, the store was in the black and paid off all its bills, including $35,000 owed the diocese for insurance and employee benefits, Mowan related proudly. “All of our accounts are current and we don’t have to borrow money from the district council to keep the doors open,” she emphasized. “It was a huge group effort with about 20 Vincentians from several parish conferences and other volunteers helping move furniture, clean, replace light bulbs, doors, sort merchandise and weed out enough unsalable items to fill five dumpsters.”

Traffic has increased in the store to the extent they now have to worry about having enough parking. Other projects in the works include installing an eight-foot security fence to discourage unauthorized weekend dumping of unsalable items. “Even useable goods often are ruined because of the weather,” she stated. New phone, announcement and security systems also are being installed. “It’s all a part of doing business in the downtown area. You have to be extra vigilant,” said Mowan.

“The worst is over. And it’s really been exciting to watch the store turn around and be proud of it.” They’ve created a Catholic Corner, giving away rosaries, books and videos. “We want people to know we’re Catholic,” Mowan added. “Even if I don’t run for re-election, I’m going to ask to be on the store committee because I’d like to see us open one or two more stores in outlying areas.”

One reason Mowan might not run for re-election concerns her health. In the midst of the workload, last December doctors discovered Cheryl has breast cancer. She’s halfway through six months of chemotherapy, followed by surgery. Besides being initially concerned whether she would live or die, “it has been a neat experience,” she said, “because of the outpouring of love, concern, cards, food and prayers by so many people. I just feel so lifted up,” she exclaimed. “Sometimes it brings me to tears!

“I’d like to encourage people who are fighting cancer to be positive about it and know all those prayer lines are touching and so humbling. You feel like you’re being blessed. It’s like God reaching out and caressing your face with His fingertips by all these people,” she concluded.