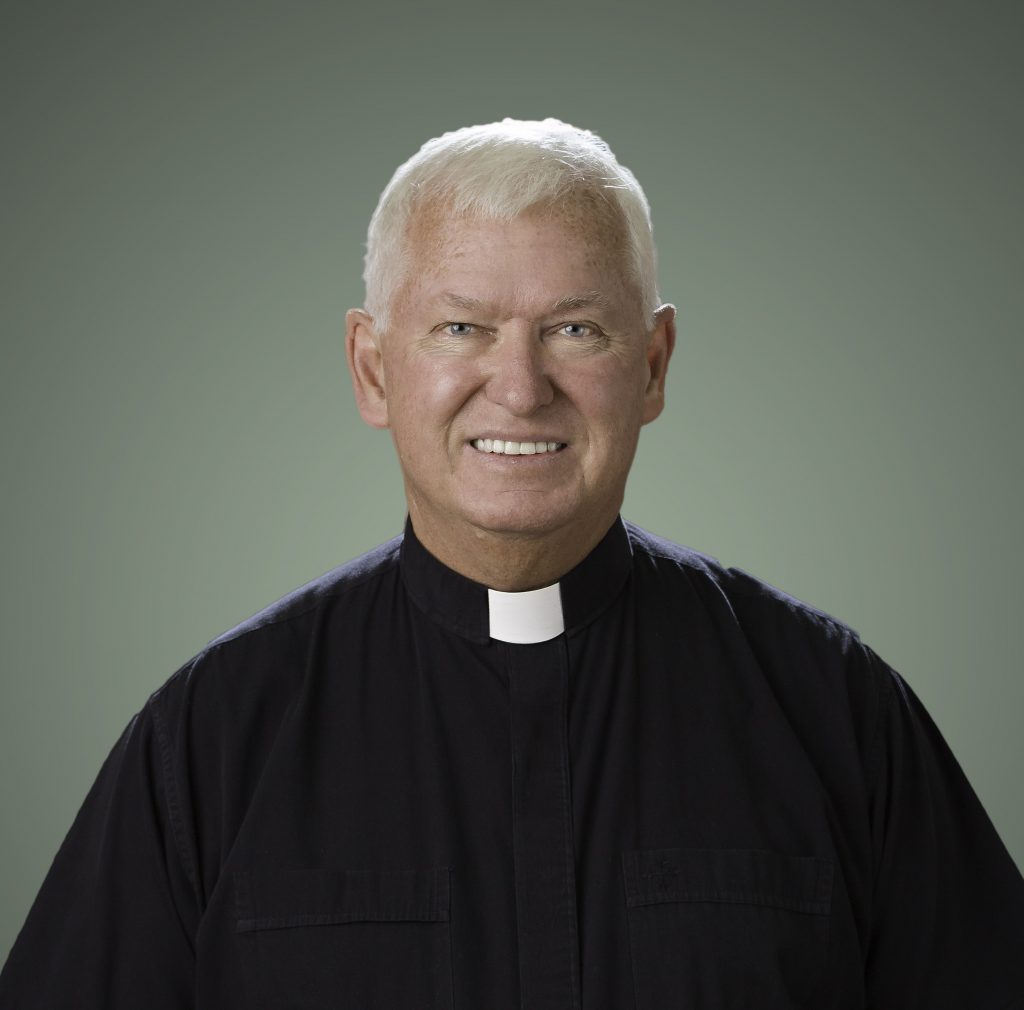 Over the span of 40 years, a person can gain a reputation for much good. In Father John Delaney’s case, his reputation is well-earned. He has become known as the priest who restored the parishes where he served as a pastor, having directed the renovations of several parishes through the years.

Father Delaney grew up as an only child in Fort Wayne, graduating from Sacred Heart grade school and Bishop Luers High School. Ordained in 1981 by Bishop William McManus, Father Delaney said that his vocation had originally been ignited by the religious sisters who taught at Sacred Heart.

“As you would expect, the sisters, who had a vocation themselves, were always encouraging vocations to either the priesthood or religious life. From little on up, that’s all you heard,” he shared. “Or they would recommend that you become a doctor or a nurse, a policeman — it was always a vocation that served people.”

Sister Dorothea, the school principal, had a particularly strong influence on him. She ensured he was able to attend Masses that were said for his mother, who passed away when he was 7. “She became kind of an example of what religious life and what a person who gives themselves to that will do, the kind of good person they are,” he said. Here, the seeds were planted that would finally take root when he was 25 years old and entering St. Meinrad Seminary and School of Theology in southern Indiana.

After working in the public sector for a few years, Father Delaney said he “felt like I wanted to do something more with my life,” he stated. “Always, in the back of my mind, was the whole idea of the priesthood or religious life. … I just felt like that’s where I wanted to put my life.”

It was when he was assigned to pastor St. Peter Parish in Fort Wayne that Father Delaney’s reputation as a gifted renovator began to take flight. In a complicated turn of events, he briefly found himself running three parishes. The now-demolished St. Paul was added to his pastorship, and when that parish was shifted to another priest, St. Andrew and St. Hyacinth were placed in his care, though the latter was soon closed and merged with St. Andrew until it also closed.

Now styling itself as “the splendor of the south side,” the Gothic-style St. Peter Church required significant updates when Father Delaney arrived at the inner-city parish.

“I think a lot of people thought I’d been sent by the bishop to close the parish and they were all worried. We completely turned it in another direction – and the neighborhood around it and for blocks away.”

Since the church had not had extensive work done for decades, and the rectory was in great need if repair, Father Delaney rolled up his sleeves and set to work raising funds and making the improvements. Beyond that, he attended numerous meetings with the construction company, bank and nearly every city leader about ways to improve not only the church property, but the area around it. The pastor of nearby Zion Lutheran Church became a partner in his efforts, which came to be known as the St. Peter’s-Zion Lutheran Project and was featured in local newspaper and magazine articles.

Father Delaney is particularly proud of the work that was accomplished in the area during his time at St. Peter. New homes built in the surrounding community, and ownership instead of rentals increased; landscaping improved; and services such as a new library, grocery store and Head Start program were brought to the area. An outreach ministry utilized the old school’s basement for packing sack lunches to distribute to neighborhood children and the homeless on the streets.

“Some people would probably say, ‘well, what did that have to do with church?’ But it showed the people around there that the church cared about more than just themselves,” he commented. “The church made a statement that it was here to help them have a better life and a better way of living and a safer neighborhood. If you’re going to be there, then you better be doing that.”

No matter their religion, people in the neighborhood came to respect Father Delaney and his work of restoration.

Those skills came in handy again when he was moved to St. John the Evangelist Parish in Goshen, a property also greatly in need of renovation and in the early phases of fundraising for numerous projects. Again, he spoke to parishioners who had been involved in the initial campaign, and renewed enthusiasm within the parish to begin new construction and some expansion — “to where other civic and church leadership in town said the parish had become a prominent place of beauty along the Main Street of town.”

After his time in Goshen, he was appointed pastor of Sacred Heart and St. Jude parishes in South Bend, engaging in restoration efforts at St. Jude during the past 16 years as well.

Father Delaney considers his reputation to be one of his greatest joys as a priest. “I seem to have enough of a gift for restoring things or renovating them … bringing life back into the parish, making it look respectable and representing the Church well.”

He has built a firm structure of faith, based on placing God first in his life, “trying to develop that relationship with all three persons of the Trinity at different times and in different ways, turning to how God has made Himself known to us, which is Father, Son and Spirit. There are different times when you want to be praying to one or the other, turning to them, asking for the guidance They can give.”