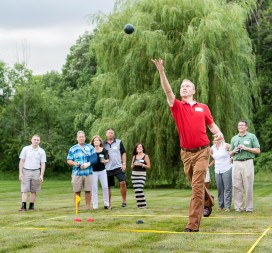 Joe Romie
Supporters of Redeemer Radio gathered on June 25 at the home of Mike and Susan Lee for the fourth annual “Viva Bocce! Classic,” a fundraising event that features friendly competition in the Italian lawn game of bocce (similar to bowling and horseshoes).
Shown is Father Ben Muhlenkamp, pastor of St. Louis Besancon, who throws a bocce ball for the DeHayes Group team. At left, seminarian Jay Horning awaits an opportunity to throw with the opposing team. Each team of four included a fifth member from the clergy or seminarians of the diocese. Father Muhlenkamp’s team went on to win the tournament.