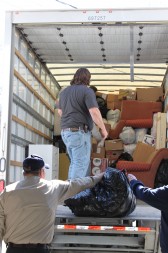 A 26-foot truckload of household goods and personal items donated by generous souls in Warsaw, Mishawaka, South Bend and Fort Wayne is unloaded at Queen of All Saints Parish in Beattyville, Kentucky. The cargo was in response to an article in Today’s Catholic describing the needs brought about by unemployment and hard times in a remote area of the state.

FORT WAYNE — In the 2014 Christmas issue of Today’s Catholic, an article titled “Blight Christmas” described two Catholic parishes on hard times in the hills of Kentucky and how, three years ago, their pastor, Father Joe Koury, showed up at Sunday Mass at St. Joseph-Hessen Cassel in Fort Wayne and appealed for aid for his parishioners.

His plea was heard by parishioners David and Sue Kistner, so Dave and his son Michael visited Kentucky and returned to Fort Wayne and organized aid to the area in the form of four truckloads a year of used household goods ranging from pots and pans to kitchen appliances all donated by St. Joseph parishioners. In describing what was needed, Dave Kistner asked for “anything you use yourself.”

One of the heart tugging reactions was the joy of girls who had never before had a prom dress and now had the thrill of seeing themselves in frills and flowers.

Today’s Catholic readers responded with typical generosity and Dave Kistner’s donor base expanded suddenly throughout Fort Wayne to Huntington, Warsaw, Mishawaka and South Bend, and when the truck left St. Joseph Parish at Hessen Cassel on its trip to Beattyville and Booneville, it was jammed with a large box of prom dresses, three wedding gowns, eight sofas, two large refrigerators, two table top refrigerators, one stove, three microwave ovens, eight beds, eight mattresses, a baby bed, three dressers, three or four recliners, an old pedal-style sewing machine plus many boxes of clothing that were desperately needed and much appreciated.

Beattyville poverty is as real as an empty cupboard — it’s where the bottom line has flat-lined and the nearest outreach programs are 75 miles away on stone roads to Lexington and the gas to get there is a separate problem. It’s where Father Joe becomes “Father” to all faiths in the community and beyond with his self-styled Queen of All Saints outreach to everyone as he distributes “Help from Hessen Cassel” supplies and low denomination Wal-Mart gift cards redeemable at a Wal-Mart 20 miles from Beattyville.

Catholics are a rare tribe in these parts. In the five or six years that Father Joe has been at All Saints, this Easter was the first RCIA (Rite of Christian Initiation of Adults) for the parish, so it was an extremely joyful occasion to celebrate the Baptism of four ladies all wearing prom dresses donated by students of Bishop Dwenger High School in Fort Wayne.

Kistner’s truck is empty on the return trip to Fort Wayne, but his heart is full of the appreciation and gratitude expressed by those whose needs have been fulfilled by the thoughtfulness and generosity of unseen, unknown others. As he hears the tires hum on the trip north, he reflects on the new comfort felt by a 10-year-old girl troubled by severe allergies, who now has her first bed and no longer sleeps on a dusty floor.

He smiles, recalling the joy of an elderly gentleman who formerly relied on others to cook cornbread because he had no stove. The old gentleman shed tears of appreciation at the thought of preparing his own soup and beans for every meal. It was difficult for him to realize that anyone could make such a huge gift as a stove.

Such stories of thankfulness for the kindness of others are endless as are the needs of those in this valley of poverty and unemployment. Needs there include personal hygiene items such as soap, shampoo, toothbrushes and toothpaste, feminine hygiene products, deodorant, razors and shaving cream, brushes and combs, bath towels and washcloths and toilet paper. Babies need diapers and wipes, baby food formula, baby bath, clothes, strollers, bassinets and baby beds. Kitchen needs are towels and dish cloths, potholders, dish soap, pots and pans, dishes and glasses, cups, utensils, coffee pots and coffee, toaster or toaster ovens, microwave ovens and tableware. Clothing is needed for all ages; newborn, children, teenager, adult, shoes and boots in all sizes, hats, coats and gloves for all ages.

The next truckload of help from Hessen Cassel will be in June. For those who would like to have a contribution on board, David Kistner can be reached by email at [email protected].