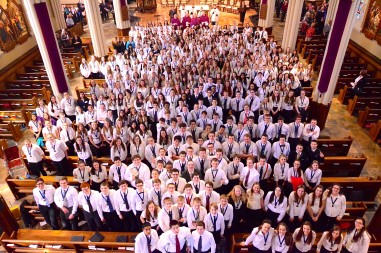 Almost 400 students from around the Diocese Fort Wayne/South Bend participated in the fifth annual Pueri Cantores Indiana Regional Mass and Choral Festival. They are shown after the Mass with conductor John Robinson in the back of the singers.

By Kay Cozad and Tess Steffen

NOTRE DAME — With beatific voices raised, students from across the diocese gathered at the Basilica of the Sacred Heart at the University of Notre Dame to perform at the fifth annual Pueri Cantores Indiana Regional Mass and Choral Festival on March 12. The 393 musically-gifted students in grades 4 through 12, from 30 diocesan Catholic schools, and several who are homeschooled, combined as one choir and represented just a small part of the thousands of youth singers from around the world in the American Federation of Pueri Cantores Festival.

Pueri Cantores is a century-old practice established in France in 1907, when a special boys choir was formed to sing during the liturgy.

The Indiana program, which was conducted by John Robinson, director of music at St. Paul’s Church and Choir School in Harvard Square, Cambridge, Massachusetts, began with a choral prelude showcasing the rich, traditional liturgical songs the choir had been rehearsing in both South Bend and Fort Wayne for the past several months. Robinson explained that personally the day was “very meaningful, and when you look at this huge crowd of young people singing so beautifully, it means that the future of Church music and worship through song is very bright indeed, and that is something we can all be very excited about.”

The students gathered early on Thursday and spent the entire day together in fellowship, song and prayer, noted Brian MacMichael, director of the diocesan Office of Worship.

The Pueri Cantores Indiana Regional Mass, which is the centerpiece of the festival, followed the choral prelude, beginning at 3 p.m. and was celebrated by Msgr. Michael Heintz, rector of St. Matthew Cathedral in South Bend. Holy Cross Father Peter Rocca, the rector of the Basilica of the Sacred Heart, and Msgr. Bruce Piechocki, pastor of St. Monica Parish, Mishawaka, were concelebrants of the Mass. The exquisitely sung sacred music was woven throughout the Mass.

Family members who were able to attend the Pueri Cantores Mass festival were also gratified and deeply moved. Rebecca Fitzmaurice, a parent with the Catholic Homeschoolers of Michiana, shared that she “loves it, and thinks it’s awesome to take part in the Church’s traditional music. It’s like heaven to hear their singing. The homeschoolers are pleased to be included each year in this diocesan event.”

The students who participated were impressed as well. Harmony Karapantos, a seventh grader from Most Precious Blood School in Fort Wayne, said, “It’s the most beautiful sound, and I’m excited to be back again.”

Her friend Kiya Robertson agreed, “I’ve never done it before, but I know it will be a great experience.”

Saint Joseph High School student Steve Mullaney told Today’s Catholic, “It means a lot to have everyone coming together to praise the Lord. Everyone’s voices together sound amazing!”

Our Sunday Visitor Institute was a sponsor for this year’s festival.