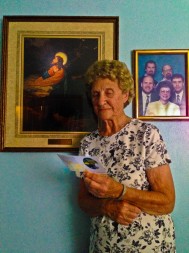 Genevieve Szynski, in her home in South Bend, prays the 91st Psalm from a prayer card she had printed for distribution. “I pray it every day, for my sons, my daughter, my grandkids and I also pray for our country.” She encourages everyone to read and pray the Psalm every day for protection.

SOUTH BEND — Genevieve Szynski’s family believes that “the family that prays together … wants everyone to pray together.” Or so her prayer card crusade would lead one to believe.

A personal prayer devotion turned ministry, Genevieve has been praying Psalm 91 every day for well over 30 years. It began soon after hearing the soulful testimony of a fellow prayer-group member giving an account of an encounter with death. Faced with the terror of an advancing tornado, “she knelt down, got her Bible and started reading the 91st Psalm, and it never touched her house. It went right around her.”

“Wow,” marveled Szynski, contemplating the power of Psalm 91 to protect her and her loved ones, “so I’ve been reading the 91st Psalm every day since. “

She described, with fervor, the feeling of the protective power of the Lord working in her life as a result of her devotion. From near-misses on the highway to emerging unscathed from a collision that demolished her car, “and a lot of little bitty things that have happened, I knew that the Lord was with me all the time.”

The joy of such trust might have been enough for 87-year-old Szynski, but it would seem that the Lord has commissioned her to share the Psalm with the world. “I was praying my 91st Psalm and the Lord put it on my heart to have the Psalm printed and to pass it on to others,” she proclaims. Not knowing the first thing of modern technology, design or printing, she called on her daughter Bridget Beutter for help. “She told me in January, I had one year to do it!” Beutter relates.

Originally, Szynski thought to make only enough to share with her five children and 16 grandchildren. The card would be a Christmas present. They were each to be given two, one for the home and one for the car, and each was to promise her to pray it every day — once at home for security and protection and once in the car for safety during travel. But soon 42 prayer cards turned into 1,000 when Szynski learned that her son and granddaughter intended to support the survivors of the Boston Marathon Bombing by attending this year’s race — on the one-year anniversary of the tragic event.

So son, Chris, and granddaughter, Sarah, along with Genevieve caught a plane and soon found themselves distributing the cards to as many as would accept them in the streets of Boston. Her offerings were all met with acceptance and gratitude. Since then she has come to believe that the Psalm should be distributed far and wide. Packets of 25 each have been sent for distribution to residents of nursing homes in Florida, friends in the Virgin Islands as well as victims of the wildfires in San Diego.

But wherever Genevieve is, is territory to be evangelized. “If we meet somebody and we think they need the 91st Psalm,” she explains, “we take one out and give it to them.” No one has ever refused.

“I find it fascinating that someone mom’s age is ministering to people,” daughter Bridget Beutter confides. But it seems that this ministry is calling other generations of the family to the task. Granddaughter Olivia Szynski is also a devotee of Psalm 91 and a card-distributing member of the ministry.

A recent graduate of Indiana University, South Bend, 22-year-old Szynski’s concentration of study in the criminal justice system makes her friends and teachers obvious candidates for the Psalm 91 prayer card. Many of her teachers have performed difficult and dangerous work within the criminal justice system and she feels strongly that “just giving it to them and having them think about asking for protection” is an extremely worthwhile thing to do. “Because a lot of people just want to start their day and don’t think to ask for protection and ask God to keep them safe throughout their day. I feel that giving them this prayer card really helps a lot,” she shared.

Genevieve would like to share her prayer cards with anyone who would like to have one. Please send a self-addressed, stamped envelope to: Genevieve Szynski, P.O. Box 164, South Bend, IN 46624 and she will send a prayer card. Any testimonies to the protective power of Psalm 91 in the lives of those who have prayed it would also be welcome at [email protected] or “like” her on facebook by searching Psalm Stories, South Bend, Indiana.