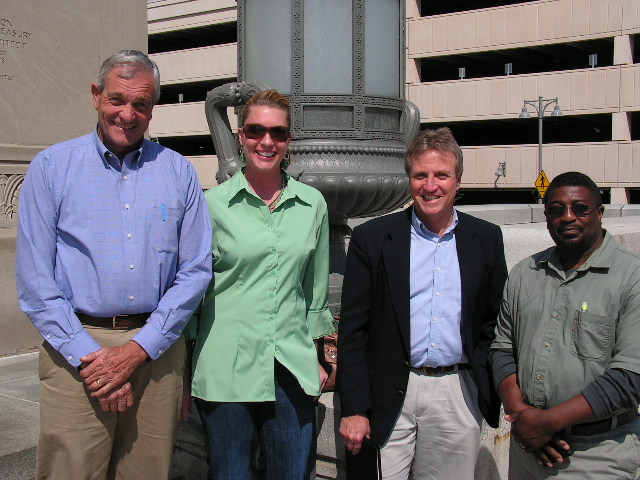 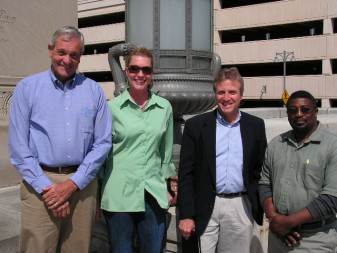 Mick Lomont, left, poses downtown with Executive Director Tomi Cardin, and directors Jim Stoppenhagen and Gonzalee Martin outside the chambers of Judge Lee before meeting to explain the goals and purpose of their FBMM program.

NEW HAVEN — At 70, Besancon native, Mick Lomont keeps plenty busy both on and off his family farmstead. Still very involved in the day-to-day activity of his grain operation just east of New Haven, Lomont may consider retiring one day. However, when it comes to serving on the board of directors for the Faith-Based Mentoring Ministries (FBMM), Lomont feels his work has just begun.

“Things are really taking off,” beams the lifelong member of St. Louis Parish.

FBMM’s main mission is assisting Allen County felons being released back into society by providing employment opportunities, housing options and tools for connecting to other community groups providing assistance.

The group also strives to mentor each participant in growing their relationship with God, their families and ultimately, themselves. Referring to the fact that the nonprofit organization recently received their first federal grant monies or that they are currently running inaugural workshops for incarcerated inmates are big reasons FBMM is finally getting off the ground.

In 2007, Lomont invited a small group of men to his family pond to discuss his vision of what he felt was a growing need in the community. After over a decade of volunteering at the Allen County jail as a book cart attendant and in other roles, Lomont continually heard inmates lament about having no place to go once they got out of jail.

“It hammered on me week after week to hear the same story and weighed heavy on my heart to see big strong men in the prime of their life, basically, rotting away in jail,” admitted Lomont. Lomont witnessed firsthand the hardships incarcerated persons face when they are released from inside jail cells to the outside world — families distant themselves, landlords don’t care to rent to someone with a record and employers don’t want to interview felons. Society, in general, tends to shy away from words like jail, prison and felony.

FBMM founder Lomont also witnessed firsthand many inmates who truly wanted to turn their lives around, truly wanted a relationship with God, truly deserved a second chance.
The process started slowly, but in January of 2009, the group hired a part-time executive director, Tomi Cardin, who Lomont describes as the perfect “cheerleader.” The passionate Cardin, along with a committed group of directors and key advisory board members, have been instrumental in moving Lomont’s dream forward. By July 2009, FBMM, who is blessed to be housed in the Associated Churches office, were coined with their 501(c)3 status and had applied for numerous grants.

Cardin explains, “We are being molded as we go. We are narrowing our vision from not only recruiting and training, but matching mentors who help ex-offenders achieve another chance in life, enabling them to transition from inside to out. Other organizations out there assist with housing, some agencies focus on employment opportunities, but in addition to these important steps, FBMM also makes spreading the Gospel and leading the inmates to Christ a high priority.”

Lomont is afraid the average felon won’t make it on his own. “Without follow-up, someone to support them and stick with them, and bringing God into their lives, their chances are slim,” he adds.

Allen County averages 860 inmates on a daily basis. Cardin points out another astounding statistic — nearly 80 percent of these inmates return to the “system” within six to 12 months of their release. This has a huge financial impact costing Allen County $43 per day per inmate and the Indiana Department of Corrections right around $35,000 per year. When instead of causing such a costly burden on society, these same individuals could be gainfully employed, paying taxes and supporting the local economy, and most importantly, being reunited with their families and becoming fathers again.

FBMM’s goal is to cut this recidivism rate to 25 percent. While it sounds lofty, Cardin knows of successful programs that have done even better. “We don’t need to reinvent the wheel. There are a lot of great wheels out there already. We just want to attach our wagon.”

Partnerships with employers are a crucial factor in making reentry a success. Because they believe a direct correlation exists between gainful, sustained employment and the ability of a former inmate to remain crime-free, the FBMM brochure states that quickly getting offenders into full time employment upon release is good for employers, offenders, their families and every citizen of Allen County and the state of Indiana.

Some of the first projects FBMM are focusing on are character building workshops and on-the-job training programs. Through these, participants are not only given the skills and the courage they need to become the best they can be, but mentors and volunteers can experience the joy and blessing of helping a brother or sister in Christ in their desire to change.

The first phase includes inviting incarcerated men at the Chain O’ Lakes Correctional facility in Albion to attend a workshop with hopes of building an early relationship prior to release. Prisoners are currently transported to the Stillwater Retreat Center in Yoder once a week for a morning of training, a home-cooked lunch and an afternoon of spiritual guidance. With increased funding, FBMM hopes to increase the visits to two to three times per week for enhanced effectiveness.

Cardin details, “Out of pure fear, many ex-offenders do not even attempt to navigate their way through a simple food pantry. We can teach them how. We can show them ways to fill out applications, teach them computer skills. We can be their friend.”

Lomont concludes that a fellow board member, Bob Wearley, summed it up precisely, “These chaps just need a father.”

FBMM is currently seeking volunteers to serve as mentors, drivers to provide transportation and of course, financial support from both businesses and individuals on a one-time or regular basis. Both the Sojourners Group and Rekindle the Fire program at St. Vincent de Paul Parish have been contacted, while others across the diocese are also jumping on board. For more information contact Tomi Cardin at 602 E. Wayne St., Fort Wayne, IN 46802 or at (260) 446-2205.