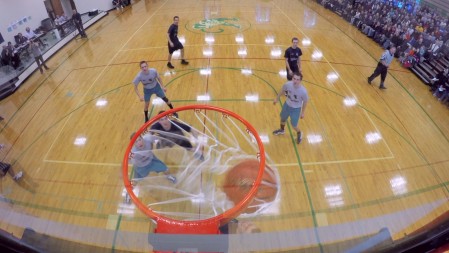 Diocesan priests and seminarians took to the hardwoods for the first Cupertino Classic basketball game on Monday, Dec. 29, at St. Vincent de Paul gymnasium in Fort Wayne. The priests defeated the seminarians, 41-26.

With an estimated 400-500 in attendance, spectators filled the gymnasium’s bleachers and many more watched from the floor surrounding the court.

Donations from the classic amounted to $1,000, which will go to the diocesan Vocation Office for seminarian tuition, according to Father Andrew Curry, pastor of St. Robert Bellarmine Parish in North Manchester, and organizer of the Cupertino Classic.

“The event was marked with a spirit of joy and sportsmanship,” said Father Curry. “The priests were happy to be able to play basketball together, which hasn’t happened in a while.”

The Cupertino Classic was inspired by St. Joseph of Cupertino, a prayerful, simple priest from the 1600s renowned for having visions from God. While sometimes in prayer, people saw the saint float off the ground.

Father Curry recalled a painting capturing one of those moments where it looked as if St. Joseph of Cupertino is going up for a “slam-dunk.”

“So we had Nate Proulx (from the Special Ministries Office of the Diocese of Fort Wayne-South Bend) design a basketball in his hands and a rim above his head for our poster and T-shirts,” Father Curry said.

He noted, “Not only do we want to see some good moves on the court at the game but we also thought that the humble and prayerful St. Joseph of Cupertino would give the right spirit for the game. Not only that, he is one of the patron saints of students.”

Highlighting the game was Father Terry Coonan’s overall movement with the ball. Father Coonan, parochial vicar at St. Pius X, Granger, sported behind-the-back passes and spun the ball around himself for a lay-up. He started this early in the game, which set the crowd on fire quickly.

He and his brother Father Matt Coonan, pastor of St. Vincent de Paul Parish, Elkhart, had some steals that led to fast breaks.

“Father Matt is always a tenacious forward and plays well on both sides of the court,” Father Curry said.

Father Jake Runyon, pastor of St. Jude Parish, Fort Wayne, was impressive with his down-low playing on offense and defense.

“Father Jake is bigger than the seminarians but he can run, box out and even shoot the outside jumper,” Father Curry said.

The seminarians had some impressive players, especially Ben Landrigan and Dan Niezer, “but it was obvious that the seminarians as a whole had not played together as long as the priests had. Experience over youth, I guess,” noted Father Curry.

Another highlight was when the seminarians let a young man from the bleachers play in the last couple of minutes of the game and amazingly hit the last second shot.

Father Curry said the basketball game, which he anticipates will become an annual tradition, has several goals that are surfacing.

He said, first, that it provides the chance for priests and seminarians to play basketball together, which is difficult sometimes with their schedules.

Secondly, he added, “It gives people the chance to bring their family and friends to the game to celebrate our diocesan Christian family in a non-liturgical event.”

“This allows young people to see that priests are people who like to do the good things that people like to do,” Father Curry said. “This, hopefully, makes it more accessible for young people to contemplate being a priest or a religious. Next year we are hoping to have a halftime free-throw contest between religious sisters.”

And thirdly, Father Curry said, there is also a fundraising component that could grow from this.

Looking forward to next year, he expects to have some T-shirts for sale, anticipating the money would go towards seminarian education.

Father Curry said, “We would like to thank Mr. Terry Coonan of St. Vincent’s for helping us set up the game at St. Vincent rather quickly.”

Using social media to promote the event, “with about a week to go before the game, we knew that we could expect a lot people to be in attendance based on interest we saw on our Facebook event page,” Father Curry said. “We were thinking we would have about 200 people at max. But when people kept pouring in the doors, it got the priests and seminarians very excited about the event and gave us hope that this event could be an exciting way to celebrate our faith in Jesus Christ.”

Due to the large attendance at the game, Father Curry said, “We are hoping to have next year’s game at one of the Fort Wayne Catholic high schools to accommodate an even bigger crowd.”