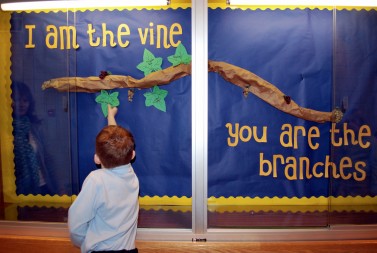 Using the Scripture from John 15:1-8, second-grade students from Queen of Peace School attach messages on the branch that indicate how they can remain a part of the vine.

“Receiving Holy Communion connects, in the Person of Christ, our love of God and love of neighbor.” — Father Daniel Scheidt

Catholic second-grade teachers throughout the Church are preparing their students to receive their First Communion. At Christ the King in South Bend and Queen of Peace in Mishawaka, teachers are using several methods to explain the Eucharist in tangible ways for students.

Religious education catechist Liz Slatt, who has been an instructor at Christ the King for 27 years, notes that a teacher’s example in the classroom is a good avenue to explain the Eucharist. “The way you treat the children and get along with the kids is important. This helps to show that Jesus is a human person that went to school, helped his parents and then did the work of the Father. Christ is the focus leading up to the Eucharist and Christ is the sacrifice,” Slatt said.

Queen of Peace School vice principal Ann-Marie Kankel, who is also the school’s religion teacher, noted that students are instructed in the Catechesis of the Good Shepherd program. “Through Catechesis of the Good Shepherd we meditate on several parables. The parables help to deepen their understanding of the connection between the Bible and the liturgy and strengthen their desire for the Eucharist,” said Kankel.

One of the parables used for instruction at Queen of Peace is John 15:1-8, where Jesus identifies Himself as the vine and His disciples as the branches. Queen of Peace school second-grade teacher Gabriella Byall explained to the children when the sap inside the vine has a blockage, the branches are damaged, the same way sin and bad choices damage us. When asked by Byall what the children could do to remove the blockage, students replied with answers such as going to Confession and Mass, and loving one another.

In addition to workbooks, other tools are used in explaining the Eucharist. “(At Queen of Peace) we use expanded meditations on the gestures of the Mass with special focus on epiclesis. We also review the Last Supper and the Origin of the Eucharist,” said Byall.

Kankel added, “We discuss this historical event and the words spoken by Jesus during the Last Supper and His wish to remain with all people of all times.”

Slatt, who comes from a Polish background, used one of her family’s cultural traditions in describing the Eucharist to her students at Christ the King.

“At Christmas I make Oplatek bread which is similar to communion bread; very thin and white with no taste. We share the bread with each other and make good wishes for the future and forgiveness if anything had happened during the past year,” she explained.

“It is symbolic of unity and the Eucharist. I presented the bread to the children at Christmas and told them the bread was food for the spirit,” she added.

Parental involvement is essential in the first Communion preparation. Both parishes participate in a retreat where parents are encouraged to volunteer to help in the workshops. In addition, family time in prayer and discussion are encouraged at home.

“In addition to reading some Bible verses, we talk and pray about how we can live the way Jesus wants us to, and how to be good peacemakers in Jesus’ image,” Harges said.

Slatt recalled that her own family called this experience “Jesus Time.”

“I closed the door to the dining room and we lit our candle, said our prayer, and worked on our workbook. No one could come in and bother us,” Slatt recalled.

Father Daniel Scheidt, pastor of Queen of Peace Parish, offers his reflections on the contrast of children’s reactions to receiving ashes on Ash Wednesday and their encounter with the Eucharist.

“It has been my yearly Lenten experience as a priest that small children are often scared of the ‘black thumb’ coming toward their foreheads on Ash Wednesday; they seem to recoil instinctively from the mortal fact that we are dust and unto dust we shall return,” said Father Scheidt.

“Yet on the other hand, I constantly see so many little kids, even infants, reach out with their hands for the Sacred Host of Holy Communion as it is given to their parents. It is as if the children have been given the graced intuition not only that the Lord is near, but that He is also theirs, as they are His,” he concluded.