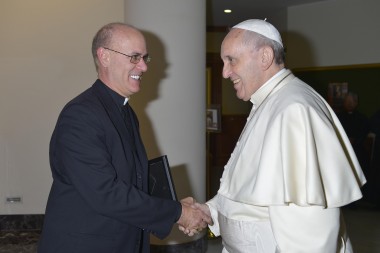 After the celebration of Mass Monday morning, Nov. 24, at the chapel at Domus Sanctae Marthae, Bishop Kevin C. Rhoades was greeted by Pope Francis. Bishop Rhoades concelebrated the morning Mass, reading part of the Eucharistic Prayer in Italian. After Mass, Bishop Rhoades greeted the pope, assured the pope of prayers from the diocesan faithful, offered thanks for the pope’s ministry and shared the enthusiasm for the pope’s upcoming September visit to the U.S.

VATICAN CITY — Bishop Kevin C. Rhoades was a concelebrant of the 7 a.m. morning Mass on Nov. 24 with Pope Francis at the chapel in the Domus Sanctae Marthae, where the pope lives. Bishop Rhoades read part of the Eucharistic Prayer in Italian.

The bishop is in Rome with a contingency from Saint Mary’s College and President Carol Ann Mooney, who were expected to arrive in Rome this week for a presentation of a report titled “Voices of Young Catholic Women” to the pope.

In a telephone conversation with Bishop Rhoades on Nov. 24, he told Today’s Catholic that the Mass, celebrated in Italian, was very simple and very prayerful. He said there were about 40 people in attendance and about half were priests. Bishop Rhoades was the only bishop at the Mass.

“I was very moved by Pope Francis’ homily,” Bishop Rhoades said. Pope Francis spoke of the day’s Gospel (Lk 21:1-4) of the poor widow who gave all that she had — two small coins or mites — to the Temple treasury, while the rich offered their surplus wealth. The pope spoke of how the widow is an image of the Church.

“I like to see the Church in this figure, the Church which is, in a sense, a widow, because she is waiting for her Bridegroom who will return,” Pope Francis said.

“But she has her Bridegroom in the Eucharist, in the Word of God, in the poor, yes: but she is still waiting for His return,” Pope Francis added. “This is the attitude of the Church.”

“This widow was not important. Her name did not appear in newspapers. No one knew her. She did not have any degrees. Nothing. She did not shine her own light,” he said, according to Vatican Radio.

“When the Church is humble and poor, then ‘it is faithful’ to Christ, giving all it has for the Lord and others, leaving nothing for itself,” reported Vatican Radio.

Pope Francis said the Gospel captures two tendencies always present in the history of the Church. Church tempted by vanity and the ‘poor Church,’ which, the pope said, “must have no other riches than her Spouse,” like the humble widow.

Pope Francis said, “Let us pray to this widow, who is certainly in heaven, to teach us to be the Church like this, giving everything we have in life: leaving nothing for us. Everything for the Lord and for others. Humble. Without boasting of having our own light, always seeking the light that comes from the Lord.”

After Mass, Bishop Rhoades said all gathered in the chapel in quiet prayer with the pope. Pope Francis then greeted Bishop Rhoades.

Bishop Rhoades assured Pope Francis of the prayers of the diocese and the pope offered his blessing upon the Diocese of Fort Wayne-South Bend. Bishop Rhoades thanked Pope Francis for his ministry to the Church and said he looked forward to his visit to the United States in September for the World Meeting of Families.

Bishop Rhoades said Pope Francis asked for the prayers of the diocese.

Bishop Rhoades told Pope Francis he can count on our prayers.