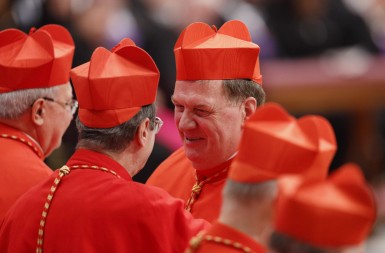 VATICAN CITY (CNS)— The Catholic Church’s 17 new cardinals must dedicate their lives to being ministers of forgiveness and reconciliation in a world — and sometimes a Church — often marked by hostility and division, Pope Francis said.

Even Catholics are not immune from “the virus of polarization and animosity,” the pope told the new cardinals, and “we need to take care lest such attitudes find a place in our hearts.”

Creating 17 new cardinals from 14 nations Nov. 19, the pope said the College of Cardinals — and the Catholic Church itself — must be a sign for the world that differences of nationality, skin color, language and social class do not make people enemies, but brothers and sisters with different gifts to offer.

Three of the new cardinals created during the prayer service in St. Peter’s Basilica were from the United States: Cardinals Blase J. Cupich of Chicago; Kevin J. Farrell, prefect of the new Vatican office for laity, family and life; and Joseph W. Tobin, whom the pope asked to move from being archbishop of Indianapolis to archbishop of Newark, N.J.

After reciting the Creed and taking an oath of fidelity to Pope Francis and his successors, each cardinal went up to Pope Francis and knelt before him. The pope gave them each a cardinal’s ring, a three-cornered red hat and a scroll attesting to their appointment as cardinals and containing their “titular church” in Rome. The assignment of a church is a sign they now are members of the clergy of the pope’s diocese.

Speaking to Catholic News Service after the consistory, Cardinal Tobin said the pope’s homily was “very timely” and the cardinals, as well as all Catholics, should “examine ourselves and the Church to see whether we have unconsciously appropriated this ‘virus’” of polarization and animosity. It may hide under “the name of truth or the name of orthodoxy or something, when it actually serves to divide. I think probably that is resistance to the acts of the Holy Spirit.”

As the Year of Mercy was ending, Pope Francis called on the new cardinals — and everyone present in the basilica — to continue to proclaim “the Gospel of mercy,” going out to where people live, giving them hope and helping them become signs of reconciliation.

At the end of the consistory, the College of Cardinals had 228 members, 121 of whom are under the age of 80 and eligible to vote in a conclave to elect a pope.