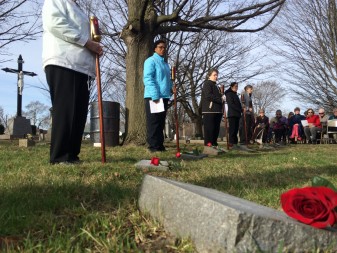 The Poor Handmaids of Jesus Christ, with friends and family attend a prayer service Sunday, April 12, at the Catholic Cemetery at Liberty and Jefferson streets, where Poor Handmaids are buried.

Visit the photo gallery for more photos by Kevin Haggenjos.

SOUTH BEND, MISHAWAKA — An entire weekend of activities was planned for the Poor Handmaids of Jesus Christ Coming Home to South Bend/Mishawaka area.

Julie Dowd, communications director for the Poor Handmaids of Jesus Christ, said this was the third such event — the first in southern Illinois and the second in Fort Wayne. The next “coming home” event is scheduled for Chicago. The sisters will finish in Donaldson where the motherhouse is located.

The purpose of the events, according to the sisters, is to reconnect with those who have walked with them over the years — former sisters, employees — as well as to give the public a chance to meet the sisters and learn about the order and the impact they’ve had on the community.

Nearly 50 people attended the reunion lunch on Saturday at Marian High School in Mishawaka — some coming from Michigan and the Chicago area to visit. Throughout the Marian High School gymnasium displays, timelines and photos highlighted the history and presence of the sisters in the South Bend and the Mishawaka area dating back to 1878.

In the Poor Handmaids’ extensive history, the sisters were at the Vincent House at St. Vincent de Paul Parish from 1976-1991, in Elkhart. They were also involved with Good Samaritan Center and Elkhart Adult Basic Education.

In Granger, their presence is ongoing at St. Pius X Parish and School where Sister Marie Heppeler teaches second grade — the last teacher from the order in the area. She and Sister Connie Bach are the only two sisters in the order living in the South Bend-Mishawaka area. In 2009, Sister Colleen started Bachworks, a music therapy ministry.

In Mishawaka the sisters had a major presence, starting at St. Agnes in 1871 and St. Joseph Parish and School from 1880-2006. The Poor Handmaids founded St. Joseph Hospital in Mishawaka and had teachers at St. Bavo Parish and School, St. Monica, Queen of Peace, Marian High School and Mishawaka Catholic. They were also involved in Healing Arts Center on the River, Ancilla Health Care Systems and Penn-Harris-Madison School District. One of the sisters even became a cosmetologist.

In South Bend, the list includes many of the parishes, St. Anthony Home Nursing, the Justice and Peace Center and St. Joseph County Parks, as well as at the University of Notre Dame.

Several of the sisters spoke of their time in South Bend and Mishawaka as being their “favorite” and said they had “fantastic memories of St. Bavo’s and St. Monica’s.” A couple of former sisters attended with family members and the long-time dietician from St. Joseph Hospital came to visit with the sisters.

Attendees shared lunch and a power point presentation was shown illustrating the beginning of the order. Their mission is to “embrace the charism of an attentive ear (listening to God’s will and the needs of the world) and a courageous heart (to respond with a bold and generous heart).

After the luncheon and time for visiting, a festival for the public was planned with a game area set up for children, a choir concert and ice cream social later in the day.

On Friday evening, the sisters partnered with the young adult group at St. Pius X in Granger. About 40 young adults from several parishes came together as two sisters and two married couples gave a talk on discernment — not just for a religious vocation but discernment for single or married life and general discernment of God’s will. They also spent time in Eucharistic Adoration, and enjoyed praise and worship music, which included a song written by Sister Colleen titled, “Surrender.”

On Sunday, a prayer service was planned for 9 a.m. at the Catholic Cemetery at Liberty and Jefferson streets at the site where Poor Handmaids are buried. Father Ted Franzman celebrated a 10 a.m. Mass in the Bishop Crowley Activity Center at Marian High School, followed by a brunch.

The sisters also visited several schools while in town for the reunion. At their peak number in 1928, the congregation included 4,556 living members. That number today is 606 worldwide with 90 sisters in the American Province.

The Poor Handmaids of Jesus Christ also have an associates community and Fiat Spiritus, a Christian community of single and married baptized men and women called to live according to the charisms of the order and its founder Blessed Catherine Kasper.