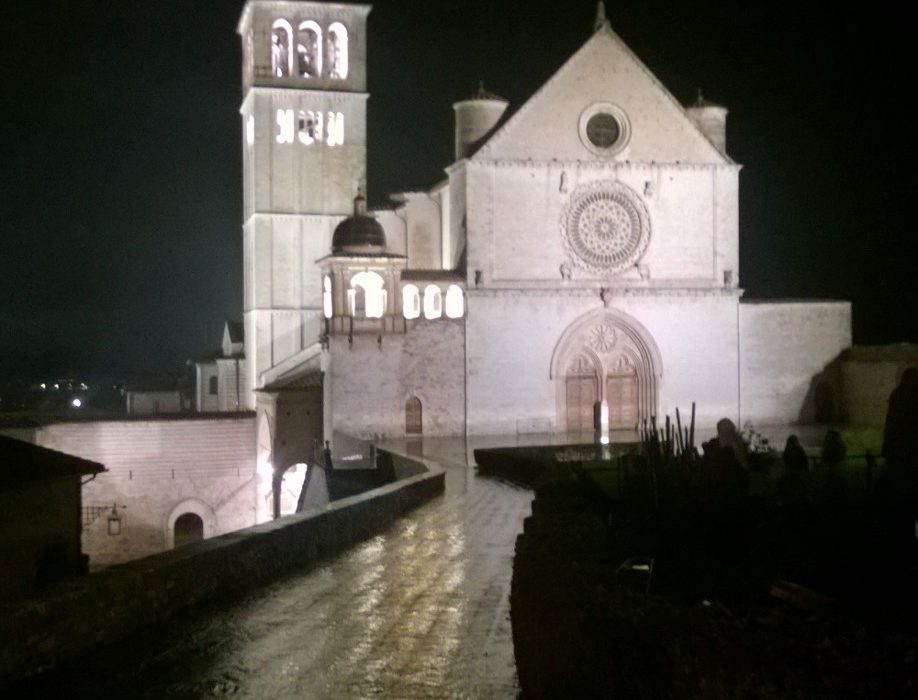 Bishop Kevin C. Rhoades spent two days in Assisi, time for prayer, reflection and hiking. He celebrated Mass each day in the 13th century Basilica of Saint Francis, in the Lower Basilica on Nov. 27 and in the crypt chapel at the tomb of Saint Francis on Nov. 28.

I’d like to share with you in this additional column about my recent pilgrimage to Rome and Assisi during Thanksgiving week. The reason for my trip was to present to our Holy Father, Pope Francis, President Carol Mooney and a student representative from Saint Mary’s College who presented to the Pope 250 letters from young Catholic women of Saint Mary’s College and throughout the United States. The letters contained many beautiful and touching reflections by these young women about their Catholic faith. They also shared their ideas for “the new evangelization” of women their age in the United States. The Pontifical Council for the New Evangelization supported this project and arranged for the presentation at the end of the papal audience on November 26th.

While in Rome, I had the opportunity to celebrate Mass for the Saint Mary’s students who are studying for a semester or year abroad in Rome. They got up early to attend the Mass at the beautiful Basilica of Sant’Andrea della Valle, near their hotel. Deacon Royce Gregerson, a seminarian of our diocese studying in Rome, served as deacon at the Mass. I was happy to spend some time with Deacon Royce and also with Father Francis Chukwuma who is working on his doctorate in canon law at the Lateran University. Father Francis, a priest of the Diocese of Awka, Nigeria, has served in our diocesan tribunal and also as pastor of Saint Joseph Parish in Bluffton. Both Father Francis and Deacon Royce are happy and doing well and, of course, working hard in their studies.

It was a joy and an honor to meet Pope Francis twice during the week. I concelebrated Mass with the Holy Father in the chapel of his residence on November 24th and spoke with him after Mass. He gave a beautiful homily on the Gospel of the poor widow who gave all she had in the temple. The Pope spoke of how the poor widow is an image of the Church and our calling. Then I was able to meet him again on November 26th at the end of his public audience. On both occasions, I spoke to the Holy Father a little about our diocese and asked for his blessing upon the priests and faithful of our diocese. On both occasions, Pope Francis humbly asked for our prayers. On Wednesday, he shared with me that he needs our prayers. I can only imagine the heavy responsibilities of the Pope. I promised him my prayers and told him I would share his request for prayers with you.

At the papal audience, I sat next to Archbishop Amel Nona, the Chaldean Catholic Archbishop of Mosul in Iraq, and Bishop John Vadakel of Bijnor, India. We spoke for about an hour before the audience began. I was deeply moved by the conversation with both bishops. Bishop John Vadakel’s diocese is a Syro-Malabar Catholic Eparchy in the north of India in the Himalayan Mountains. Less than one tenth of 1 percent of the population is Catholic (3,705 Catholics among 3.5 million people). They live in some danger from Hindu extremists. His is truly a missionary diocese, yet the diocese runs 26 Catholic schools, 12 health centers, and other social service institutions.

Archbishop Nona’s archdiocese has been decimated by ISIS. Some of the faithful have been killed. The previous archbishop was kidnapped and murdered in 2008. There were over 25,000 Catholics in the Mosul Archdiocese before the 2003 war. Before ISIS took control earlier this year, there were approximately 10,000 Catholics. Almost all have now fled. There are hardly any Catholics left in his archdiocese, so Archbishop Nona leads and serves them “in exile,” so to speak. Many live in churches, schools, and refugee camps in Kurdistan, northern Iraq. The archbishop now lives in the city of Irbil where the largest number of his faithful now reside. Archbishop Nona told me that he doesn’t have much hope that his people will return to Mosul even if ISIS is expelled, since the Christians were already living in danger and persecuted prior to the invasion and occupation by ISIS. He said that radical Islamic extremists were already residing in Mosul and had welcomed ISIS. The Archbishop, however, has some hope that some of his people may return to smaller villages in his archdiocese where there had been good relations between Christians and Muslims.

Archbishop Nona and I shared the hope of staying in touch. I was thinking that perhaps we can help him and the archdiocese of Mosul in future rebuilding, if indeed they return and try to rebuild their churches and communities.

I was grateful to spend two days of prayer in Assisi before returning home this past Sunday. I was grateful to celebrate Mass at the Tomb of Saint Francis. And I prayed for all of you in both Rome and Assisi.

May this season of Advent be for all of us a time of joy and prayer!