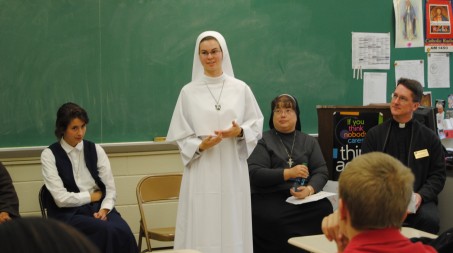 Religious gather to discuss their vocations with the students of Bishop Luers High School in October of 2013.

The laity and the educational institutions of the Diocese of Fort Wayne-South Bend all share a role in fostering religious life and vocations. Some schools, such as St. Pius X in Granger, have adopted seminarians as a project. St. Vincent de Paul Parish in Fort Wayne has a strong vocation identity that has paid “dividends” with priestly vocations. And diocesan high schools have made vocation days and the presence of religious a priority.

“Each time the group meets they pray, eat and discuss a book they are reading, then pray some more,” Schuerman said.

In the last four years, four men with connections to the parish have been ordained. Father Matt Coonan, Father Terry Coonan and Father Chris Lapp are all sons of the parish, and Father Ben Muhlenkamp was on the core team for the parish’s Life Teen youth group.

“Their examples got the ball rolling and others thinking about the possibility,” Schuerman said. “Currently we have 11 men in the seminary being formed for diocesan Priesthood, with a few others discerning their vocations in various religious orders and three in formation for religious life.”

“We also encourage those who are in the seminary,” Schuerman said. “We pray for them, priests usually visit them, school kids send cards and letters, parishioners might send them gifts and cards, they get involved in the liturgies when they are home, etc.”

The parish has a catechetical night once a year for the middle school and high school youth groups “where various priests and religious are invited to speak with our teens,” Schuerman added. The school also promotes vocations.

Even the parish’s upcoming Vacation Bible School will foster vocations in youngsters as young as four years old.

With the theme “Parade around the Our Father,” Schuerman reported, “the fifth day (of the VBS) will be devoted to introducing religious vocations to the pre-k through fifth-grade children in ways they are able to understand. They show the fun side of priests and get them to understand that priests are people too. Having fun is not just for kids. Some priests are on bowling leagues, swim, play basketball, coach, jump on trampolines and roller blade. This brings excitement to the children. The craft projects for the week will reflect vocations as well.”

“In our parish a culture exists where every young Catholic man and woman is expected to consider and pray about the possibility of a vocation to the Priesthood and religious life,” Schuerman noted. “As a priest, Father Andrew simply talks about it with them. He will ask a young man if he is going to be a priest. He’ll usually respond ‘I don’t know,’ which is good because it means he is open to the possibility and not just saying no.”

Another powerful witness is when Father Budzinski finds someone open to the possibility about a priestly vocation, “he takes off his collar and gives it to the person as a gentle reminder to pray,” Schuerman said.

Schuerman is a member of the vocations committee, which started a Shepherds of Christ group in the parish 14 years ago. The group meets every Tuesday at 6:30 p.m. in the Blessed Sacrament Chapel, praying a rosary, some litanies and specific prayers for priests and religious vocations.

At St. Pius X School, Granger, one of Catholic Schools Week’s highlights is the Adopt-a-Seminarian program.

“The Adopt-A-Seminarian program is an all-school project that allows students to participate in a school-wide stewardship program, while learning more about the path toward Priesthood,” said Betsy Quinn, the director of stewardship and evangelization at St. Pius X Church. “Students grow in their knowledge of what a seminarian is, what they do and what they are working toward, by participating in the program each year.”

Each St. Pius X School classroom is given a seminarian’s name and a list of their personal “favorite things” including such categories as hobbies, music, books, teams, stores, snacks/desserts and beverages.

Students write letters, make cards and pray for their seminarian. The students enjoy creating care packages that are shipped to the seminarians with some of their favorite items and the special letters and cards made by the students.

“The students delight in receiving thank you notes, thank you videos and even visits from some of their ‘adopted’ seminarians,” Quinn said. “St. Pius currently has a parish priest that was once adopted by a kindergarten class from St. Pius.”

Quinn added, “Understanding one’s gifts and responding to God’s call to share those gifts in a life-chosen vocation requires deep reflection and self-awareness over time. Discerning a call to a religious vocation is a delicate and unique process involving the same.”

St. Pius X School focuses on providing opportunities for students to reflect on their gifts.  Students learn to share their special talents with their school and greater community.  “Ultimately, the hope is that students will be able to translate those gifts into their own personal life’s call from God,” Quinn said.

Donna Quinn, public relations director at Saint Joseph High School in South Bend, told Today’s Catholic, “We have Vocation’s Day each October. On this day we have an all-school Mass, which is concelebrated by visiting priests. Several religious — priests, brothers, seminarians and sisters from various orders and diocesan priests — come spend the day with the freshman and juniors in the theology classrooms.”

Quinn said, “We will also have a group of seminarians spend the day with us later this spring.”

Adding to the atmosphere that fosters religious vocations, a Holy Cross seminarian has been teaching with teacher Megan Vera at Saint Joseph School, noted Quinn.

“We have a Vocation Awareness Day every year in October, sponsored by the diocesan Vocations Office, headed by Msgr. Bernard Galic,” Mathias said. “Msgr. Galic and members of his staff plan the day, which begins with an all-school Mass for the entire student body, at which Msgr. Galic celebrates and preaches about vocations.”

This Mass is followed by invited priests, sisters and brothers visiting the theology classrooms of freshman and junior students and offering brief presentations and question-answer sessions.

“This is always a wonderful day for the students to have an opportunity to reflect on their vocation in life,” Mathias added.

In past years at Bishop Luers, Sister Lois from Sisters of St. Francis of Perpetual Adoration in Mishawaka came on a regular basis and met after school with young ladies interested in religious life.

Another Bishop Luers pastime to promote vocations has been the lunchtime Pizza with Padres for the young men who would have lunch with the school’s priest chaplains and then a general discussion.