DICKSON, Tenn. (CNS) — Mikey Schachle, who turned 5 in May, climbs onto a stump in the yard of his family’s home in Dickson.

He carefully takes stock of the short distance to the trampoline buried in the ground below him, then slowly steps off the stump into space and falls happily onto the trampoline as some of his 12 brothers and sisters surround him with smiles and hugs.

It’s a scene that would have been impossible for his parents, Dan and Michelle Schachle, to imagine five years ago when they sat in a doctor’s office to hear that their still unborn son had zero chance of living more than a few days or weeks.

It took a miracle to save Mikey.

On May 27, Pope Francis approved the promulgation of a decree recognizing Mikey’s cure from a deadly case of fetal hydrops while still in his mother’s womb as a miracle attributed to the intercession of Father Michael J. McGivney, founder of the Knights of Columbus.

With the approval of the miracle, Father McGivney, who now has the title of “Venerable,” will be beatified and receive the title “Blessed.”

The Schachles like to tell people they met in prison. Michelle was a single mother with twin daughters working in the office of the chief of security at South Central Correctional Facility in Clifton, Tennessee, and Dan was working as a guard. 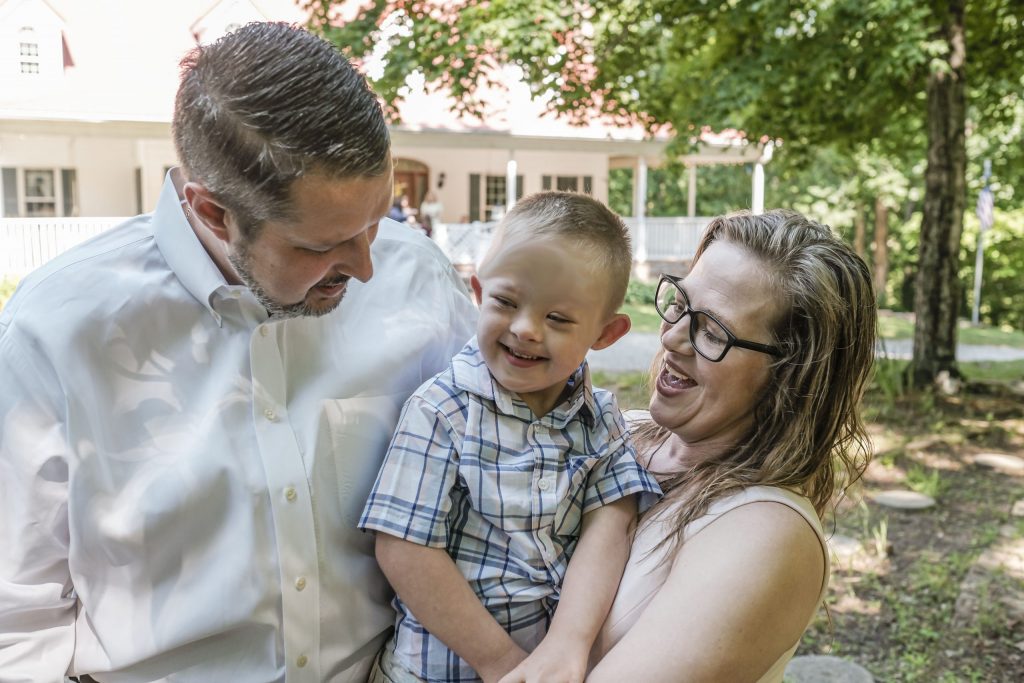 Daniel and Michelle Schachle hold their son Mikey, 5, near their home in in Dickson, Tenn., June 2, 2020. Five years ago, Dan and Michelle prayed to Father Michael McGivney, founder of the Knights of Columbus, to intercede with God to save their son, still in his mother’s womb, who was given no hope of surviving a life-threatening case of fetal hydrops. (CNS photo/Rick Musacchio, Tennessee Register)

Their friendship blossomed into a romance and they were married Sept. 20, 1997. Michelle’s daughters were 4 years old. “Dan married the three of us,” she said. After marrying, Dan adopted the two girls.

Michelle had decided to become a Catholic, and on their wedding day she entered the Church.

“At first I kind of struggled with Mary, which is funny to me now,” considering her family is consecrated to the Blessed Virgin, Michelle said.

Praying to saints was another feature of the Catholic faith that was difficult for her to accept at first. “It just seemed to be wrong to go through anybody but Jesus,” she said.

One aspect of Catholic teaching that Michelle had no trouble accepting was respect for life. “When I became Catholic, right to life was something I could grab on to,” she said.

With a little time, Michelle began to fully embrace all the teachings and devotions of the Catholic Church, and they became a lifeline when she needed them most.

As their family grew, Dan started looking for a new business opportunity and became a life insurance agent for the Knights of Columbus. He joined the Knights in 1994 and served as the Grand Knight of Council 8083 at his home parish, St. Mary Church in Savannah, Tennessee.

“The last thing I ever imagined myself being was a life insurance agent,” said Dan, now the general agent for the Knights’ insurance program in Tennessee, Kentucky and the eastern half of Arkansas, overseeing the work of 16 agents. “But once I read about Father McGivney and why he set us up, it was really eye-opening to me. It was love of women and children that drove him to start the Knights of Columbus.”

Late in 2014, Michelle became pregnant with Mikey, their 13th child. Dan and Michelle hadn’t planned on having such a big family. “We said yes to God one at time,” Michelle said.

Michelle’s midwife at the Vanderbilt Women’s Health program in Nashville referred her for an ultrasound. On the last day of 2014, she was undergoing the ultrasound when the doctors found markers indicating the child had Down syndrome, which is caused when a person has an extra chromosome.

But the doctors saw some other troubling signs and sent Michelle for more tests. On Feb. 25, 2015, the doctors told the Schachles their child might not survive.

The baby had a severe case of fetal hydrops, a life-threatening condition of an abnormal buildup of fluids in the tissue around the lungs, heart or abdomen or under the skin.

He pressed the doctor for a percentage on the chances their son would live. “She finally said, ‘I’ve been doing this for 30 years and I’ve never seen anybody survive,’” he said.

The doctor told them “to have hydrops and a chromosomal diagnosis together, it’s over,” Michelle recalled.

The doctor tried to reassure them. There was no hope for their child, so they shouldn’t feel guilty about terminating the pregnancy. The Schachles were told they could induce delivery right then or “let nature take its course,” Michelle said.

“I didn’t like either one of those decisions,” Dan said. “It made me mad. My job as a dad is to protect my children, not to kill them.”

The condition was not only a threat to the baby but also could cause serious complications for Michelle, their doctor told them.

For Michelle, the concern was delivering a child stillborn, something that had happened when she was younger. “I became so afraid of delivering another baby stillborn,” she said.

There was a moment when she asked herself, is it really an abortion if there is no hope? She quickly told herself yes it would be. “It was only a spit second, and then it was gone.”

“We can both understand parents falling into that decision,” Dan said.

Instead, Dan and Michelle turned to Father McGivney for help. The Knights of Columbus have been promoting his sainthood cause since 1997 and the Schachles were members of the Father McGivney Guild, an organization established to support the cause.

As they were alone contemplating the news they had just received, “Dan was quiet for a moment,” Michelle remembered. “He looked at me and said, ‘Father McGivney needs a miracle. I just prayed that if Father McGivney saves him, I’m naming him Michael.’”

Until then, the couple had planned to name the child Ben.

The Schacles also had some powerful prayer partners. As they prepared for a Knights-sponsored pilgrimage in March 2015 to the Vatican, Spain and the Shrine of Our Lady of Fatima in Portugal, they sent out emails to as many people as they could, asking them to pray for the intercession of Father McGivney to save their son.

Throughout their pilgrimage, the Schachles also prayed for his intercession. Priests offered Masses for them in Rome and back home at their parish in Dickson, St. Christopher.

Four days after the Schachles returned home from the pilgrimage, Michelle went back to the doctor’s office for another ultrasound to check the baby’s fluid levels and the status of the hydrops.

“I was pretty scared,” Michelle said. “The ultrasound technician, she kept looking and looking, she was taking a long time.”

The technician eventually showed Michelle an ultrasound picture of the baby’s face with none of the swelling and fluid buildup that was so apparent on the last ultrasound. “This is the prettiest baby I’ve ever seen,” she told Michelle.

Dr. Mary-Anne Carroll came into the room to talk to Michelle about the ultrasound. Michelle had never met Carroll before, having dealt with other doctors in the practice.

“She started talking about this and that, about what we’re going to do when the baby is born,” Michelle said. “I said what about the fluid in the lungs? She said, ‘A lot of babies have a little fluid in the lungs. It’s called wet lungs.’”

“Wait a minute, I was told there’s no hope,” Michelle said.

She consulted with her colleagues who confirmed the baby no longer showed any signs of fetal hydrops. “That was a very interesting and potentially unexplained finding,” said Carroll, who now practices at the Texas Tech University Health Sciences Center in Lubbock, Texas. “It was an unexpected finding.”

Without knowing the history of the case, “I would not have put together that this baby had hydrops,” Carroll said.

“It was just there and then it was gone,” Michelle said. “Then we were just pregnant with a baby with Down syndrome.”

“Michael was perfect just the way he was,” Michelle said.

Mikey was still facing serious health issues. Like many babies born with Down syndrome, Mikey had a heart condition that required surgery, which was performed seven weeks after he was born. He spent 71 days in the hospital.

At six months, he also nearly died because of a respiratory illness that kept him in the hospital for about six weeks more before he recovered.

Today, his health problems are under control and he is an active 5-year-old. “He’s a healthy little boy,” Dan said.

“We know this isn’t anything we’ve done,” Dan said. “Millions of people have been praying for Father McGivney. We’re the happy beneficiaries.”

“We have Michael,” Michelle said. “Michael’s life has changed our life.”

Andy Telli is managing editor of the Tennessee Register, newspaper of the Diocese of Nashville.