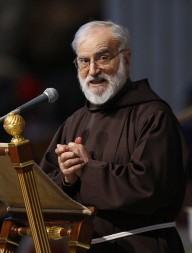 Capuchin Father Raniero Cantalamessa, shown here in this April 2, 2010 file photo delivering the homily during the Good Friday service in St. Peter’s Basilica at the Vatican, was the keynote speaker at a recent celibacy symposium sponsored by the Institute for Church Life at the University of Notre Dame and the Committee for Doctrine of the USCCB.

NOTRE DAME — The preacher to the Pontifical Household in the Vatican headlined an impressive lineup of speakers at a Feb. 15-17 symposium at the University of Notre Dame that examined priestly celibacy.

Capuchin Father Raniero Cantalamessa started the event with a keynote talk that called for a deeper understanding of celibacy based on biblical and theological roots so that celibacy is seen as “a freely accepted commitment and a gift of grace,” not simply a functional discipline that frees a man for ministry.

Msgr. Stephen Rossetti, a psychologist who has studied the priesthood, closed out the symposium with the good news that a solid majority of priests embrace celibacy as a benefit to their priesthood, especially those with a good understanding of the theological-Scriptural basis for celibacy.

In between the opening and closing speakers, two archbishops and several theologians spoke about the biblical and theological roots of celibacy and how a richer understanding of celibacy results in happier priests who are better able to shepherd their people.

Archbishop Allen Vigneron of Detroit presented a paper on “The Virginity of Jesus and the Celibacy of His Priests.” The archbishop said that the people of God need to be educated about the worth of priestly celibacy. The fact that Jesus lived in a state of virginity is “a sure point of reference” to understand the tradition of celibacy in the Church, he explained.

The covenant between God and His people is nuptial, he continued, for God espouses His people, and Jesus gave His virginal self to the Church and to no one else. Thus, celibate priests share this identification with Christ and serve as heralds of the new evangelization.

Archbishop J. Peter Sartain of Seattle presented his paper on “Celibacy and the Pastoral Ministry of the Priest.” He said that the mystery of the Lord is revealed in priestly celibacy in four ways: By being a man of prayer and staying close to God; by living celibacy as an abiding presence of Jesus and as a sign of single-hearted commitment to loving God and His people; by being a good father to his pastoral family, making a gift of himself to the Church; and by his participating in the sacrifice of Christ through the Eucharistic celebration.

Mary Healy, an associate professor of Sacred Scripture at Sacred Heart Major Seminary, spoke on the biblical foundations of celibacy. She said that in the Old Testament, celibacy as a religious ideal did not exist because marriage and children were considered a “primordial blessing.”

However, in the New Testament the entirely new concept of a “fruitful virginity” was introduced at the Annunciation, she explained. Later, Matthew, the evangelist, speaks of remaining unmarried for the kingdom of heaven as a gift given by God. And Jesus Himself implies that celibacy for the good of the kingdom is rooted in His own mystery, “the God who desires to wed His people,” with the ministry of the disciples being a participation with Jesus, the bridegroom, she said.

Jesuit Father Joseph Lienhard, professor of theology at Fordham University, traced “The Origins and Practice of Priestly Celibacy in the Early Church.” The reasons for embracing celibacy in the early Church were threefold, he explained: eschatological — celibacy for the sake of the kingdom; theological — the Church is the bride of Christ who brings forth children from the font of Baptism, and the celibate priest is committed fully to the bride Church; and Christological — the priest acts in the place of Christ, who is a model for celibacy.

Msgr. Michael Heintz, director of the Master of Divinity Program at Notre Dame and rector of St. Matthew Cathedral in South Bend, talked about “Celibacy and Human Formation.” He said that too often celibacy is discussed only in terms of sexual renunciation. Rather, celibacy should be viewed positively as a charism, a gift, a grace that is freely and joyfully chosen so that the priesthood can be shared with, and on behalf of, others.

Father Carter Griffin, vice-rector of Blessed John Paul II Seminary and director of vocations for the Archdiocese of Washington, spoke on “The Fatherhood of the Celibate Priest.” We are accustomed to thinking of Jesus as the Son, he said, but Jesus is also a father in his own right, for the virginal Jesus acts as a father in providing physical and spiritual food, teaching, healing, protecting and generating children for the kingdom of Heaven.

Thus, the celibate priest, who is configured to Christ, is appropriately called “Father,” for he is a sanctifier, teacher and shepherd who begets children for eternal, heavenly life. It is the “greatest privilege” of a priest to exercise this supernatural fatherhood, Father Griffin said.

“In an age that struggles with priestly identity, this is a compelling and refreshing way to grasp our identity as priests,” he said, for celibacy is “not a burden, but a gift to be treasured.”

The final presentation of the symposium was given by Msgr. Stephen Rossetti, clinical associate professor at The Catholic University of America, where he also is associate dean for Seminary and Ministerial Programs. He is author of the book “Why Priests are Happy: A Study of the Psychological and Spiritual Health of Priests” (Ave Maria Press, 2011).

Msgr. Rossetti said that his studies show that priests are happier than their lay counterparts, and he has the data to prove it. His 2009 survey showed that 92 percent of priests expressed happiness with their lives. Likewise, 75 percent of priests say that celibacy has been a grace for them, while only 15 percent said they would marry if the Church allowed it. The youngest priests were the most supportive of celibacy, which he attributed to the younger men being more theologically conservative and better trained in a richer understanding of celibacy during seminary.

As priests become more knowledgeable in this area, celibacy is disappearing as “a hot-button issue” among clergy in the United States, Msgr. Rossetti said.

The symposium was sponsored by Notre Dame’s Institute for Church Life and the Committee for Doctrine of the United States Conference of Catholic Bishops, with the assistance of Lilly Endowment’s Sustaining Pastoral Excellence Program. Ave Maria Press will publish a book containing the symposium papers this fall that will be available from the publisher and most booksellers.