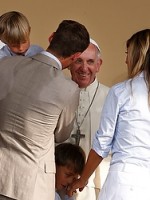 Pope Francis greets family members during a gathering with young people in Piazza Vittorio in Turin, Italy, June 21. The working document for this fall’s Synod of Bishops on the family called for expanded discussion and pastoral solutions to challenges such as how economic disparity and environmental degradation affect families as well as the impact of infertility, aging and disability. (CNS photo/Paul Haring)

VATICAN CITY (CNS) — The working document for this fall’s Synod of Bishops on the family called for expanded discussion and pastoral solutions to challenges such as how economic disparity and environmental degradation affect families as well as the impact of infertility, aging and disability.

The Church seeks to address the actual and concrete situation of today’s families, who are “all in need of mercy, beginning with those who are suffering the most,” the document said.

The Vatican released the 77-page document, called an “instrumentum laboris,” June 23 in Italian during a news conference. Translations into other languages are still being worked on.

Pope Francis convoked the Synod of Bishops on the family for Oct. 4-25; it is to be the conclusion of a process that included a discussion within the College of Cardinals and an extraordinary Synod of Bishops last October.

The synod’s working document is a compilation the final “relatio,” or report, that had been approved by the bishops during the extraordinary assembly in October and includes further “responses, observations and contributions” received from bishops’ conferences, religious congregations, Vatican offices, academicians, lay organizations and other members of the Church.

“Even though the proposed synthesis” cannot include the “richness” and the “sizable amount” of input sent to the Synod of Bishops from every continent, “the text is able to offer a reliable reflection of the perceptions and expectations of the entire church on the critical subject of the family,” the document said.

As a result of the broadened input, there are an additional 85 paragraphs added to the 61 paragraphs of the final “relatio,” thereby offering further considerations and areas of discussion for the next synod focusing on: “The Vocation and Mission of the Family in the Church and Contemporary World.”

The bulk document, therefore, reflected the enormous variety of problems most families deal with today.

The question of the church’s approach to Catholics who are separated, divorced, divorced and remarried, cohabitating or in civil unions also received detailed attention with a strong focus on the importance of “graduality” and helping those Catholics see the beauty and fullness of a sacramental, indissoluble marriage.

Coming to this understanding and acceptance of the church’s vision of marriage cannot come from a simple solution; it must come from a process of “maturation” that needs to be led and cultivated by the church and its members without compromising its Gospel ideals, it said. Several references were made to paragraph 84 of St. John Paul II’s apostolic exhortation, “Familiaris Consortio,” on the role of the Christian family in the world, which reaffirmed Church practice of not admitting divorced and remarried Catholics to communion, but encourages them to be present and active in other aspects of church life.

The working document said, “Acquiring the awareness that the family according to God’s plan is not a duty, but a gift” comes with the help of the Holy Spirit, dialogue, prayer and accompaniment during this process of maturing in the faith and conversion.

While recognizing the limited, fragile and sinning nature of humanity, the document emphasized the Church’s message remains rooted in the truth of Christ and his unique approach — that of healing all who suffer and welcoming all who sin with the command to “go and sin no more.”

The document calls on Church members to live without judging others and with an attitude of respect and mercy, referring to it as an “art” that requires wisdom and skill.

It proposed offering “specialized centers” for priests and religious to offer them additional formation in a ministry of “consolation and care” as well as greater support for lay associations, movements and families courageously living a sacramental marriage so they can better reach out to and help those who are struggling.

There was a strong call in the document for “promoting common pastoral guidelines” that can still address all the varied and disparate situations of families.

A lack of a common approach “contributes to growing confusion and division, and creates searing pain for those who are living a failed marriage, as often they feel unjustly judged,” it said.

However, the working document went well beyond the usual hot-button issues and fleshed out numerous strengths and weaknesses of today’s cultures and families that are meant to guide discussions in October.

“Taking care of wounded families and helping them experience God’s infinite mercy is considered by everyone to be a fundamental principle,” the document said.

The task is urgent not only because families are more fragile and vulnerable given the loss of cultural and spiritual values, it said, but, on top of that, social and political structures have fallen short in coming to people’s aid.

Some additional issues that have been proposed for discussion include:

— The dignity of aging, role of grandparents as “apostles” of the faith and hidden helpers of families.

— Disabilities, death of a family member or spouse, addictions in the family.

— Gospel as hope, not a “crushing” yoke, representing Jesus’ “indissoluble” love for humanity.

— Prayer, politeness and pardon in the family, willingness to ask for “outside help.”

Cardinal Lorenzo Baldisseri, general secretary of the Synod of Bishops, told reporters at a Vatican news conference that the synod fathers requested that the next synod “avoid the long series of interventions of single members, as in previous synods.”

They also asked that “greater value be given” to the small working groups and spreading discussions over time rather than lumping them all together, he said.

The cardinal said each week of the three-week synod will treat the three different sections of the working document respectively: listening to the challenges family’s face, discerning the vocation of the family, and the mission of the family today.

The final week will include time to prepare a final text that will be submitted to the pope, he said.

This method, he said, “will assure, all those entitled, to intervene in the hall, including during the hour at the end of the day, and will allow more time” for the small working groups.

“Often the Holy Father has recalled that the synod is a place in which the Holy Spirit can act. It is not a parliament. The Synod Fathers are invited to express themselves with ‘parresia,'” or with boldness and courage, he said.

Synod Fathers also “will be free to communicate with media at their discretion and responsibility,” he added.