Ever since last year’s Class 1A State Championship game – a 6-5 defeat to Guerin Catholic – these two words have driven the Saint Joseph boys lacrosse team and served as its rallying cry.

“We lost in sort of a heartbreaking fashion last year by one goal, and it sort of was an everyday reminder that one goal is the difference between winning and losing,” said Indians fifth-year head coach Sam Margulis. “But also, as a team, we have one goal of working towards getting to that championship game and winning it.”

On June 4, these two season-defining words took on a new meaning. Saint Joseph avenged last year’s loss with a dramatic 8-7 victory over Guerin Catholic in the Class 1A State Championship game at Hamilton Southeastern High School in Fishers. It came by the thinnest of margins against the same team that had handed the Indians heartbreak the year before – and Saint Joseph players and coaches wouldn’t have had it any other way.

“That’s all I was looking forward to all year,” said senior captain Charlie Eckrich. “This entire year, Guerin was in our crosshairs. I don’t think the championship would have been right if we had played another team.”

“It was the revenge tour,” confirmed Margulis. “The whole season, that was our goal. We wanted to play them, and we wanted to beat them.” 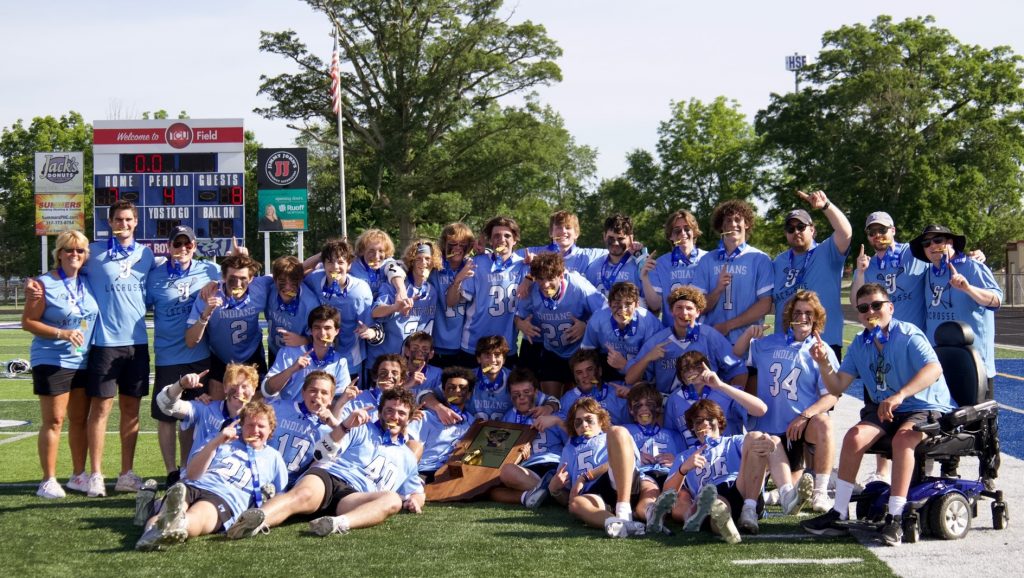 This proved to be no small task for the Indians. Despite topping Guerin Catholic 13-11 in a regular season matchup, Saint Joseph found itself on the wrong end of a 6-3 score halfway through the state championship game. It was clear that something had to change in order to shift the momentum in the Indians’ favor.

“We sat in the locker room at halftime, Coach gave a speech, and we looked each other and said, ‘All we need is one goal more than them,’” recalled Eckrich. “We came out firing and decided, ‘This is our game.’”

“In the first half, we were more passive – but in the second half, we were the aggressors,” said fellow senior captain Carter Michaels. “We were taking it to them instead of them taking it to us. We weren’t afraid to go at them.”

This confidence came from a handful of halftime adjustments that Margulis and company employed to perfection. First, the Indians moved two long sticks to cover Guerin Catholic’s midfield attackman, preventing him from getting the ball in the second half. Saint Joseph also brought its defense together to play closer to the net and not overcommit. Finally, Margulis inserted Steven Eckrich at goalie, and the junior responded with nine saves – limiting Guerin to one goal the entire second half.

Meanwhile, the Indians’ offense awoke and scored three consecutive goals to tie the game with just over a minute remaining. Both teams lined up for a face-off at midfield, and that meant it was sophomore Jack Tobolski’s time to shine.

“We have the best face-off guy, in my opinion, who’s also an incredible athlete and a good goal scorer,” Margulis said of Tobolski. “He won the ball forward to himself, ran right down the middle of the defense, and just put it in for the go-ahead goal.”

Charlie Eckrich said Tobolski’s heroics were nothing new to his teammates.

“This entire year, when we needed a goal, I’d walk up to him and say, ‘You know what you need to do,’” said Charlie. “I did that this time, and ten seconds later, the ball was in the back of the net. It was wild.”

“It was awesome to watch,” echoed Michaels. “To score two goals for the win seventeen seconds apart, it was just electric.”

The Indians survived the final 55 seconds – and a premature celebration – to capture the program’s first-ever state title in its fifth appearance in the championship game. While Saint Joseph is set to move up a class to 2A next season, Margulis is confident his team can still compete at the highest level, thanks to a whopping 18 incoming seniors.

“Since I’ve joined the program, this has been a goal: to make this program into a winning program,” said Margulis. “When they split the league up into two divisions, I saw an opportunity that this team could get a win, get a championship, get the first one in program history.”

“It was the best feeling ever,” said Michaels. “We’d been working at it ever since the clock hit zeroes last year. For all of our hard work to pay off, it meant everything.”

“It was the perfect way to end our season,” agreed Charlie. “It was a really strong way to leave our mark and say, ‘Hey, don’t mess around with Saint Joe.’”