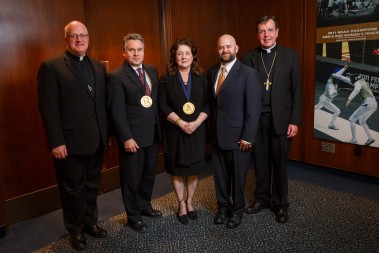 From left, Holy Cross Father Bill Lies, Notre Dame’s Vice President for Mission Engagement and Church Relations, is shown with Congressman Chris and Marie Smith, recipients of the Evangelium Vitae Award, Carter Snead, the director of the Center for Ethics and Culture, and Archbishop Allen Vigneron of the Archdiocese of Detroit.

NOTRE DAME — Congressman Chris Smith of New Jersey and his wife, Marie, were awarded the 2014 Notre Dame Evangelium Vitae Medal at a festive banquet at the University of Notre Dame April 5.

The medal has been awarded annually since 2011 to honor individuals for affirming and defending the sanctity of human life from its earliest stages. The award was inspired by Pope John Paul II’s 1995 encyclical, “Evangelium Vitae” (“the Gospel of Life”) and is presented by the University of Notre Dame Center for Ethics and Culture and the Notre Dame Fund to Protect Human Life.

The award decree, read by Notre Dame Law Professor Carter Snead, who is director of the Center for Ethics and Culture, cited both Smiths for their “rich public service to build a culture of life.” That service began with their college days at Trenton State where they met and were leaders of the student pro-life group. Congressman Smith has served in the House of Representatives for 32 years, 30 of which he has been chairman of the House Pro-Life Caucus. Marie Smith is director of the Parliamentary Network for Critical Issues and has served on the Holy See’s delegation to the United Nations.

Quoting “Evangelium Vitae,” the award citation said that the Smiths had fulfilled the duty of civic leaders to build a society that recognizes the dignity of each person and protects the lives of all: “You have both fulfilled your ‘duty to make courageous choices in support of life, especially through legislative measures’ whether through the sponsorship and enactment of legislation or through the support, advice and counsel provided to leaders here and abroad,” the citation read. The citation also noted that the Smiths had engaged with the full range of life issues confronting society today: abortion, embryo research, cloning, physician-assisted suicide, euthanasia, human trafficking and attacks on religious liberty and conscience.

In her acceptance remarks, Marie Smith discussed the efforts of abortion advocates who manipulate treaties and declarations to tie abortion to sustainable development goals and to market abortion internationally as a so-called human right.

“They operate as if abortion has already morphed into a recognized human right,” she said.

These activists, as well as abortionists themselves, are increasingly depicted as human rights defenders, she said, a category designed to give them a privileged status deserving of special government protection, especially in countries where abortion is against the law. Some offices at the United Nations and the Organization of American States support this effort, she said.

“Such designations convey undeserved respectability and legitimacy on the abortion industry and distort the truth,” she continued. “Truth is a victim of the international campaign for abortion, as are the hundreds of millions of children who have been killed and the countless women who have been wounded physically, psychologically, emotionally and spiritually through the violence of abortion.”

Congressman Smith discussed some of his efforts in Congress to remove abortion funding from the Affordable Care Act, efforts rebuffed by the Senate and President Obama. Of the 112 plans on the health exchanges, he said that 103 plans subsidize abortion. He also referred to President Obama’s broken promise at the Notre Dame 2009 graduation that he would protect conscience rights in the health law.

“Rather than honor conscience rights, the president dishonors people of conscience and employs coercion,” he said.

The congressman spoke of religious freedom being under “vicious assault,” something he thought would never happen in this country. He said the present is a “difficult and challenging time,” an age of double-speak when our moral and spiritual foundations seem to be rapidly cracking. “To defend Judeo-Christian values in modern times, especially in the public square, makes both our message and our mere physical presence unwelcome and unwanted,” he said

“Yet, our faith in Christ comes with a holy burden to be truth-tellers,” he said, following what Bishop Fulton Sheen called “Our Lord’s footprints in a darkened forest.”

He called the culture of death “a decades-long megatrend in society,” making inroads across the world, and he discussed some of the international issues he has encountered. He said many politicians, doctors, journalists, academics, environmentalists, misguided clergy and some human rights groups like Amnesty International and Human Rights Watch are in the “forefront in promoting abortion and the LGBT agenda.” While masquerading as “enlightened and progressive,” their intolerance disenfranchises the weakest and most vulnerable members of society, Congressman Smith said.

However, they will not have influence forever, he continued, for the culture is changing, and the younger generation is emerging as the most pro-life ever. The availability of ultrasound has made most people aware of the humanity of the unborn child, he said, and the murder conviction of abortionist Kermit Gosnell last year alerted many people to the horrors of abortion.

Much remains to be done, he continued, encouraging the audience to go forward and “take up this cross,” for it is a “race” to save lives. Some ways to do that he said, are to consider public office as a “faith-filled ministry,” to work in the media to expose the reality of abortion, to educate policy makers and to network with other prolife people.

“We can win this … and we have a sacred duty to protect these children and their mothers and the culture of life,” he concluded, “and it’s a matter of when, not if.”

At the invitation of the Center for Ethics and Culture, Archbishop Allen Vigneron of Detroit was the celebrant for the Mass that preceded the banquet. Also attending the event was the first recipient of the medal, Richard Doerflinger, associate director of the Secretariat for Pro-Life Activities of the United States Conference of Catholic Bishops.

In 2012 the medal was awarded to pro-life leader and law professor Helen Alvare. Last year the 2013 award was given to the religious community, Sisters of Life. The next medal winner will be announced on Respect Life Sunday, the first Sunday in October.