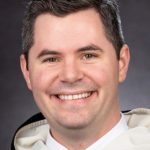 Episode 5 of Amazon’s new series, “The Lord of the Rings: The Rings of Power,” opens with a haunting melody composed for the show. “This Wandering Day,” sung by Poppy Proudfellow (a Harfoot hobbit), and concludes with a famous line from another well-loved J.R.R. Tolkien song: “Not all who wander are lost.”

I’ve seen this phrase on camp mugs, water bottle stickers, and even a spare tire cover on a Jeep Wrangler. It’s been widely adopted as something of a motto for all those who love taking to trails. Emblazoned on woodcuts, watercolors, and leather stamps, Etsy artists have given the phrase every imaginable home.

But why? It’s delightfully improbable when you think of it. An Oxford don — who was a daily communicant — specializing in philology has penned something of an anthem for today’s would-be bohemian itinerants. The line, which was taken from the poem “The Riddle of Strider” in the fantasy epic “The Lord of the Rings,” is now a ubiquitous slogan for seekers of all sorts.

And that’s the rub. The phrase doesn’t mean what many people think it means. Those who adopt the motto probably think that the line harkens to mountain climbing, backpacking, and similar impulses to cast off the predictability and responsibility of life. Wanderers, in this romantic view, seek spontaneity and abandon.

So was Tolkien a wanderer? Like his friend C.S. Lewis, he was known for loving long walks. However, Lewis once described Tolkien saying: “He’s a great man, but not our sort of walker. He doesn’t seem able to talk and walk at the same time. He dawdles and then stops completely when he has something interesting to say.” By the recollection of his friends and his own penchant for a slow pace, Tolkien seems to be more like his beloved Ent, Treebeard, than any of his other characters.

Walking features prominently in the Catholic tradition. St. Dominic de Guzman, founder of the Order of Preachers (the Dominicans), walked from town to town on his preaching mission. From 1218-19 alone, he walked more than 3,380 miles! Today, thousands of pilgrims walk the great Spanish pilgrimage to Santiago de Compostela, popularly called the Camino.

But every pilgrimage has a destination. And even Tolkien’s longest leisurely strolls led him back home. The full final verses of the poem from which the famous wandering line has been extracted reveal this. The poem concludes thus: “All that is gold does not glitter; / Not all who wander are lost. / The old that is strong does not wither. / Deep roots are not reached by the frost.” Rather than being an anthem to aimless wandering, the poem concludes by praising roots — that is, the foundation, the beginning.

What’s more, for Christians, every journey is overseen by God and His Divine Providence. Nothing in life is beyond His marvelous order. Philosopher Peter Kreeft writes of Tolkien’s work, “The Lord of the Rings is chock-full of divine providences.” “In fact,” he continues, “if there is any one particular religious doctrine that is as large as a continent in ‘The Lord of the Rings,’ this is it.” The hundreds of uncontrived, natural, convincing providential events of the novel reveal one of Tolkien’s main philosophical commitments: divine providence orders all things for the good.

For Tolkien, there is no destiny or fate, only providence. And providence can’t be escaped, avoided, or thwarted. His greatest heroes are heroes precisely because they turn their hearts and lives in service to this greater journey, revealing something deeper, something greater at work.

The subject of the poem as it is originally included in “The Fellowship of the Ring” is the ranger Strider. He is later revealed to be Aragorn, the true king of Gondor. For Tolkien, Strider is “gold” but “does not glitter.” Tolkien reverses the proverb “All that glitters is not gold” to emphasize the often-hidden work of providence. When he accepts the mantle of his calling, Strider becomes seen for what he truly is. His once-frosty rejection of his roots melts, not having destroyed them.

Precisely because of his calling, Strider can be changed. And here is the last and most essential distinction for Tolkien: that of an adventure versus a quest. Adventures, says Gandalf to Frodo, are “there-and-back-again” affairs. “An escapist culture lives for adventures,” writes Ralph Wood. The problem is that protagonists aren’t changed by adventures. They return home the same, having simply passed time in another place. A quest, on the other hand, because it is a calling, molds the heart and transforms those who submit to its mission and purpose.

Reject adventures, then, in place of quests. Prefer providence to purposelessness. Be wanderers, but not lost.

Father Patrick Briscoe, OP, is Editor of Our Sunday Visitor.