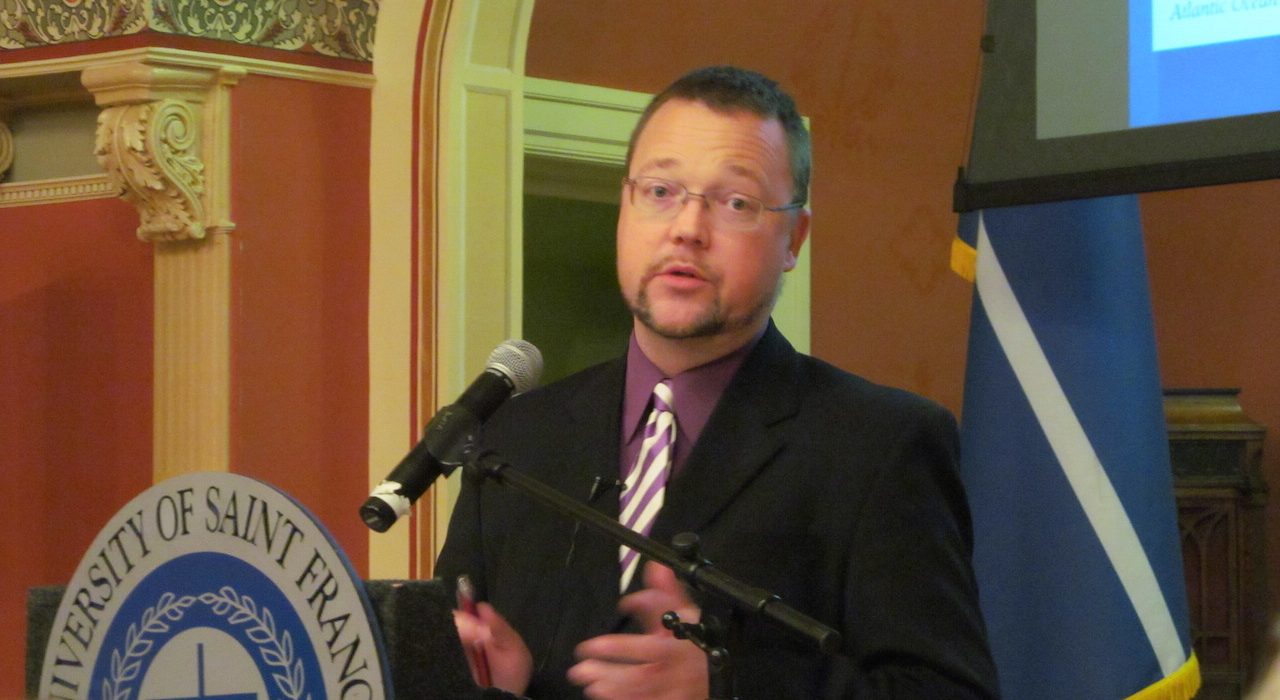 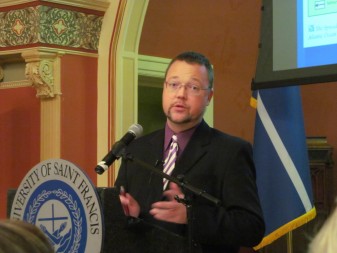 Dr. Adam DeVille presents “Eastern Christians and Islam” at the Brookside Mansion at the University of Saint Francis on Nov. 11.

FORT WAYNE — When it comes to Christians in the Middle East, there are “no happy endings.” This was the blunt assessment of Dr. Adam DeVille in a Nov. 11 talk on “Eastern Christians and Islam” at Brookside Mansion at the University of Saint Francis. This talk was part of a series open to the public offered by the Department of Philosophy and Theology. There were close to 50 people in attendance.

DeVille started his talk by telling his audience about the status of Eastern Christians in countries such as Iraq, Egypt and Syria today. “We have to appreciate the messiness of these issues. It’s not going to be neat and tidy. There are no happy endings with this topic, unfortunately,” DeVille said.

DeVille says that the Orthodox Church of the East and the Roman Catholic Church of the West agree on many theological issues such as the Trinity, the Eucharist and Mary the Mother of God. “The two churches are very close on many issues. The one thing that divides them is the question of the papacy, who gets to be the boss,” DeVille said.

DeVille said that Eastern Christians have dealt with Muslims from around the seventh century on. After Muhammad founded Islam in the early 600s in Arabia, Islam rapidly spread into Syria, Egypt, Armenia, Libya and Spain.

The Arab-Muslim overlords imposed “dhimmi” laws and restrictions that the Christians and Jews had to abide by, if they wanted to survive and practice their faiths. These restrictions included that the Christians and Jews lived in ghettos; church cupolas and Jewish synagogues could not be taller than Islamic mosques; Christian and Jewish celebrations had to be subdued with no public displays; Christians could not wear headdresses, to distinguish them from the Muslims wearing turbans; Christians and Jews had to step down from the sidewalk to the lower street or ditch in order to let Muslims pass by. The most hated part of the “dhimmi” status was paying a “jizya” poll tax to the Arab Muslim overlords.

While this sort of treatment strikes 21st century American Catholics as overtly unfair and trampling on religious freedom, DeVille said that it did allow Christians and Jews in these lands to survive and to continue practicing their faiths. The Christians and Jews were exempt from military service in the Islamic armies, as long as they continued to pay the “jizya” tax. The “dhimmi” laws and restrictions continued all the way to the 19th century. By 1918, most of the “dhimmi” laws had disappeared.

DeVille then moved to the present day to discuss the state of Eastern Christians. “The Christians in Iraq number half today what they numbered 12 years ago,” DeVille said. This was after the U.S. involvement in the two gulf wars. Iraqi Prime Minister Saddam Hussein was captured, tried and executed by the Iraqi Interim Government in 2006. The Shi’ite Party is in power today in Iraq.

DeVille turned to Egypt. In the wake of the Arab Spring, President Hosni Mubarak of Egypt was put on trial and imprisoned. After Mubarak was removed from office, the extremist Muslim Brotherhood came into power, which repressed the rights of women and Christians.

DeVille then considered Syria. “What a mess Syria is today,” DeVille said, with its civil war and the recent exodus of its people escaping to western Europe. DeVille considered these three rulers — Iraq’s Saddam Hussein, Egypt’s Hosni Mubarak and the Syrian President Bashar al-Assad. “These three rulers were, and are, all thugs. They all did violence against their own people. They were not the ones you wanted to invite home to meet your mother,” DeVille said. Yet these despots were able to maintain some control over the most extremist factions in their countries, and “they all protected the Christians in their regions,” DeVille said.

DeVille asked the hypothetical question: Should the West play a role in deposing Syria’s Bashar al-Assad, who is still in power? “Let’s look to Egypt and Iraq and see how those scenarios turned out. Who comes after Bashar al-Assad could be as bad, if not worse,” DeVille said. “When Western powers intervene in these regions, they often end up making things worse for the Christians there,” DeVille said.

Russian President Vladimir Putin has recently begun bombing raids in Syria against ISIS and rebel groups. Putin says he is ordering the bombings to protect Orthodox Christians in Syria, but DeVille believes that Putin senses an opportunity to assert Russian power in the region.

DeVille considered the sharp demographic decline of Christians in Iraq, Egypt and Syria. In the first centuries of Christianity, there were two cities that had vibrant and growing Christian populations — Antioch in or near Syria, and Alexandria in Egypt. DeVille delivered a striking and sobering thought: In these places where Christianity first took root and flourished in the early centuries, “we might see Christianity exterminated in these places in some of our lifetimes.”