WASHINGTON (CNS) — Five U.S. bishops, chairmen of U.S. Conference of Catholic Bishops committees or subcommittees, said May 17 they were “gravely disappointed” with the U.S. House of Representatives passage of the Equality Act. In an 236-173 vote, the House approved the measure, H.R. 5, which would add the new terms “sexual orientation” and “gender identity,” as well as “pregnancy … or a related medical condition,” to the definition of “sex” in federal civil rights laws, the bishops noted. It also would expand the types of entities covered under those laws and it exempt itself from the Religious Freedom Restoration Act of 1993. “Rather than offering meaningful protections for individuals, the Equality Act would impose sweeping new norms that negatively impact the unborn, health care, charitable services, schools, personal privacy, athletics, free speech, religious liberties and parental rights,” said the chairmen. Signing the statement were: Archbishop Joseph F. Naumann of Kansas City, Kansas City, chairman of the Committee on Pro-Life Activities; Bishop Frank J. Dewane of Venice, Florida, chairman of the USCCB Committee on Domestic Justice and Human Development; Archbishop Joseph E. Kurtz of Louisville, Kentucky, chairman of the USCCB Committee for Religious Liberty; Bishop Michael C. Barber of Oakland, California, chairman of the USCCB Committee on Catholic Education; and Bishop James D. Conley of Lincoln, Nebraska, chairman of the USCCB Subcommittee for the Promotion and Defense of Marriage.

DETROIT (CNS) — As part of a new pastoral note encouraging Catholics in the Archdiocese of Detroit to keep Sunday as a day of holiness, rest and family togetherness, Archbishop Allen H. Vigneron introduced a new policy requiring Catholic parishes and schools to stop scheduling athletic games and practices on Sundays. “In shifting away from the hustle of required sporting activities on Sunday, we will reclaim this holy day and create more time for families to choose activities that prioritize time spent with each other and our Lord,” Archbishop Vigneron wrote in “The Day of the Lord,” released May 15 as the fourth in a series of teaching notes supporting the themes of his 2017 pastoral letter, “Unleash the Gospel.” The policy, which goes into effect Aug. 1, is not meant to lessen the archdiocese’s commitment to youth athletics, said Father Stephen Pullis, director of the archdiocese’s Department of Evangelization, Catechesis and Schools. “At the synod, the question came up about how we can best live our life as a Church together, to bear witness to the world about what we believe,” Father Pullis told Detroit Catholic, online news source for the archdiocese. “What came through very clearly was that athletics are a wonderful part of the life of our local church, but they’ve also in some ways taken a disproportionate amount of time and attention for families.” He added, “We really needed to say that Sunday is about being for and with the Lord, for and with the family, and for and with those in need.”

HONG KONG (CNS) — The Vatican’s top diplomat told Chinese state-run media that Vatican-Beijing talks are focused on achieving concrete results for China’s Catholics while avoiding differences between the two “systems.” Cardinal Pietro Parolin, Vatican secretary of state, granted an exclusive interview to Global Times, an international tabloid run by the ruling Chinese Communist Party, reported ucanews.com. Global Times’ special correspondent Francesco Sisci and staff reporter Zhang Yu initially focused questions on the provisional agreement between the Vatican and Beijing regarding bishop appointments, signed Sept. 22. In the interview, Cardinal Parolin said the agreement is a starting point between both parties. “There is confidence that a new phase of greater cooperation can now be opened for the good of the Chinese Catholic community and the harmony of the whole society,” Cardinal Parolin said. “The channels of communication are working well. There are elements which demonstrate an increased trust between the two sides,” he said. “We are inaugurating a method which appears positive and which will still have to be developed over time, but which, for now, gives us hope that we can gradually arrive at concrete results.” The cardinal pointed out what was not being discussed with Chinese officials.

OUAGADOUGOU, Burkina Faso (CNS) — Catholic leaders in Burkina Faso appealed for unity and solidarity after two attacks on Catholics in two days left nine laypeople and a priest dead. “We have been working together for years — Muslims, Protestants, Catholics and followers of traditional religions, always walking hand in hand,” said Archbishop Seraphin Rouamba of Koupela. “In view of this, it isn’t necessary for such tragic acts to divide us.” The archbishop was preaching at the May 13 funeral of Father Simeon Yampa, a diocesan representative for interreligious dialogue, who was shot dead with five parishioners when Islamists attacked their church at Dablo during Mass May 12. Bishop Theophile Nare of Kaya described the murdered Catholics as “martyrs for the faith” and said the “despairing community” had been comforted by a May 13 message of sympathy from Pope Francis. The bishop said those responsible for “barbaric acts at the moment of consecration” were “attacking God himself,” who would ultimately triumph if Catholics showed “courage and faith. We must continue to pray, since what is happening today isn’t just a war against Christians, but a declaration of war on Jesus Christ,” he said.

‘Every abuse case one too many,’  but confession bill no solution

LOS ANGELES (CNS) — Saying that “confession is sacred to every priest and every Catholic,” Los Angeles Archbishop Jose H. Gomez is calling on Catholics to tell their state senators to vote “no” on a bill that “would order priests to disclose information they might hear in confession concerning the sexual abuse of minors.” The measure, known as S.B. 360, “is a mortal threat to the religious freedom of every Catholic,” he said in a column published May 15 in the Angelus, the archdiocesan news outlet. “Catholics believe that in the confessional, we can tell God everything that is on our heart and seek his healing mercy,” Archbishop Gomez said. “The priest is only an instrument; he stands in the ‘person of Christ.’ We confess our sins — not to a man but to God. “The privacy of that intimate conversation — our ability to speak with total honesty from our lips to God’s ear — is absolutely vital to our relationship with God.” In California, priests, along with teachers, social workers, doctors and other professionals, are “mandated reporters.” That means they are required by law to report any case of suspected abuse to authorities. Currently, there is an exemption in the law for any clergy member “who acquires knowledge or a reasonable suspicion of child abuse or neglect during a penitential communication.”

Militant posts video threat, saying he is in Canada to kill Asia Bibi

MANCHESTER, England (CNS) — An Islamic militant has posted a video on the internet boasting that he has arrived in Canada to kill Asia Bibi. The death threat comes a week after Bibi, a Catholic mother of five, was permitted to leave Pakistan for Canada to join her family at a secret address. She had been convicted of blasphemy and spent nearly 10 years on death row until she was cleared by the Pakistan Supreme Court in October, sparking anger among hardline Islamic radicals. In the video, the would-be assassin sings an Islamic chant honoring Muhammad, the founder of Islam, and professes that he is a beloved believer of Islam who will slay “the blasphemer Asia Bibi.” The man tells the “enemies of Islam and the Jew government that set Asia Bibi free” that he will kill her, according to a May 14 statement sent to Catholic News Service by the British Pakistani Christian Association. The association also said a number of churches in Pakistan have received threats from militants following Bibi’s release May 8.

TROSLY-BREUIL, France (CNS) — Gathered in a makeshift chapel around a simple pine casket, members of L’Arche communities and Faith and Light groups from around the world mourned the passing of Jean Vanier and celebrated his life, his wisdom, his holiness and humanity. In a message read at Vanier’s funeral May 16, Pope Francis prayed that the L’Arche communities around the world would “continue to be places of celebration and forgiveness, compassion and joy, demonstrating that everyone, no matter his or her disability, is loved by God and called to participate in a world of brotherhood, justice and peace.” Vanier died May 7 at the age of 90. During the offertory procession, a little Noah’s ark was set on the casket, honoring the name Vanier chose in 1964 when he formed a home with two men with intellectual disabilities, launching a movement that would grow to 154 communities in 38 countries. A large bowl of oranges — and orange peels — also was carried forward. Vanier was known to toss peels to or at community members at the end of a meal. Although subdued in the context of a Mass, peels from the bowl were tossed into the congregation, eliciting laughter and applause. 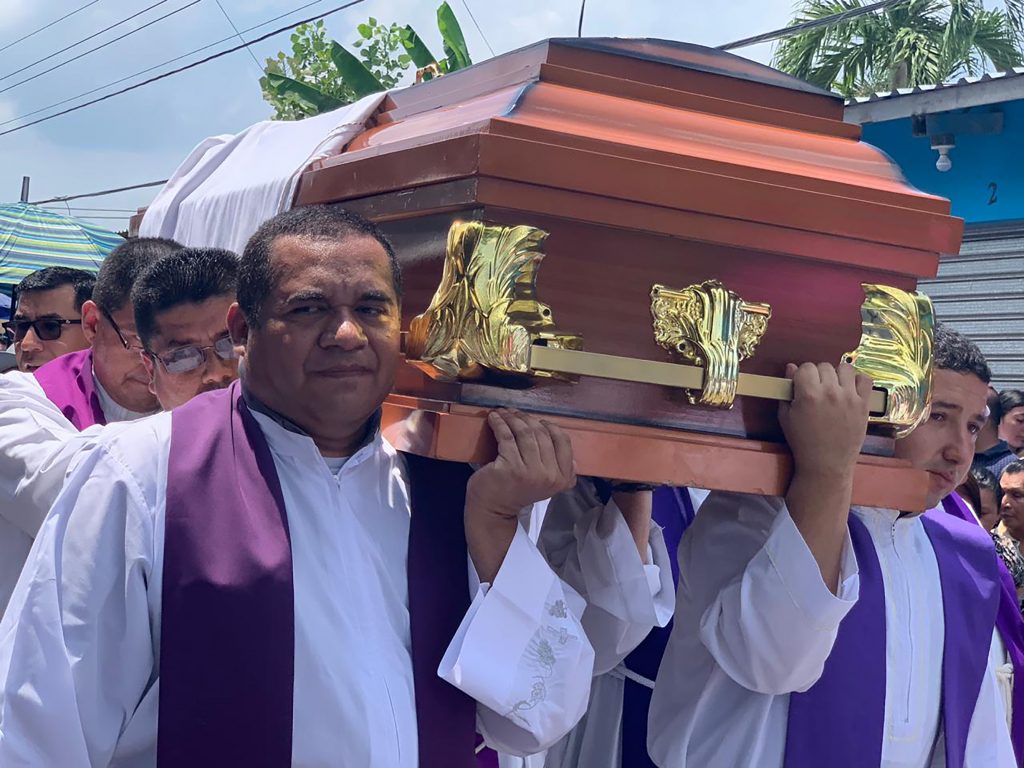 Priests carry the casket of Father Cecilio Perez Cruz during a May 20, 2019, funeral for the Salvadoran priest in Sonzacate, El Salvador. Parishioners found Father Perez dead in his residence in Juayua early May 18 with a note nearby that said he had not paid “rent,” a euphemism for extortion money. Preliminary Salvadoran police reports presume he was killed by gangs. (CNS photo/courtesy of Father Edwin Banos)