WASHINGTON (CNS) — A Catholic priest helping feed and shelter migrants in Central America has filed a complaint with Guatemalan authorities after he and his staff received death threats for providing humanitarian aid for the latest mass of migrants headed toward the United States. Father Mauro Verzeletti told Catholic News Service Jan. 23 via WhatsApp audio that he’s under 24-hour protection issued by Guatemalan authorities after receiving threats in mid-January. Father Verzeletti has been a vociferous critic of U.S. immigration policy involving Central America, including with Guatemala’s former president Jimmy Morales, who struck a deal with U.S. President Donald Trump to designate Guatemala a “safe third country,” meaning that migrants who pass through Guatemala headed north must first seek asylum there instead of heading to the U.S. It is a deal that newly minted Guatemalan President Alejandro Giammattei, who took office Jan. 14, opposes. Guatemala has one of the highest murder rates in Central America and is considered one of the most dangerous countries not at war in the world. Its citizens are fleeing north en masse with others from the neighboring nations of El Salvador and Honduras because of a combination of violent conditions, lack of economic opportunity, the effects of climate change and other factors.

WASHINGTON (CNS) — Catalina Galinanes, this year’s student speaker at the March for Life rally on the National Mall, has been to almost as many marches as Jeanne Mancini, president of the March for Life Education and Defense Fund. The Jan. 24 march was Galinanes’ seventh, Mancini’s eighth. “It’s so inspiring and so powerful to go with family and friends,” said the junior at Oakcrest School in Vienna, Virginia. She’s president of the school’s Respect Life Club. Forty students from the school were chosen to carry the parade-front banner for the entire duration of the march down Constitution Avenue to the Supreme Court. It’s in keeping with this year’s theme, “Pro-Life Is Pro-Woman,” linking the pro-life cause to the women’s suffrage leaders who brought about the 19th Amendment, enabling women to vote for the first time. “And so I thought it was appropriate that we have young women at the front of the march,” said Mancini in an interview with Catholic News Service ahead of the event.

VATICAN CITY — Pope Francis recognized the martyrdom of six religious priests and brothers and seven laypeople who were killed in the 20th century “in hatred of the faith,” clearing the way for their beatification. The pope approved the decrees during an audience Jan. 23 with Cardinal Angelo Becciu, prefect of the Congregation for Saints’ Causes. Among the soon-to-be blesseds are three Spanish priests of the Missionaries of the Sacred Heart of Jesus and seven laymen who were killed in Guatemala between 1980 and 1991. Sacred Heart Missionary Fathers Jose Maria Gran Cirera, Juan Alonso Fernandez and Faustino Villanueva were all serving in different parts of the Guatemalan department of Quiche, where almost 90% of the population is indigenous Maya. The guerrilla movement was very strong in Quiche, making it a scene of severe repression and horrific violence during Guatemala’s 36-year civil war. Priests and religious were often targeted by government forces as they were often accused of supporting or carrying out subversive activities. More than 200,000 people, mostly indigenous Maya, were killed or disappeared during the conflict, which ran from 1960 to 1996.

PHILADELPHIA (CNS) — Proclaiming his successor as “exactly the man our church needs,” Archbishop Charles J. Chaput introduced Bishop Nelson J. Perez, whom Pope Francis named as the next archbishop of Philadelphia, at a Jan. 23 news conference in Philadelphia. He will be installed as archbishop Feb. 18 at 2 p.m. in the Cathedral Basilica of SS. Peter and Paul. The pope had announced the appointment while accepting the resignation of Archbishop Chaput, who last September turned 75, the age at which canon law requires that bishops turn in their resignation to the pope. Anticipation for his successor had been building intensely in the archdiocese since that time, and judging by the applause in the room filled with more than 100 archdiocesan staff, it was a warm welcome home for Archbishop Perez, 58, currently the bishop of the Diocese of Cleveland. He described his appointment as a “surreal moment” for a former priest of the archdiocese to be named its new shepherd. Archbishop Perez is the first archbishop of Philadelphia of Hispanic heritage; his parents emigrated from Cuba and he was born in Miami in 1961. He also is the first native son to be archbishop of Philadelphia since Archbishop (later Cardinal) Dennis Dougherty in the early 20th century. And at 58, he is the youngest archbishop since Cardinal John Krol arrived in Philadelphia in 1961 at age 50.

Pope, Pence meet at the Vatican

VATICAN CITY (CNS) — After Pope Francis and U.S. Vice President Mike Pence met privately for nearly an hour at the Vatican, Pence told the pope that his Roman Catholic mother will be pleased with the visit. “Thank you, Your Holiness. You have made me a hero,” said Pence, who was raised Catholic but became an evangelical Christian. The vice president, along with his wife Karen and daughter-in-law Sarah, arrived 10 minutes early for the meeting with the pope Jan. 24. They were welcomed by Msgr. Leonardo Sapienza, regent of the papal household. As the pope and Pence sat down in the papal library of the Apostolic Palace, the vice president relayed greetings from U.S. President Donald Trump, who met with the pope in 2017. “I wanted to extend the warmest greeting on behalf of President Donald Trump who so enjoyed his visit here,” Pence told the pope before reporters were ushered from the room. After speaking with Pence for 59 minutes, with interpreters present, the pope greeted those accompanying the vice president on his visit, including Callista Gingrich, U.S. ambassador to the Holy See; her husband, former Speaker of the House Newt Gingrich; and Lt. Gen. Keith Kellogg, Pence’s national security adviser.

WASHINGTON (CNS) — During oral arguments Jan. 22 about the constitutionality of excluding religious schools from a scholarship aid program, a divided Supreme Court seemed like it might lean toward finding a way to allow religious schools to participate. The hourlong argument focused on potential religious discrimination when the state of Montana excluded religious schools from its tax credit program, but it also questioned if the exclusion of religious schools was even an issue since the program was shut down by the state’s Supreme Court in 2018. “I am having trouble seeing where the harm in this case is,” said Justice Elena Kagan, adding: “There is no discrimination at this point going on” since the program ended. But focusing on how the program cut out religious schools before shutting down, Justice Samuel Alito questioned the state’s lawyer, Adam Unikowsky, saying: “It’s permissible to discriminate on the basis of religion. That’s what you’re saying.” The case, Espinoza v. Montana Department of Revenue, was brought before the court by three Montana mothers who have been sending their children to Stillwater Christian School in Kalispell with the help of a state scholarship program. The program, created in 2015, was meant to provide $3 million a year for tax credits for individuals and business taxpayers who donated up to $150 to the program. It was helping about 45 students and just months after it got started, the Montana Department of Revenue issued an administrative rule saying the tax credit donations could only go toward nonreligious, private schools — saying the use of tax credits for religious schools violated the state’s constitution. 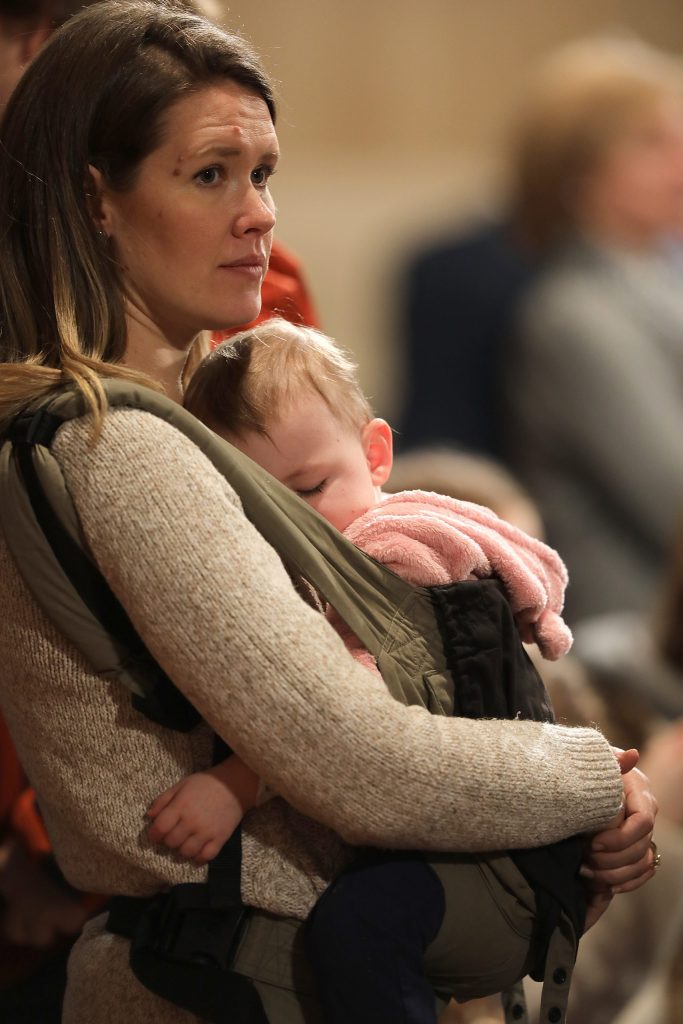 A woman holds a child during the opening Mass of the National Prayer Vigil for Life Jan. 23, 2020, at the Basilica of the National Shrine of the Immaculate Conception in Washington. (CNS photo/Bob Roller)