Forum explores alternatives to use of fetal tissue in medical research

WASHINGTON (CNS) — Alternatives to the use of fetal tissue from abortions are already plentiful, asserted one speaker at a Nov. 27 forum on the issue hosted by the Heritage Foundation think tank in Washington. “There are alternatives that exist that we can use,” said Tara Sander Lee, an associate scholar at the Charlotte Lozier Institute — the research arm of the Susan B. Anthony List — at the forum. What’s more, Lee added, “there are so many ethical alternatives.” The acquisition of fetal tissue has become a $100 million industry, according to one 2017 estimate. Lee, who has a doctorate in biochemistry, cited the case of Advanced Bioscience Resources, which she said has been referred to the federal Department of Justice for profiteering. Advanced Bioscience Resources, according to Lee, obtained 20-week-old fetus from an abortion clinic in June 2014 and paid $60. It then sold the fetus’ brain, eyes, liver, thymus and lungs to five different customers, charging $2,275 in all for the specimens, plus added charges for shipping, disease screening, cleaning and freezing. “Service fee, or profit?” Lee asked. “The human body is amazing and has a lot of tissues and organs that are available right now from the adult and pediatric population,” Lee said. “They can come from living individuals as well as post-mortem” rather than from aborted fetuses, she added.

WASHINGTON (CNS) — Once the California wildfires were contained — after burning for more than two weeks and ravaging the town of Paradise and nearby neighborhoods — those displaced by the raging fires began the process of resuming their lives. The Camp Fire, the nation’s deadliest fire in the past 100 years, killed 88 people and left nearly 200 unaccounted for. It also scattered local residents far and wide, with some living with family or friends nearby and others in makeshift shelters or tent cities. Schools were closed in Butte County from Nov. 8 when the fire started until after Thanksgiving when the fire was contained. Getting students back to school is just one of the monumental tasks ahead for the region with displaced families and closed schools. In Paradise, eight of nine public schools were destroyed as were two of six charter schools. There are no Catholic schools in Paradise, but Catholic schools in the Diocese of Sacramento have opened their doors at six elementary schools and a high school to all students displaced by the fires to attend these schools tuition free for the rest of the year.

Ethicist: Gene-editing human embryos ‘a train wreck of a thing to do’

WASHINGTON (CNS) — The revelation in late November that a Chinese researcher had edited genes in human embryos and then implanted them in a woman was “a train wreck of a thing to do,” said an ethicist at the National Catholic Bioethics Center in Philadelphia. “Normally clinical research proceeds in phases. First, you verify it works in animals, etc. Second, you verify that it’s safe. In small things you verify it’s effective,” said John Brehany, the center’s director of institutional relations. “He skipped all that stuff. He says, ‘I practiced in animals and human embryos.’ Even the Chinese officials are saying he violated their standards,” Brehany told Catholic News Service in a Nov. 30 telephone interview from Philadelphia. “He said he didn’t want to be first, he wanted to set an example, but he’s toying with human health. He said he practiced on human embryos, so that means he probably destroyed them. He practiced in the context of experimentation.” Brehany was referring to He (pronounced “hay”) Jiankui, who first revealed his efforts Nov. 26 during an international gene-editing conference in Hong Kong. He learned the gene-editing technique known as CRISPR while doing advanced research at Rice University in Texas. His partner from Rice may face sanctions from the U.S.-based National Institutes of Health depending on the depth of his involvement in the scheme. “CRISPR” stands for “clusters of regularly interspaced short palindromic repeats.” This is a specialized region of DNA having two distinct characteristics: the presence of nucleotide repeats and spacers.

WASHINGTON (CNS) — Ultranationalism is the chief reason behind the growing number of countries ranked worse than before on guaranteeing citizens their religious freedom, according to Thomas Heine-Geldern, executive president of Aid to the Church in Need. One example was India’s “Hinduistic nationalist approach,” Heine-Geldern said, “which leads to condemning everyone who is a non-Hindu a non-Indian. Then comes the discrimination.” Aid to the Church in Need is an international papal charity that provides pastoral and humanitarian aid to persecuted and oppressed Christians and supports various church projects in more than 140 countries. The organization’s report, “Religious Freedom in the World 2018” — one of the few non-U.S. sources for unbiased documenting of religious freedom issues — cited the case of 10 Muslims who have been murdered by radical Hindus who are known as “cow vigilantes.” Cows are considered sacred in Hinduism. The report was released Nov. 27.

MANCHESTER, England (CNS) — Catholic bishops have expressed hope that Pope Francis will canonize Blessed John Henry Newman in 2019 after Vatican medics said the inexplicable healing of a U.S. mother was a miracle attributable to his intercession. The cardinal was beatified in 2010 by Pope Benedict XVI in Birmingham, England, after the miraculous healing of Boston Deacon Jack Sullivan. Archbishop Bernard Longley of Birmingham said the English and Welsh bishops were informed during their “ad limina” visit to Rome in September that the second miracle needed for the canonization of Blessed Newman had been found. “I understand that the medical board responsible for assessing a second miracle has now delivered a positive assessment to the congregation,” he told Catholic News Service in a Nov. 29 email. The archbishop said members of the congregation will meet early next year “to consider the medical board’s assessment and to make its own recommendation” to Pope Francis, who will make the final decision and possibly set a date for the canonization ceremony.

WASHINGTON (CNS) — The human rights office for the Archdiocese of San Salvador is taking the country’s judicial system to task, urging the prompt prosecution of those responsible in the assassination of St. Oscar Arnulfo Romero, calling for an end to “creative” excuses for not doing so. A Nov. 28 statement from Tutela de Derechos Humanos del Arzobispado de San Salvador, the archdiocese’s office of human rights, said excuses and barriers have been used for more than 38 years (since St. Romero’s assassination) for “not carrying out justice,” not just in his killing but in the killing of thousands of Salvadorans, including many Catholics who were murdered, tortured and disappeared during the country’s 1980-92 conflict. On Oct. 23, days after the Catholic Church declared Salvadoran Archbishop Romero a saint, a judge in El Salvador issued a capture order for Alvaro Rafael Saravia, a former military captain suspected of killing the religious leader in 1980 as the archbishop celebrated Mass. But there’s frustration that even though the order was issued, nothing will happen to bring Saravia and others to justice, said Father Estefan Turcios Carpano, director of the archdiocese’s human rights office, in a Nov. 29 telephone interview with Catholic News Service. Saravia, who for years has been a suspect in the killing, remains at large and is believed to be in hiding. The letter from the human rights office said Saravia, as well as other government and guerilla agents — former right-wing military strongman Roberto D’Aubisson; Saravia’s chauffeur, Armando Garay; Mario Molina, a former president’s son suspected of hiring St. Romero’s hit men — have to be brought to justice for the killing. All were named in a U.N. Truth Commission report that investigated the archbishop’s assassination. 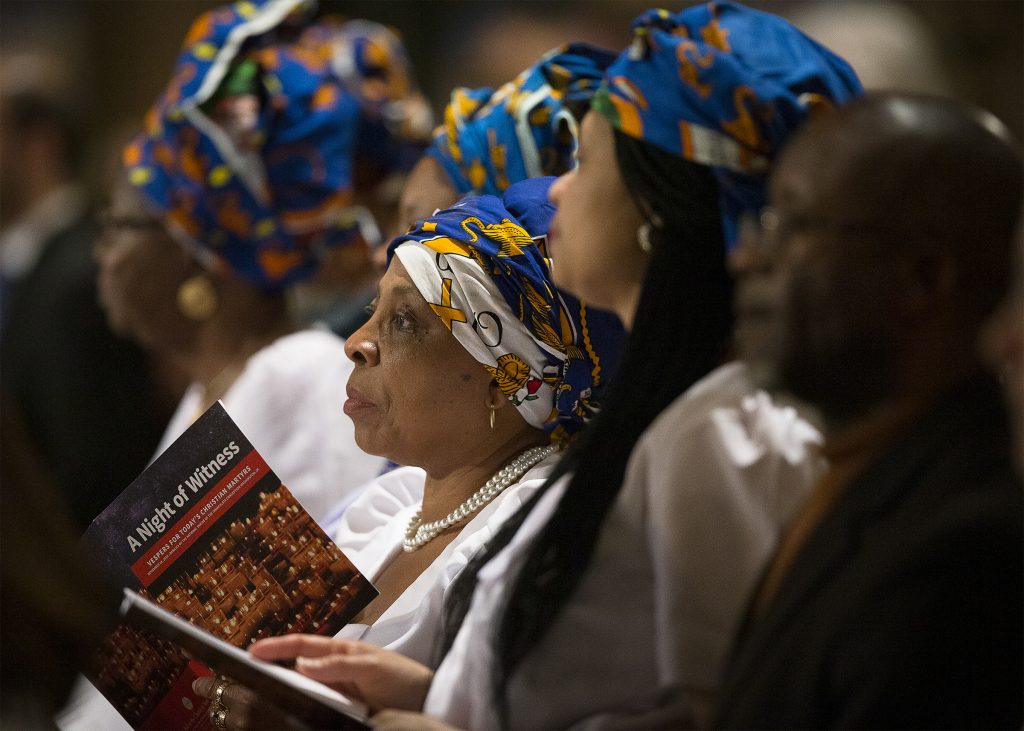 People attend a vespers service for persecuted Christians Nov. 28 in the the Crypt Church at the Basilica of the National Shrine of the Immaculate Conception in Washington. (CNS photo/Tyler Orsburn)