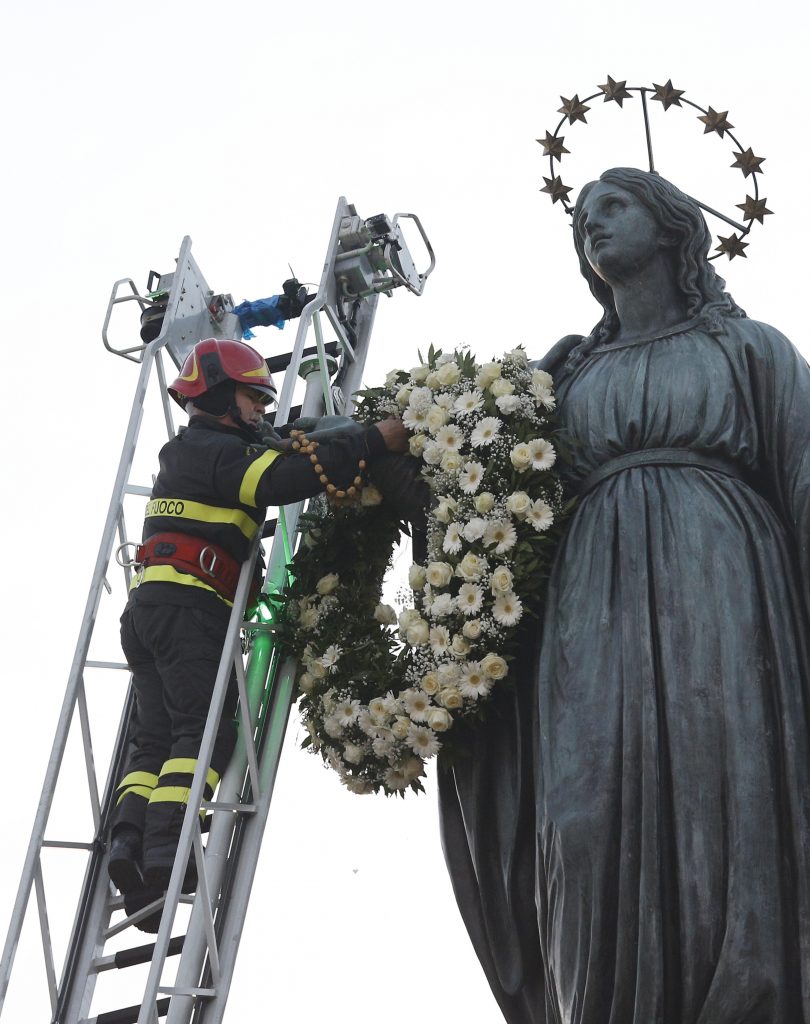 A firefighter places a wreath of flowers on a statue of Mary overlooking the Spanish Steps in Rome Dec. 8, the feast of the Immaculate Conception. Pope Francis was to honor Mary later in the day by attending a service at the statue. (CNS photo/Paul Haring)

MEXICO CITY (CNS) — Pope Francis picked a longtime ally to lead the world’s largest archdiocese, where many professing the Catholic faith have fallen away from the Church and senior clergy have failed to influence many changes in social policy. Cardinal Carlos Aguiar Retes of Tlalnepantla was named archbishop of Mexico City Dec. 7. He succeeds Cardinal Norberto Rivera Carrera, who submitted his resignation June 4 upon turning 75, as required by canon law. In 2007, Cardinal Aguiar collaborated with then-Cardinal Jorge Mario Bergoglio of Buenos Aires — who would become Pope Francis — in writing a document on evangelization in the Americas for the Latin American and Caribbean bishops. The document, which became known as the Aparecida document for the city in Brazil in which it was written, calls for Catholics to prioritize reaching people on the peripheries of society. It has become a guide of sorts for the current papacy. In a statement via Twitter, Cardinal Aguiar said he recognized God’s will and would accept the new position “with trust in the Holy Spirit to obey, and full of hope for this ecclesiastical responsibility in favor of God’s people.”

WASHINGTON (CNS) — The chairmen of the U.S. bishops’ committees on international policy and on migration urged President Donald Trump Dec. 5 to reconsider his decision to withdraw the United States from the U.N. process to develop a global compact on migration. “Participation in that process allows the U.S. to draw on our experience and influence the compact,” said Archbishop Timothy P. Broglio of the U.S. Archdiocese for the Military Services, who is chair of the U.S. Conference of Catholic Bishops’ Committee on International Justice and Peace. Catholic Relief Services and Jesuit Refugee Service were among other groups criticizing Trump’s decision, announced Dec. 2 by Secretary of State Rex Tillerson. The move came two days before the opening of an intergovernmental conference in Puerto Vallarta, Mexico, to adopt a Global Compact for Safe, Orderly and Regular Migration. In his statement, Bishop Joe S. Vasquez of Austin, Texas, who is chairman of the USCCB’s Committee on Migration, said that Catholic social teaching on migration “recognizes and respects the sovereignty of each nation, indeed each nation’s right and responsibility, to ultimately decide how it will regulate migration into its territory.”

LOS ANGELES (CNS) — The Archdiocese of Los Angeles has started a fund for victims of the wildfires that have raced through the archdiocese and were threatening to spread to locations in the nearby Orange and San Diego dioceses. “Friends, as the wildfires continue, the needs of our neighbors continue to increase,” said Archbishop Jose H. Gomez of Los Angeles on the archdiocesan webpage that hosts the fundraising campaign, https://tinyurl.com/yaa4qlu2. “In this season of giving, let us open our heart to our brothers and sisters in need,” he added. “Let us keep praying for an end to the fires and let us keep praying for the safety of our police, fire and emergency workers — and all those who are in harm’s way.” In a Dec. 8 statement from Washington, Cardinal Daniel N. DiNardo, president of the U.S. Conference of Catholic Bishops, asked prayers for all those in danger, “both those whose homes are in the fire’s path and those courageous first responders and firefighters who are putting their lives at risk.” The wildfires, which have stubbornly resisted most efforts to be reined in by firefighters, have hit Los Angeles, Ventura and Santa Barbara counties in the archdiocese.

NEW YORK (CNS) — Cardinal Timothy M. Dolan of New York said Catholics should learn from their “Jewish elder brothers and sisters” how best to advocate with elected leaders to alleviate the plight of persecuted Christians in the Middle East. “It took us a while to answer the alarm clock” on the issue, but Catholics have responded generously with aid, awareness and prayers, he told participants at a Dec. 5 conference on “Preserving Christian Communities in the Middle East and Curbing Anti-Semitism.” Cardinal Dolan and other speakers said indifference, secularism and a societal reluctance to call evil by its real name contribute to lack of large-scale outrage and political action to protect Christians and help them live safely in their homelands. “Indifference gave us the Holocaust and indifference gave us the genocide situation in the Middle East. Who will stand up for the Christians?” asked Ronald S. Lauder, president of the World Jewish Congress and former U.S. ambassador to Austria.

WASHINGTON (CNS) — The U.S. Supreme Court said Dec. 4 that President Donald Trump’s travel ban restricting entry into the United States by nationals from some countries can be fully implemented while legal challenges to the ban work their way through the lower courts. In a brief unsigned order, the high court stayed a preliminary injunction on implementation of the ban, granting the Trump administration’s request to allow its latest ban, released in late September, to go into effect. The order also urged the two appeals courts with cases before them to render “with appropriate dispatch” a decision on whether the ban is constitutional. Justices Ruth Bader Ginsburg and Sonia Sotomayor “would deny the application,” according to the order. The Supreme Court’s order means that the Trump administration can fully carry out the ban — which is now in its third iteration. It currently restricts travel to the United States from eight nations, six of them predominantly Muslim. Most citizens of Iran, Libya, Syria, Yemen, Somalia, Chad and North Korea will be barred from entering, along with some Venezuelan government officials and their immediate family. A friend-of-the-court brief filed on behalf of the U.S. Conference of Catholic Bishops in mid-September said the travel ban was “cruel and inhumane treatment” and that “denying refugee children life-saving entry to the United States based on an executive order clearly motivated by anti-religious bias, is both un-Catholic and un-American.” 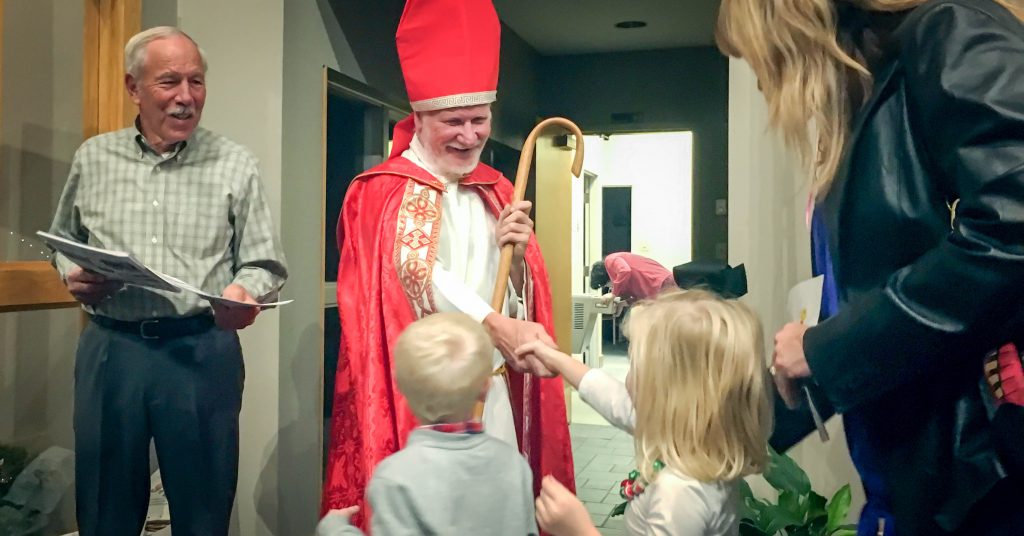 Young parishioners shake hands Dec. 2 with an actor portraying St. Nicholas, the namesake of their church. St. Nicholas Catholic Church in Santa Claus, Ind., hosted the visit from “St. Nick” ahead of the saint’s feast day, which is Dec. 6. (CNS photo/KatieRutter)