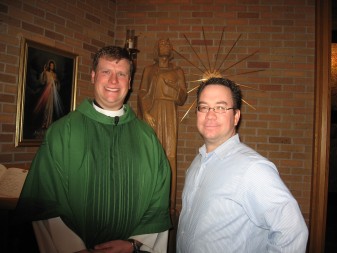 Father Jacob Runyon, left, pastor of St. Jude Parish, Fort Wayne, is the chaplain of the newly chartered St. Jude Parish Council. He is shown here with Darren Zink, council Grand Knight. The new council plans to introduce itself to the parish with a Lenten fish fry.

Commenting on his position as council chaplain, St. Jude pastor Father Jacob Runyon said, “When Father Michael J. McGivney founded the Knights of Columbus with a handful of parishioners, it was assistance to the family that he had in mind. Now, more than a century later that guiding purpose has made the Knights flourish not only by providing financial assistance to families when needed, but with daily spiritual direction through many planned activities for youth all the way to the elderly. As a pastor and chaplain of a parish council, I look forward to following the example of our founder, Father McGivney by bringing our K of C families closer to the Holy Family.”

Grand Knight Darren Zink has been a Knight for 15 years starting at Our Lady of Good Hope Parish and later at Father Brandon Council 451, Fort Wayne. He looks forward to developing the new council for future generations.

The Knights of Columbus, formed 133 years ago, is a family, fraternal organization for Catholic men supporting and promoting activities for Church, family, youth, vocations and pro-life. More than 1.8 million members are found in more than 14,000 councils in the United States, Canada, the Philippines, Mexico, Poland and nine other countries and territories.