YANGON, Myanmar (CNS) – Cardinal Charles Bo of Yangon has sought the intercession of Mary for protection, healing and mercy for conflict-torn Myanmar, which has been in turmoil since the February 2021 military coup.

“Our Lady becomes the mother of all people, of all races and all religions. The whole (of) Myanmar came here for healing and celebrating,” Cardinal Bo said in a homily at the National Marian Shrine of Nyaunglebin on Feb. 11, the feast of Our Lady of Lourdes. “But this year we have come here as a wounded nation, a wounded people.”

Ucanews.com reported that since 1902, thousands of Catholics, Hindus and Buddhists from across the Southeast Asian country have participated yearly in the Lourdes feast at the shrine, but this year the novena and celebrations were held online due to the coronavirus and political instability. 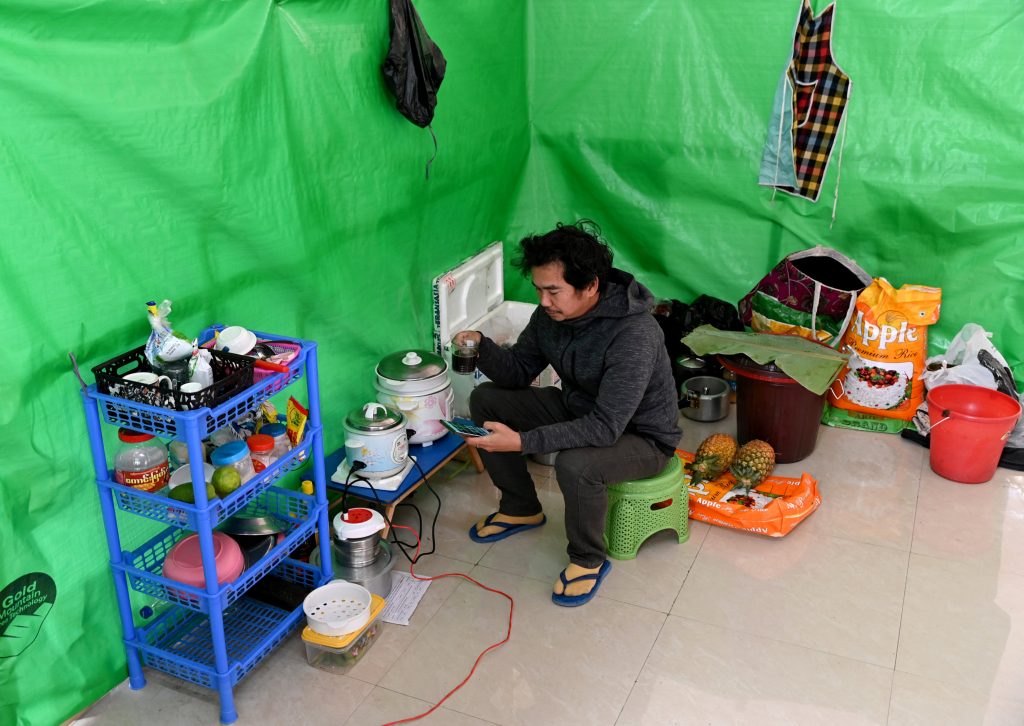 Aung Nay Myo, a protest organizer and satirical writer from Myanmar, drinks tea as he looks at a photo of his father on his phone inside a temporary shelter at an undisclosed location in a town in a country bordering Myanmar, in this Jan. 27, 2022, file photo. Cardinal Charles Bo of Yangon, Myanmar, appealed to Mary to protect his country, which has faced much instability since a military coup. (CNS photo/Reuters)

Cardinal Bo highlighted the five wounds inflicted on Myanmar: the COVID-19 pandemic, the military coup, civil wars, the collapse of the economy and the displacement of people.

“More than ever we need our Mother of Mercy in Myanmar today. Our pain is her pain,” he said. “As a mother, she was with her son at the most needed time. Not abandoning us, she stands with the people of Myanmar today. She is the mother most faithful and most merciful.”

The cardinal made his appeal amid protests and armed resistance across the country against the military junta, which has unleashed airstrikes, artillery shelling and burning of civilian homes, forcing thousands of people to flee and seek refuge in nearby jungles or churches. Ucanews.com reported churches and other community institutions are being targeted by junta forces in predominantly Christian Kayah and Chin states.

Catholic bishops in Myanmar have appealed for humanitarian assistance for the thousands of displaced people while seeking “the fellowship of the universal Church and donor community to seek support to all our Myanmar people without any discrimination.”

The number of internally displaced persons has crossed the 800,000 mark since the coup, according to the U.N. High Commissioner for Refugees. More than 1,500 people have been killed while at least 12,000 have been detained by the junta in the 12 months following the coup.