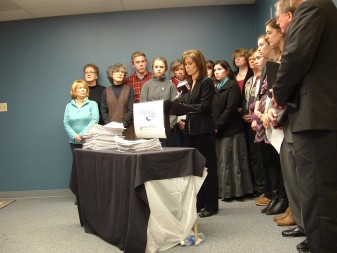 Jeanette Burdell, program director of the St. Joseph County Right To Life, stands at the podium surrounded by University of Notre Dame Right to Life officers, Marian High School students and former students and pro-life supporters who were present for a press conference Dec. 19 announcing consumer complaints attached to Terminated Pregnancy Reports. The reports were reviewed by Right-to-Life members and highlighted for errors and omissions. There are 1,202 complaints citing 1,590 total errors and omissions between the 1,202 Terminated Pregnancy Reports found containing mistakes.

SOUTH BEND — Representatives from Indiana Right to Life, St. Joseph County Right to Life and the South Bend pro-life community announced at a press conference Dec. 19 more than 1,200 consumer complaints against South Bend Women’s Pavillion doctor, Dr. Ulrich Klopfer. Each complaint is the result of errors or omissions found on terminated pregnancy reports provided by the Indiana State Department of Health for abortions performed by Klopfer between July 2011 and June 2013.

The complainants include 16 women from St. Joseph County. In their complaints, they are requesting the immediate suspension of Klopfer’s medical license, pending a full investigation. Local Right to Life leaders are requesting a meeting of the county prosecutor as he has the authority to bring criminal charges against Klopfer. Indiana law states that failure to complete and submit the report on time carries a Class B misdemeanor charge.

“The sheer numbers of errors and omissions on these terminated pregnancy reports cannot be ignored,” said Tom Gill, president of St. Joseph County Right to Life. “A few errors and omissions could be understandable, but 1,590 is unacceptable. If Dr. Ulrich Klopfer can’t get his paperwork in order, how can he run a business that profits from invasive surgical procedures on women?”

“Today’s complaints show that Dr. Klopfer is demonstrating sloppy work at all three of his abortion facilities,” said Mike Fichter, president and CEO of Indiana Right to Life. “We thought a combined 1,100 errors and omissions from Lake and Allen Counties was alarming, but here the total number is an astounding 1,590. Terminated pregnancy reports are important for health and safety accountability measures at these facilities. Dr. Klopfer’s pattern of sloppy reports shows he doesn’t fully value the health and safety of his patients.”

“Proper reports are important to our community and to the health and safety of women seeking abortions,” said Jeanette Burdell, program director of St. Joseph County Right to Life. “This isn’t the first time the community has learned that Dr. Klopfer has failed to meet state-required reporting requirements. Dr. Klopfer has also improperly reported abortions on 13-year-olds as required by law to protect young girls from child abuse. We call on the state and local authorities to take action immediately.”

On Dec. 12, the Allen County Right to Life learned that Klopfer was losing his relationship with his legally-required physician designee, or “back-up” doctor. Dr. Geoffrey Cly, OB/GYN, notified Klopfer in a letter dated Dec. 12 that he was terminating his relationship as physician designee effective Dec. 31, 2013, because of Klopfer’s handling of 13-year-old abortions.

The Allen County Patient Safety Ordinance (Title 10, Article 10) requires doctors practicing but not residing in the county to have a relationship with a local doctor who can legally practice in Allen County. Additionally, state law requires abortion doctors to have local admitting privileges or have entered into an agreement with a physician who has admitting privileges at a hospital in the county or contiguous county concerning the management of possible complications of the services provided.

Cly, a pro-life physician who is board certified in obstetrics and gynecology, became Klopfer’s physician designee in September 2010 because of his desire to protect the health and safety of any woman who may have a complication due to an abortion. As Klopfer’s physician designee, Cly would have cared for any of Klopfer’s patients with medical complications or situations arising after an abortion if Klopfer was not available. Klopfer resides in Crete, Ill., and leaves Fort Wayne immediately after he performs abortions.

The Fort Wayne News Sentinel reported Dec. 27, that Klopfer will take a “hiatus” from performing abortions in Fort Wayne but plans to resume when a replacement for Dr. Cly is named.