Why would a group of teens give up a week of their summer vacation to do service work in the heat, miles from home, for a cause from which they will never benefit?

Apparently for enjoyment, as members of the youth group from St. Jude Parish in Fort Wayne discovered.

“I don’t know what one thing it is, but the mission trip is always the most fun week of the year,” Jon Schroeder remarked. A recent graduate of Bishop Dwenger High School, this year was his fifth and last trip with the youth group.

The parish’s yearly mission trips are more than a week of fun with friends; they are a journey of discovery. Each year, Vickie Lortie, youth minister, arranges for the group to either remain in Fort Wayne or spend a week in South Bend serving the needs of local charitable organizations. This year, Father Robert Garrow at St. Stanislaus Kostka Parish, New Carlisle, offered the parish’s facilities as a headquarters for the youth group. 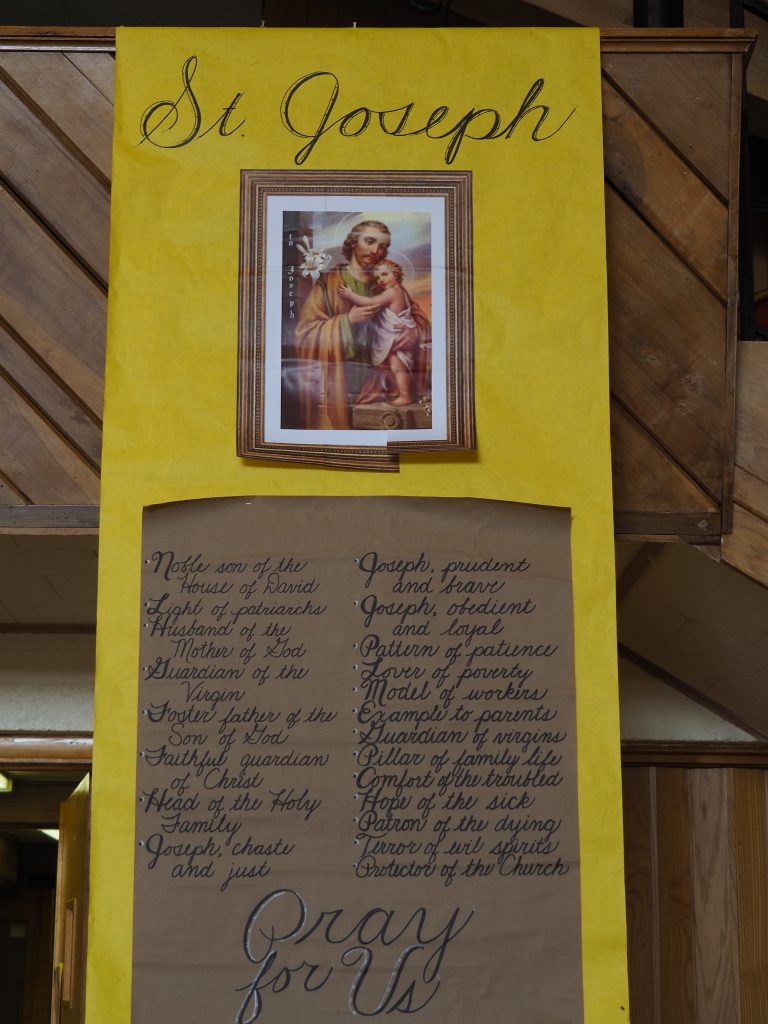 The theme of the St. Jude Parish mission trip this year was St. Joseph. Participants prayed the Litany of St. Joseph each day and posted quotes about him to maintain focus on the saint.

Lortie and Father Garrow had previously worked together when he was assigned to St. Jude in the early days of his priesthood, and again when she brought her team to his former parish of St. Anthony de Padua in South Bend to paint some classrooms in the school. He knew the teens were hard workers and had hearts for service, and since his parish had space for them to sleep and work for them to do, the situation was perfect.

Father Garrow has come to love the service aspect and working with the teens, he said. He believes that Lortie has a special talent for challenging the youths to help each other and to grow in their faith through service.

Lortie emphasized that the yearly event is not simply a mission trip, but rather a pilgrimage. The theme this year was St. Joseph the Worker, and the walls of the facilities at St. Stanislaus were plastered with his titles and quotes as reminders of his holiness and virtue. Each person who took part in the mission trip, including chaperones, were given a prayer partner for the week, and the Litany of St. Joseph was given a place of prominence. The group prayed it together daily.

Inspired by the Way of St. Joseph walking pilgrimage that took place on May 1, the group had planned to walk the same path as the pilgrimage — from St. Joseph Parish, Mishawaka, to St. Joseph Parish, South Bend — but inclement weather prevented that. Instead, they “church-hopped” in the area, visiting three parishes: St. Joseph and St. Monica in Mishawaka and St. Pius X in Granger. Two of the pastors, Father Christopher Lapp and Msgr. William Schooler, took time to speak to the youths during their visits.

Several of the students later commented on the beauty of the churches they had discovered in the area, including St. Adalbert, South Bend, where some of them had helped lay rubber mulch on the school’s playground.

While at St. Adalbert, one of the groups learned how the historic church was built by the hands of Polish immigrants who came home from a full day of work only to spend time constructing their neighborhood church. Hearing this history compelled them to consider how they spend their own spare time and where their priorities lay. They also got to see a vocation of a different sort, as the parish’s new maintenance director, Gregory DeLee, shared his love of the Gothic church and his steadfast dedication to its preservation. 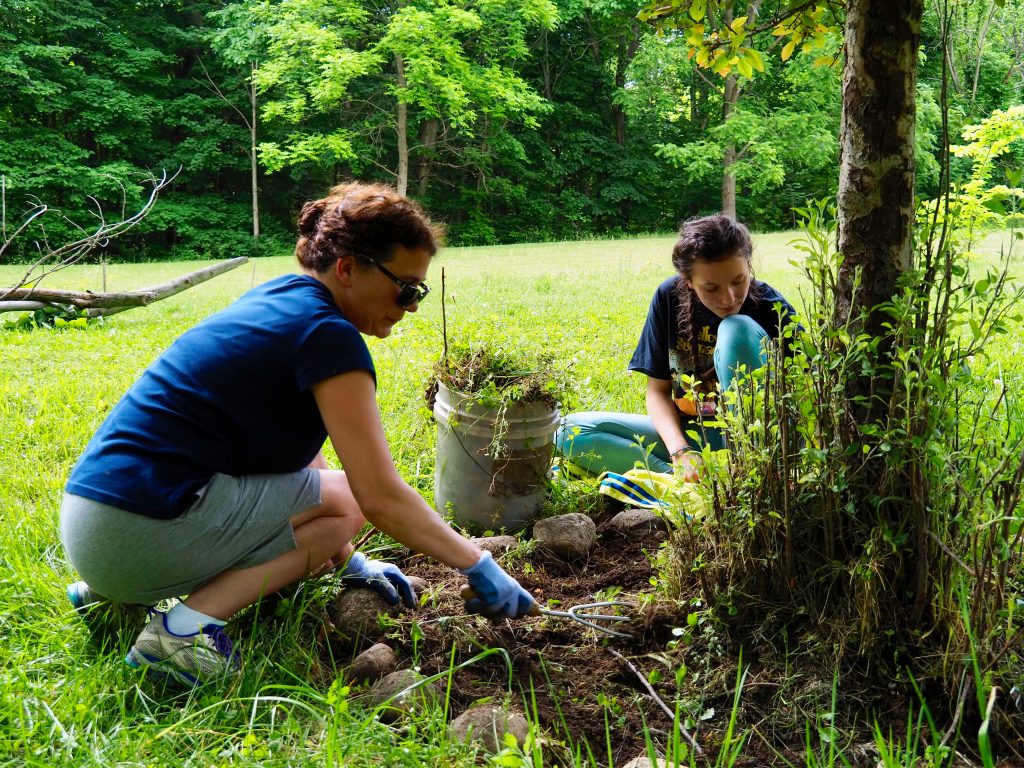 Chaperone Karen Ewing and St. Jude Fort Wayne youth group member Abby House clear weeds on the grounds of the Share Foundation in LaPorte, a residential living center for adults with special needs. This effort was part of the St. Jude youth group’s recent mission trip to the South Bend area, along with multiple other locations. — Photos by Jennifer Barton

Participants experienced the unique character of several parishes in one week. Father Garrow was especially pleased by the response from St. Stanislaus, citing the “amazing hospitality” received from parishioners. Donations of food came in from many within the parish community.

Not only has learning about other parishes impacted the teens, but they have left their mark on the places and the people that they served.

“Our parish needs to see this — they need to see the students’ life and vitality,” Father Garrow said. “The impact of the kids for our parish is going to be really beneficial.” He remarked that the teens are “on fire,” and hopes that their example inspires others to do the same.

The adult chaperones declared how impressed they were by the teens’ dedication as they labored for hours in oppressive heat or performed what could be considered monotonous tasks for much of the day. Just as some of the youths had never attended a mission trip, while others had gone multiple times, the adult volunteers ran the same gamut. Even a 77-year-old St. Jude parishioner took part for the first time.

As a seasoned veteran of mission trips, Schroeder compared the spiritual aspects of them to retreats.

“Retreats are a lot more between you and God. With mission trips, it’s a lot more community; you’re just really getting close to the community around you. You’re all here to help each other out,” he reflected. 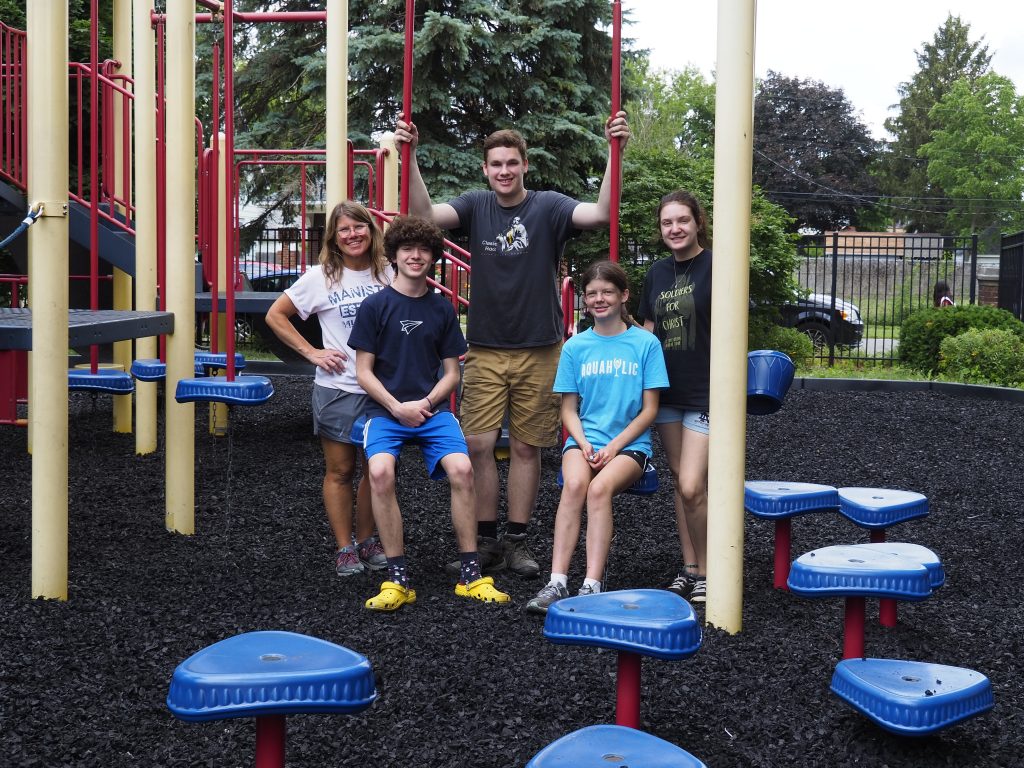 One of the work groups from St. Jude youth helped lay mulch on the playground at St. Adalbert School in South Bend.

First-time participant Jake Patrick was initially less than thrilled when his parents signed him up for the mission trip, he said. “I was not too excited to leave my house for a week and do work. But on Monday, my opinion completely changed. It doesn’t feel like we’re doing work. We’re helping others and it feels great.” He and another newcomer said that they would likely volunteer again next year.

Abby House joined the trip for the second year in a row, for similar reasons. “My friend was doing it, and I really liked the feeling last year of just helping out the community. It was really fulfilling.”

She appreciated the balance of faith and service.

“We go to Mass in the mornings and that’s a really nice start to the day, and we’re doing some novenas to St. Joseph, which is really cool because it’s the Year of St. Joseph.”

Seminarian Patrick Ernst joined the group for part of their experience and shared his vocation story during a lunch break from clearing leaves on the grounds of St. John the Baptist Parish, South Bend, one of the locations suggested by Father Garrow.

After the isolation of the past year, Lortie knew that the youths needed person-to-person interactions with fellow students and members of the community, which proved to be revitalizing. Following service projects they performed at the Share Foundation, a 185-acre Catholic residential community for “other-abled” adults in LaPorte, the group spent an evening having dinner, games and a bonfire with the residents. Evenings also included praise and worship with priests like Father Sunday Akuh, who represented his Nigerian culture in song.

In total, Lortie reported that 33 St. Jude youth group members participated in the week of service, serving about 13 different agencies in the South Bend area during the five days.