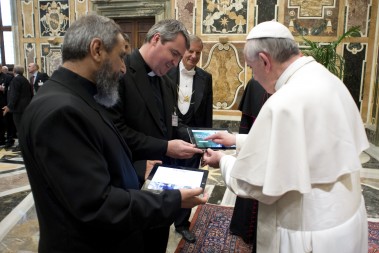 Pope Francis launches the smartphone app Missio during an audience with national directors of pontifical mission societies May 17 at the Vatican. Holding the iPad for the pope is Oblate Father Andrew Small, national director of the Pontifical Mission Societies in the United States. The free app features homilies from Pope Francis as well as Catholic news from the Vatican’s missionary news agency and other providers.

SOUTH BEND — With the touch of a button May 17, Pope Francis joined forces with a small mobile app company from the Diocese of Fort Wayne-South Bend to make history and help spread the Gospel even further in the digital age.

After a few anxious moments, the first-ever papal launch of a mobile app took place as Pope Francis opened Missio, a free app that brings the latest Catholic news and video from around the world to iPhone, iPad and Android mobile devices. Scheduled to happen between 4 and 6 a.m. EST, the two-hour window came and went. Then at 7:09 a.m., the screen flickered to life.

“We were just relieved that everything worked!” grinned Chip Leinen, one of the founders of Little i Apps, all of whom were anticipating Friday’s launch. “We had to build this very, very quickly and we were nervous about whether everything would be working, and we’re just thankful that it did!”

Leinen, a parishioner at Christ the King in South Bend, says the ancient architecture of the Vatican presented some technological concerns, but the app, first blessed by Pope Francis, was launched without a hitch.

“Missio,” which is Latin for “mission,” was developed at the request of and in conjunction with the Pontifical Mission Societies, based in New York City. National Director Father Andrew Small approached Little i Apps a few months ago with the idea. Development sped up significantly two weeks ago when Father Small announced the pope’s interest in launching the app himself.

“We’ve been putting in 14-hour days for the last week-and-a-half,” admits Leinen, who makes up the Little i Apps team along with his brother, Patrick Leinen and friend Ryan Kreager, both parishioners of St. Pius X in Granger.

Missio provides daily news reports and videos from the Vatican’s news service — Vatican.va —and international news agency of the Pontifical Mission Societies (FIDES) along with streaming video from Catholic News Service and Vatican News Agency. Users will have the latest global Catholic news at their fingertips along with the ability to share articles and videos on other social media such as Facebook and Twitter.

“The most rewarding part of our work is seeing our clients flourish,” says Kreager. “The Pontifical Mission Societies are a great example. These guys are the real deal — they run thousands of clinics, orphanages and schools all over the world. They are living out the call to preach the Gospel, and they do it through their actions. Even this app is part of their mission. Computers are expensive in developing nations, but smartphones are becoming more common; the app is mindful of this need. The most rewarding part of what we do is getting to be a small part of the great work our clients do.”

The unveiling of Missio came on the heels of World Communications Day as the Catholic Church reflects on the former pontiff, Pope Emeritus Benedict XVI’s invitation to Catholics to make better use of social media in sharing the Gospel. The Pope Emeritus, who opened the first papal Twitter account, challenged the Church to think about social networking sites as “new spaces for evangelization.”

Pope Francis offers Catholics a new opportunity with the launch of Missio to reflect on ways their mobile devices can also be used as spaces for evangelization.

“I think the best feature of this app is the video,” says Kreager. “Catholic News Service and Vatican News videos produce a huge amount of high-quality videos about the Catholic Church all over the world, and especially related to the pope. Unfortunately, the videos were embedded in their mobile-unfriendly websites or buried in YouTube RSS feeds. The Missio app brings some amazing video right to your pocket.”

Little i Apps is no stranger to drawing connections between digital and sacred spaces. In 2011, they developed and launched, Confession: A Roman Catholic App, which triggered an international response to how individuals could properly make use of digital tools to aid their spiritual lives.

“We are excited and honored to have been selected to develop the first app launched by a pope,” adds Patrick Leinen. “Bishop (Kevin C.) Rhoades has always been supportive and kind to our work, and it’s nice to know the Vatican has taken something from this diocese and shared it with the world.”

A few more Catholic projects are in the works, including apps for the Knights of Columbus and Augustine Institute. Leinen says they will also work on some commercial projects for secular clients, then create more Catholic apps.