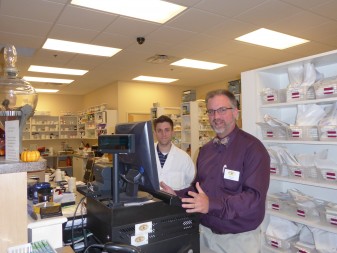 MISHAWAKA — Gazing upon a Norman Rockwell painting can evoke feelings of nostalgia. The images harken back to a simpler time in American culture, before the advent of smart phones and back when face-to-face communication built relationships. Without a constant rush to get everything done immediately, people took their time more often than not.

Pharmacist Dan Cline opened Mishawaka Family Pharmacy five years ago with these times in mind. It is a small, independent business that, according to Cline, has a “Norman Rockwell philosophy” so patients know someone is taking an interest in them as a person, not a prescription number.

Located in the medical office building on the St. Joseph Health System Campus, 611 E. Douglas Rd., Suite 104, Family Pharmacy has a pro-life mission that encompasses the health care needs of the whole person. Cline adheres to Catholic Church teaching and does not stock any oral, injectable or implanted contraceptives. Other barrier methods of birth control are also not stocked.

His concern for the dignity of human life does not end there, however. As a pharmacist, he assists patients as they journey through some of the most significant stages in life. He is often one of the first people to know when a patient is pregnant from simply noticing there has been a change in her medication regimen. He says that, at that moment, he considers it very important to offer his congratulations. According to Cline, “you never know when that encouragement of congratulations is the only time that they’re going to hear that in their pregnancy.”

For those facing the loss of their independence due to illness or aging, the business offers medication packaging services that can help patients who are feeling frustrated with managing multiple prescriptions. By utilizing this service, patients may be able to continue living independently for a little while longer.

An advantage of being an independent business is that he is not confined to a metric that dictates how much time each prescription should take to get processed, which may be the case with big-name pharmacies. In Cline’s words: “Our goal is to take care of you. It might take us an extra minute or two to finish up with the patient ahead of you, but I think they understand that they are going to get the same type of attention when it’s their turn.”

This is something that, according to Cline, is a goal of all pharmacists. “I think that all pharmacists, at the root of what they do, really do care about the patient. The question is, are they allowed to because they may have quotas that they have to meet. They’re just restricted by other structures that they can’t control.”

Cline says he sees his job’s daily duties as works of mercy. “We support those that are sick, comfort the afflicted and I think, for me, pharmacy is one way to do that.” He also remembers the patients he has encountered, in his prayers. “For patients to know that you’re praying for them is huge, and I offer prayers for my patients and for their healing.”

In the five years Mishawaka Family Pharmacy has been in business, Cline said he has experienced some unexpected obstacles. Navigating the changing health care system has been a challenge, but he is pressing onward trying to adapt and ultimately hopes to become more pro-active in his approach. He is grateful for the support he has found through South Bend’s Catholic Medical Guild. “We are able to support each other, which is really beneficial.”

Mishawaka Family Pharmacy offers a variety of services, and its pro-life mission affords every stage of life the dignity it deserves. A friendly face, a supportive ear and a word of encouragement make it a special presence in the Fort Wayne-South Bend diocese.