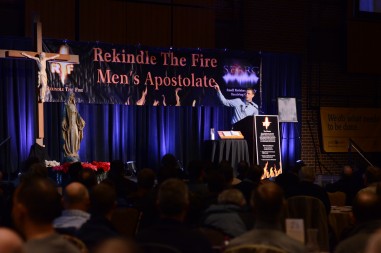 Dr. John Wood, Catholic author and optometrist by profession, points to the crucifix, as he speaks of the desperate need for daily commitment to sanctity from all Catholics, especially husbands and fathers. Wood was one of the speakers at the Rekindle the Fire Men’s Conference held on Saturday, Feb. 7, at the Century Center in South Bend. Nearly 1,000 men from the diocese and beyond attended the conference.

SOUTH BEND — Nearly 1,000 men from throughout the Diocese of Fort Wayne-South Bend and beyond joined together on Saturday, Feb. 7, for the fifth annual Rekindle the Fire Conference. They gathered to partake in the sacraments and gain insightful motivation from notable Catholic speakers on living as strong and holy men in the midst of a fallen world.

The day’s theme stemmed from the inspiration of famed Catholic apologist Matthew Kelly, who instructs “if we get the man right, we get the world right.”

Father Engo began the talks with energy and enthusiasm, encouraging the men present to be courageous and live with holiness. “There are many challenges, which stand in opposition to Christ and His Church. In response, we must be men who are unafraid and unashamed to live the Gospel! It begins here, recognizing that the first person I must evangelize is me; that every day I need to be turning from sin, choosing virtue, living in holiness, and by setting my sights on the glory of heaven.”

He stressed the importance of returning to God through His gift of Reconciliation. “Enter into the mercy and goodness of God, where we are given the grace not to sin again, where we will be transformed and converted to Jesus Christ, to be liberated from shame and guilt, and able to live as a free son of God again.”

Throughout the day, the opportunity for Confession and Eucharistic Adoration was offered to all, with 476 men becoming spiritually cleansed through participation in the Sacrament of Reconciliation.

Steve Ray next spoke about the importance of personal evangelization. A convert to Catholicism and passionate apologist, Ray emphasized the necessity of talking to others about the truth and beauty of the Catholic faith who might not otherwise have access to it. “There are people out there who would love to be Catholic if someone would just take the time to listen and share with them.”

Both Ray and his wife had been raised Baptist and only began to discover the truth about Catholicism when learning about it in an attempt to point out its theological flaws and fallacies. The Rays found that their questions regarding true worship, authority and morality could only be satisfactorily answered by the Catholic Church.

After their conversion, they sought to educate their friends and the local community about the truth of Catholicism. Ray stated, “Every Sunday afternoon for two years, our home was open and we advertised, “If you hate the Catholic Church, tell us why.” In a two-year period, we watched 200 people become Catholic.”

Ray, who has led hundreds of pilgrimages to the Holy Land and traced the journeys of St. Paul, urged the men in attendance to be the primary examples and leaders of faith in their families. He encouraged them to be active in the life of the Church, to participate in the sacraments and to “swim upstream to proclaim the Gospel against the devastating currents of the culture.”

Dr. John Wood, Catholic author and optometrist by profession, spoke of the desperate need for daily commitment to sanctity from all Catholics, especially husbands and fathers. “John Paul II says that, ‘If you want to destroy society, you destroy the family. If you want to destroy the family, you destroy the father; you destroy the man.’ The number one reason for poverty and for crime is fatherless children. I would also propose the reason 85 percent of Confirmation students leave the faith less than seven years later is also because of fatherless children. The man’s role is to guard and protect. We have to step it up and live our faith!” he said.

He highlighted a four-part action plan, grounded in the example and teachings of numerous holy men and women for transforming the world and allowing ordinary people to make an extraordinary difference. These steps include “understanding the mission that we are all called to be saints, to hold one another accountable so that we may lead ourselves and others to heaven, to become immersed in the glory of Scripture and the sacraments and to sacrifice joyfully and accept suffering with love.”

Ruben Quezada spoke about the importance of teaching children proper morality and the essentials of the Catholic faith, reminding the audience that “this is a battleground, we are the Church militant, and we are responsible for leading and acting with virtue!” He implored that elected representatives be held accountable for upholding the dignity of the individual and the common good, and reminded them of the importance for all Catholics to take their duties as fathers, husbands and American citizens seriously.

Quezada, who has been particularly and personally impacted by the examples of men and women who have died for the faith, also emphasized the importance of reading the lives of the saints for gaining inspiration and courage, especially accounts of the martyrs.

A lunchtime breakout session was held for the young adults in attendance to have the opportunity to further engage with the speakers in a question-and-answer session. Each shared what they believe are the greatest threats to masculinity and the family, as well as what gives them greatest hope for the future.

Father Muhlenkamp additionally gave a brief reflection, touching on the epidemic of pornography and sexual immorality within the culture. He shared that “across all age groups, viewing pornography is the sin most often confessed by men. In most cases, this is a symptom of the real issue of an individual lacking of true intimacy with God and others.” He shared advice and provided resources to aid men in overcoming this sin and finding ways to be held accountable in their struggle.

In his homily, Bishop Rhoades touched upon the commission given by Christ to live and preach the Gospel. He implored, “My brothers in Christ, I hope that this day has been a time of grace for you, that you leave here strengthened as men of God, men on a mission. The Church needs you to bring the saving Gospel of Jesus to your families, schools or places of work, to your communities and to the world. We must go out. We can’t stay put.  That’s our faith and our great hope: the victorious cross of Jesus!”