WASHINGTON (CNS) — The first day of the U.S. bishops’ June 16-18 spring assembly, held virtually because of the ongoing COVID-19 pandemic, began with discussion of how to proceed with a major topic the bishops will be taking up: the drafting of a formal statement on the “meaning of the Eucharist in the life of the Church.”

Initial debate for the first 40 minutes of the meeting focused on amending the meeting’s agenda to add time to the next day’s debate on drafting the document so as many bishops’ voices could be heard as possible on the “action item.”

The meeting opened with what is normally a routine vote to approve the meeting agenda, but Archbishop Mitchell T. Rozanski of St. Louis wanted to amend the agenda to ensure the bishops would not be limited by time in considering the drafting of a teaching document on the Eucharist by the bishops’ Committee on Doctrine.

He moved that more time be added to allow all bishops who wanted to speak to on the issue to do so during the planned debate period June 17. Cardinal Joseph W. Tobin of Newark, New Jersey, seconded it. 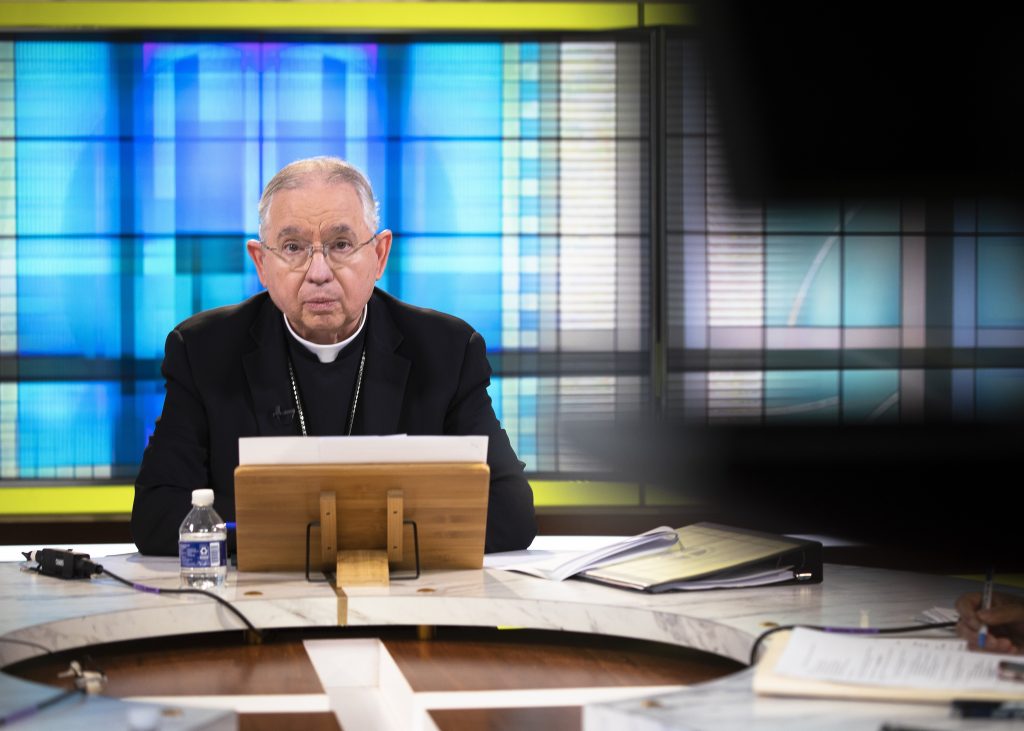 Archbishop José H. Gomez of Los Angeles, president of the U.S. Conference of Catholic Bishops, holds a news conference at the USCCB headquarters in Washington June 16, 2021, the first day of the bishops’ three-day spring assembly, held virtually due to concern over COVID-19. (CNS photo/Tyler Orsburn)

Among opponents of the motion were some who said allowing for unlimited discussion or even postponing such a discussion until the bishops convene in person for their November assembly in Baltimore would delay possible approval.

If that happened, they said, implementation of the teaching document would be put too far into the future.

Supporting the motion, Bishop John E. Stowe of Lexington, Kentucky, said he was concerned “some of our brother bishops want to rush” development of the document and focus on whether President Joe Biden, a Catholic, should receive holy Communion because he supports legal abortion.

Bishop Stowe cited a May 7 letter to Archbishop Gomez from Cardinal Luis Ladaria, prefect of the Vatican’s Congregation for the Doctrine of the Faith, who urged the U.S. bishops to proceed with caution in their discussions about formulating a national policy “to address the situation of Catholics in public office who support legislation allowing abortion, euthanasia or other moral evils.”

Bishop Kevin C. Rhoades of Fort Wayne-South Bend, Indiana, chairman of the doctrine committee, said the document being proposed would not be a national policy and therefore the process being followed in discussing whether to move forward fell in line with Cardinal Ladaria’s message.

The draft would explore “eucharistic consistency” and the Church’s teaching on the reception of Communion for all Catholics.

In a vote, the bishops defeated the motion for unlimited discussion time on the issue and then approved the meeting agenda.

In their respective addresses, Archbishop Pierre and Gomez both stressed the need for unity as the Church emerges from the pandemic year.

The nuncio said dialogue is a key step on the path to unity.

“That is important for us during this ‘Amoris Laetitia’ Year of the Family — to encounter families, even broken ones, and to accompany them on their journey through thoughtful dialogue,” he said in a prerecorded address.

Some of Archbishop Pierre’s remarks seemed to predict the difficulty the bishops could face June 17 in debating approval of the drafting of the Communion document.

“At the heart of dialogue is the communication of one’s own personal life to others,” he said, adding the goal of such dialogue “should be unity and not merely doctrinal and juridical unity.”

In speaking about the Church emerging from the pandemic, he said it should be a Church that models the good Samaritan and “goes forth with compassion and mercy, in solidarity with those who suffer in order to bring them true healing.”

Archbishop Gomez similarly spoke of the challenge before the Church after this past year.

Recalling the chaos of the pandemic, including lockdowns that shut down churches, social unrest and division and “maybe the most polarized election our country has ever seen,” Archbishop Gomez turned attention to Pope Francis’ directive: “the importance of unity — not only among peoples, but also unity within the Church.”

“Even with the lockdowns ending, our neighbors are still struggling,” he said in a prerecorded speech. “They’ve lost loved ones and livelihoods. Many have lost confidence in God and hope for the future. After being isolated for months, some have grown distrustful of our leaders and institutions.”

All the events of the past year or so, he said, will shape the vision of the Church “for years to come.” That’s why unity is important, he added.

He also noted that unity doesn’t mean bishops will never disagree, noting that even the apostles disagreed, “but never about the truth of the Gospel.”

The Church has to defend the truth about God, the sanctity of the human person and the unity of the human family, he said, adding: “This is our mission, the urgent task of the whole Church in this moment — after this pandemic, in the face of the chaos and confusion in our society.”

The bishops heard a preliminary presentation on three sets of translations from the International Committee on English in the Liturgy, or ICEL, on: the Blessed Virgin Mary, Mother of the Church; additional intercessions and psalter concluding prayers for the Liturgy of the Hours; and the Order of Penance.

Debate and a vote on each set was scheduled for June 17 — each requires two-thirds approval of the Latin-rite bishops. Following such approval, the Vatican Congregation for Divine Worship and the Discipline of the Sacraments needs to issue a “confirmatio” before the translations can be used.

“We continue to make steady progress,” said Archbishop Leonard P. Blair of Hartford, Connecticut, chairman of the bishops’ Committee on Divine Worship. “We’re hopeful we might have a completed new edition printed and ready for you by 2025.”

A presentation on the proposed “Pastoral Framework for Marriage and Family Life Ministry in the United States: Called to the Joy of Love” was given by Archbishop Salvatore J. Cordileone of San Francisco.

The chairman of the bishops’ Committee on Laity, Marriage, Family Life and Youth, which drafted the document, said the document’s framework addresses many challenging areas by providing guidelines for pastoral care. A debate and vote on the document was scheduled for June 17.

The framework incorporates a comprehensive overview of marriage ministry and outlines activities that pastoral ministers can initiate for Catholics living in a variety of family situations, Archbishop Cordileone said.

It begins with an emphasis on prayer and building a relationship with Jesus and explains Church teachings on marriage as “the permanent, faithful and fruitful union of one man and one woman.”

It also stresses that the family is the domestic Church and offers ways to guide families to pray together, regularly attend Mass and receive holy Communion, and “develop a family spirituality.”

The bishops voted on whether to approve the draft, with the vote tally to be announced the following day. A “yes” vote from two-thirds of the USCCB membership was needed for passage.