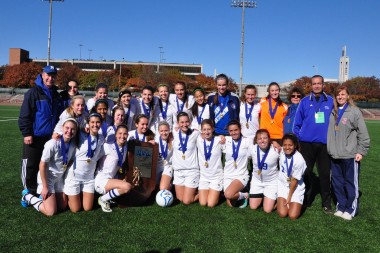 The Mishawaka Marian Lady Knights are the Indiana Class 1-A girls’ soccer Champions.

INDIANAPOLIS — A year ago, Marian’s girls soccer team lost the state championship game on penalty kicks. The Knights left nothing to chance in 2012.

“Last year, we had the talent, but we just didn’t have the confidence,” said sophomore D.J. Veldman. “We wanted to come back and redeem ourselves and show we belonged here and we did that.”

In fact, Veldman and her Marian teammates wasted little time delivering that message. The sophomore sensation took a Shannon Hendricks pass from the top of the box, and fired a shot to the left of Providence goalkeeper Autumn Meyer to give the Knights a 1-0 lead.

“That first goal gave us momentum,” admitted Charmat afterwards. “But Devin Smith helped us keep that momentum. She was excellent in net today.”

Indeed, the junior goalkeeper came up big in the 22nd minute. Providence’s Jordan Reger had a clean shot off a corner kick, but Smith made a diving save. A minute later, Smith’s best friend, the crossbar, came up with a stop on Kacey Wallace’s shot to preserve the 1-0 cushion.

Marian was able to change the field and take advantage soon after that. Hendricks took a direct kick from the top of the circle and fired a laser into the net to make it 2-0.

Marian overcame an injury-riddled start to the season, winning 18 of their last 19 to finish the campaign, 18-4-2. 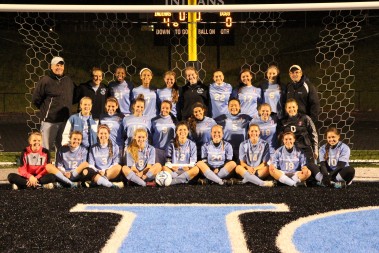 The news was not as good for Saint Joseph. Johan Kuitse’s young Indians squad lost to Evansville Memorial, 3-1, in the Class 2-A state championship game.

Saint Joseph had an early opportunity to take the lead, but Maddy Turner’s shot sailed just wide. Evansville Memorial dictated the action after that, outshooting the Indians, 15-2, in the first half. The southerners finally got on the scoreboard 30 minutes in when Gracie Lachowecki put a crossing pass on the foot of Kristen Parker for a 1-0 lead.

Lachowecki’s booming leg came through for Evansville with just 30 seconds remaining before half. The Miami, Fla.-bound senior netted her 42nd goal of the season with a booming blast from the 22-yard mark over the head of keeper Cat Edmonds.

Seven minutes into the second half, Saint Joseph looked to get back in the game. Turner used her powerful leg to drill a shot from 25 yards away into the upper left-hand corner of the net to make it a 2-1 contest.

It never got any closer. With 11 minutes remaining in regulation, Olivia Shafer connected on a diving header past Edmonds to account for the final score.

“Our four seniors set some high standards for a very young team,” remarked Kuitse of his squad that finished 21-3. “We lose some great talent, but we won’t change our expectations.”