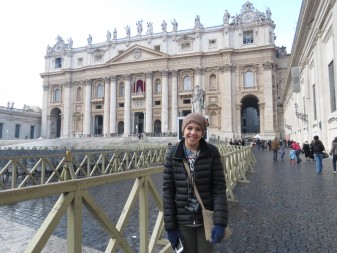 Marian High School student Brynn Harty stands in front of St. Peter’s Basilica during her visit to Rome where she sang with the international Pueri Cantores choir.

GRANGER — “He who sings, prays twice,” is a renowned quote attributed to St. Augustine of Hippo from the third century and one young Granger woman is taking his thoughts to heart. Brynn Harty joined her rich, melodic voice with 5,000 other youth from around the world to sing sacred liturgical music at the 40th International Congress of Pueri Cantores in Rome over the Christmas holiday.

The fourth child of Don and Melissa Harty, active parishioners of St. Pius X Parish in Granger, Marian High School freshman Brynn has been singing since she can remember. She recalls with joy performing in musical theater as far back as kindergarten. “Singing has always been my thing. I love it,” she said. By fourth grade, she was asked by her parish music director to participate in the inaugural Pueri Cantores choir performance in the Diocese of Fort Wayne-South Bend and has performed with the choir for five years. “Pueri Cantores let’s me do what I love and praise God at the same time!” said Brynn.

This bright and faith-filled young singer currently serves as cantor and altar server at St. Pius X Parish and is a member of the liturgical choir at Marian High School.

Pueri Cantores, which is Latin for “young choristers,” is a century-old practice established first in France in 1907, when a special boys’ choir was formed there to sing during liturgy, and reestablished in 1944 as an international organization. With the Second Vatican Council, girls’ choirs were permitted to participate and currently there are over 40,000 youth from 37 countries that sing in Pueri Cantores.

Pueri Cantores got its start in
the United States in 1953 with the American Federation Pueri Cantores and provides opportunities for school-aged youth choirs from all backgrounds to participate in liturgical music.

Last year the Hartys became aware of the 40th International Congress of Pueri Cantores and surprised Brynn at her eighth-grade graduation from St. Pius X School with a book on Rome and the chance to participate. Though there was no choir participating from this diocese, Melissa learned through the American Federation Pueri Cantores that a small choir of girls from Peoria, Illinois, would be traveling to Rome. After learning that Brynn had been involved in Pueri Cantores for five years, the director in Peoria, James Marck, welcomed her to his choir with open arms.

Brynn made the ninth member of the choir of girls ranging in age from first grade to high school. Of the girls there she said, “It was a small choir so I got to know them and bond with them. It was fun to be with them.” They would add their number to the 1,000 Americans who would travel to Rome for the experience of a lifetime.

Rehearsals began in summer of 2015 when the Hartys would drive the three hours to Peoria, and back home again the same day. During the school year, the hour and a half rehearsals were held on Wednesday evenings, calling the Hartys to the road directly after school. It was difficult for the young freshman but “I loved it! I loved the music and bonding with the kids,” said Brynn, who added that her private voice instructor assisted her with many of the pieces she would be singing in Rome over the holidays.

Christmas Eve found the Hartys arriving early in Rome to do some personal sightseeing and by Dec. 27, Brynn met with her choir in anticipation of the opening ceremony on Dec. 28. She recalled with delight the opening ceremony held at Pope Paul VI Hall. “It’s when all the nations were introduced. There were flags of every country with representatives. It was cool. There were 19 countries,” she said.

The next day, Dec. 29, the Pueri Cantores American and English speaking choirs gathered at St. John Lateran, the Cathedral Church of the Diocese of Rome, to sing at the Mass of Nations. As Brynn awaited the beginning of Mass she found that her father had been asked to fill in as lector at the Mass. “It was so cool. My mom got to say, ‘My daughter is singing in the choir and my husband is the lector,” said Brynn enthusiastically.

Dec. 30 was a day of rest for the Pueri Cantores choir and the Hartys took full advantage traveling to Assisi to take in the holiness of the place where St. Francis and St. Clare once walked. It was at Assisi that the Hartys celebrated Brynn’s 15th birthday. Back in Rome the family was inspired to renewed faith as they passed through the Holy Doors of several churches during this Year of Mercy Jubilee.

The Carols Around the World performance in the Pope Paul VI Hall, during which choirs sang carols representing the music of their countries took place on Dec. 31. It was fun during rehearsals with all the nations, noted Brynn, when a song was sung in a particular language, the members of the countries who spoke that language would stand. “Then you could see where everyone was from,” she said joyfully.

This of all days was the most exciting for Brynn and her family. During the rehearsal, Pope Francis arrived for the papal audience to greet the chanting mass of young choristers and divine providence would have Brynn in a perfect spot to see the papal shepherd. As Pope Francis approached her area, he reached out to her and took her hand. “After he shook my hand I was trying to comprehend what happened,” said the enthralled Brynn. “He is a great man. He has such a presence of Jesus around him and very inspirational.”

When asked about her favorite piece, Brynn didn’t hesitate, “The Halleluiah Chorus. I fell in love with it the first time I sang it.” The choir’s repertoire was sung in English, Italian, Latin, Spanish and German. Brynn noted that Latin is coming easier for her with her studies of it at Marian, but singing “Silent Night” in German “was difficult to learn.”

Now settled back home in Indiana, Brynn confided that the experience has changed her life. “It was a personal and moving experience for me. Being in Rome and feeling the presence of Jesus everywhere just brings you a lot of joy. In the papal audience the pope said something that really stuck with me… ‘Sing and walk,’ which means to be joyous at all moments in time,’ she said, adding, “I definitely have more of an optimistic view on life and seeing God’s moments in every way.”