The mission of St. Peter Parish is “To live the true, good, and beautiful,” something the parish that calls itself “the splendor of the south side” has endeavored to exemplify for 150 years and counting. On Aug. 13, dozens of parishioners, families, and well-wishers attended the opening event, a Mass and festival, for its 150th anniversary celebration.

The cornerstone of the church was laid on Aug. 11, so the opening celebration for the parish’s 150th year, held on the Saturday closest to that historic event, commemorated that. In his homily, Father Patrick Hake, Pastor of St. Peter, spoke about the importance of a cornerstone, not only for the building itself, but for the parish and the community as a whole. He also elaborated on the Gospel reading, where Jesus said that He came to set the world on fire. Father Hake reminded those present that they, too, must be on fire for Christ and to lead others to the truth of the Church. 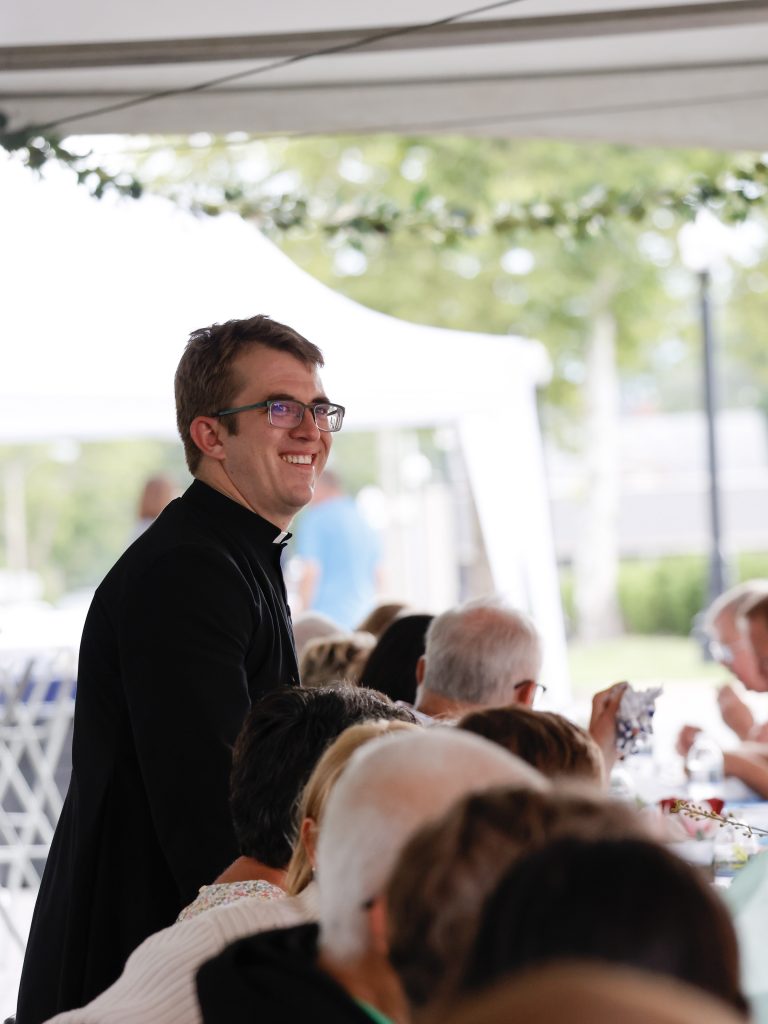 After Mass, Father Hake commented about the mission of the parish. “Our parish has been so blessed these past 150 years with such beauty here, and our goal is to pass that on to the next generation, to let everyone know who Christ is more fully, and just love Him more fully. That’s why we exist, to help them encounter Christ.”

The celebration included much more than food and fellowship. Parish artifacts from the diocesan archives were put on display in the parish hall for visitors to see. Additionally, a collection of relics were on display. Father Hake placed a relic of St. Peter, also a part of that collection, on the high altar for the Mass.

Parishioners offered Church tours for those interested in viewing the stunning Gothic-style church and learning about its long history. Grace Johnston led some of those tours. A parishioner for roughly 16 years and member of the Rosary Sodality, she stated that leading the tours helped her learn more about the parish history that she had not known before. One story she told was why the parish was formed. 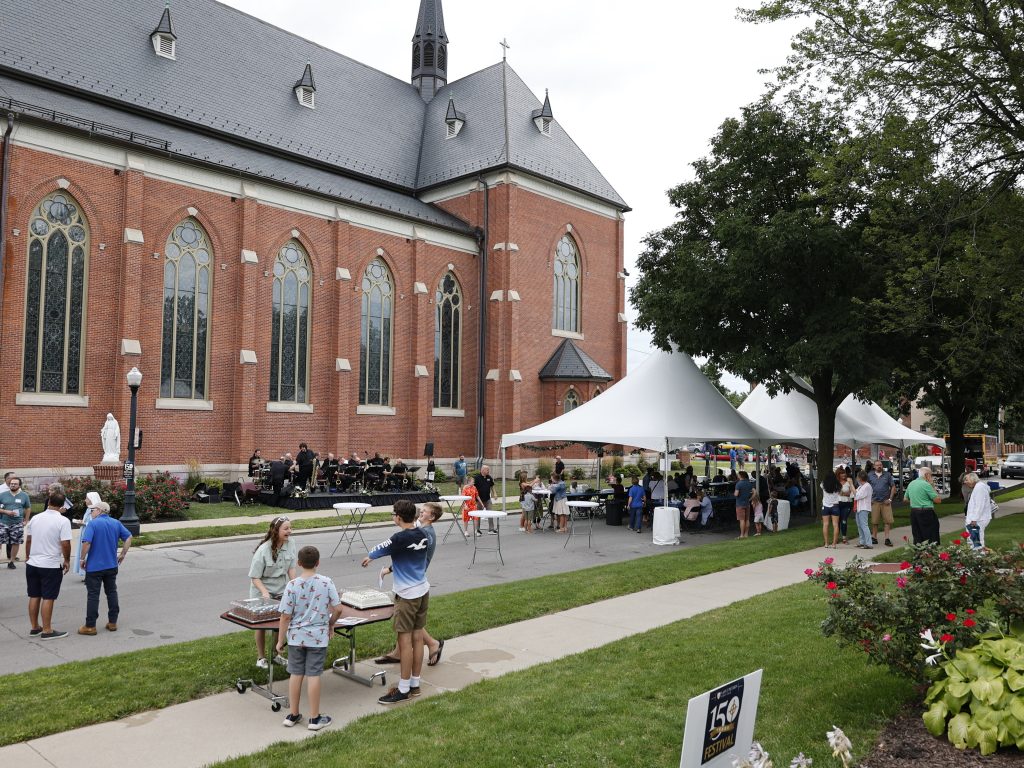 By the late 1800s, St. Mary Mother of God Parish, several blocks away, “was already a parish, but there were children who lived in this area and went to St. Mary’s for school, and they were parishioners there and they had to cross the railroad tracks. Unfortunately, a little girl was killed by a train crossing the tracks. And so, they had this built here,” she said.

When German immigrants began to flood into Fort Wayne, particularly the southeast side, they populated St. Peter in the years after the Civil War. The stations of the cross demonstrate this heritage. The German writing on the bottom of the wooden frames was rediscovered years ago after being covered up during the anti-German sentiments of World War I.

During the Second World War, the parish had grown so large that six Masses were celebrated on Sundays. The present church building hits a milestone this year, as well, turning 130.

Johnston began coming to the parish years ago with her husband, who grew up at St. Mary Mother of God before the old, Gothic church burned down in the 1990s, and she said that he missed that style of church. They had been attending another church, but came to visit St. Peter and “we really felt pulled to this church, so we came here.” 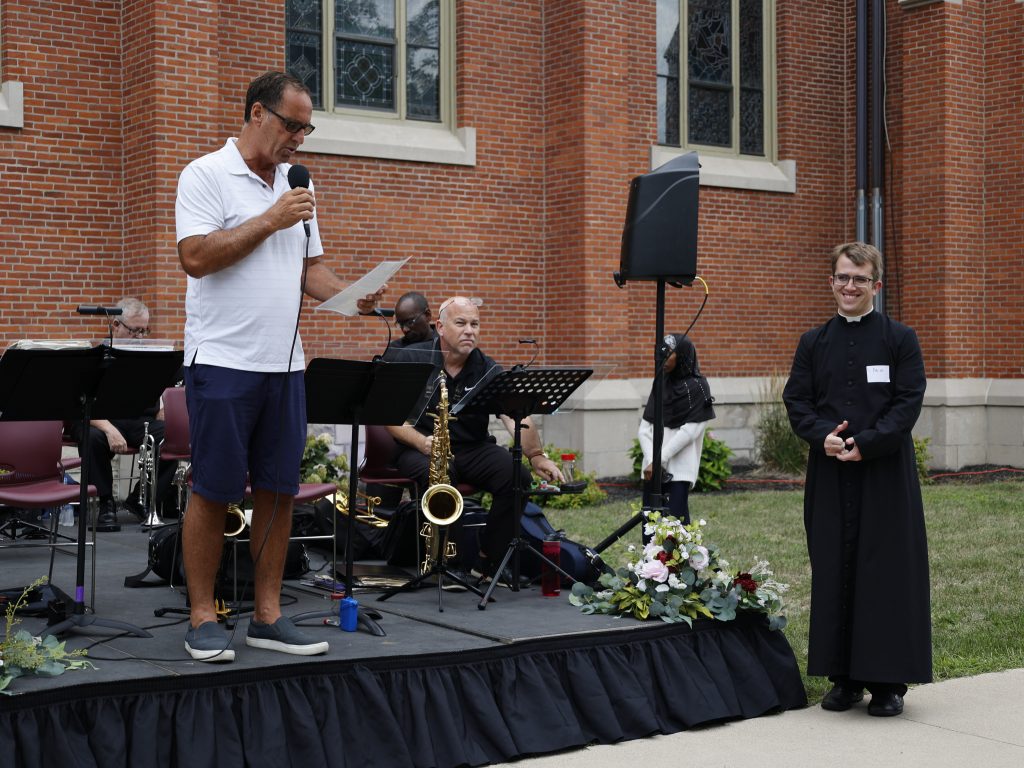 At the festival, Fort Wayne City Councilman Tom Didier came to read a proclamation from Mayor Tom Henry that declared Aug. 11, 2022, St. Peter’s Catholic Church 150th Anniversary Day, in honor of the spiritual welfare provided to the community by the parish for so many years.

But the parish is looking toward the future, and celebrating its recent growth. Both Johnston and Father Hake remarked on the numerous young families that have joined the parish over the last few years. Johnston spoke of the catechetical program undertaken at the parish, which involves both the children and their parents.

St. Peter has another rather unique aspect that many people, even parishioners, did not know about. It is a shrine to Our Lady of Perpetual Help, and weekly devotions to her have been reinstated on Wednesday evenings prior to Mass.

The parish festival was only the beginning of the celebration. Father Hake commented that the next event will be a scavenger hunt through the parish and Jacob Laskowski, who has been coordinating the anniversary events, said, “Every month we have a different thing that we are focused on, just to really bring the community in to St. Peter’s: the Catholic community, the neighborhood, and the greater Fort Wayne community, to help them experience the beauty that we have here.” 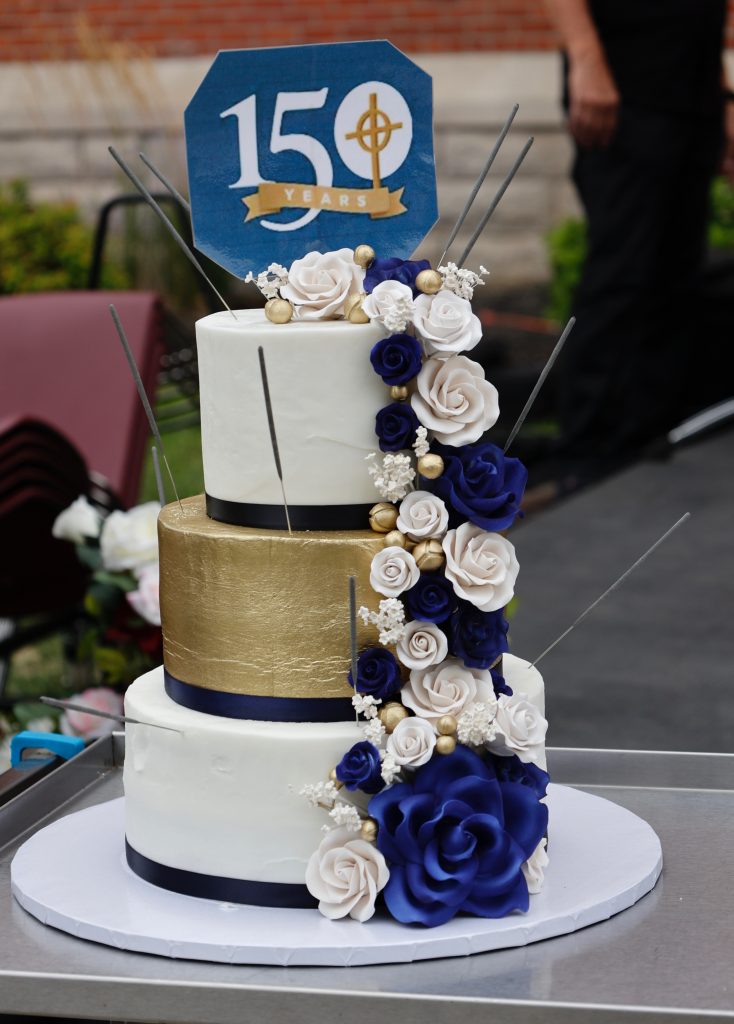 One of these is a collaboration between the parish and the Fort Wayne Museum of Art to present tours of the artwork inside the church in February. The researcher for that project, interestingly, is a recent hire of the museum and a new member of the parish.

The high point for the parish festivities will be a Mass of rededication celebrated by Bishop Kevin C. Rhoades on January 8. For updates on parish activities, please visit saintpetersfortwayne.org/.