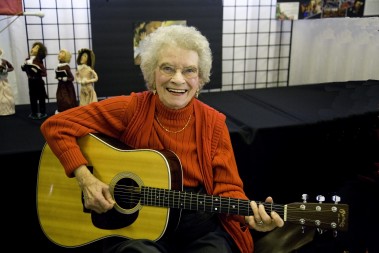 Margaret Freiburger, seated with guitar, assembles with the Freibuger orchestra to entertain guests at the Christ Child Festival held in November in Fort Wayne.

Although music has been, in Margaret’s words, “more of a hobby than a career,” the lively octogenarian admits to playing an instrument since the age of 9 when her parents, also musicians, taught her to play the Spanish guitar. As soon as she learned a few basic chords, her dad pronounced her ready to join his dance band and she continued in that role throughout her teen years.

The second stringed instrument she learned to play was the Hawaiian guitar, then the mandolin.

“I picked that up easily,” she says modestly. “I’m a play-by-ear person.”

The family lived in Kendallville and Margaret attended Kendallville High School where she learned to play bass viol and bassoon and was a member of the high school symphony orchestra. She was a talented enough musician that her instructor asked her to teach bass viol to five other students. She also recalls entering a state music contest and winning first place on that instrument.

In the mid-1940s Margaret moved to Fort Wayne where she discovered the Fort Wayne Civic Orchestra, which she calls the amateur version of the current Fort Wayne Symphony. Her musical talent was clearly in high demand and she played with a German band as well as a popular country-western square dancing band known as the Versateers.

Margaret married in 1949 and she and her husband had five children in rapid succession.

Though busy with child rearing in those early years as a young mother, she never lost her passion for music. And as the children grew, they became interested in music as well, so the Freiburger family orchestra was organized in 1966.

The orchestra grew to 13 family members at one time, she says, though it is currently down to five members. They are her daughter Caroline Dewey, who plays violin, daughter Eve Becker, who plays cello, daughter Ginny Hite on bass viol, granddaughter Sheila Hite on clarinet, and Margaret on Spanish guitar. They performed recently at the annual Christ Child Festival at Franke Park and play regularly at nursing homes and other venues in the Fort Wayne area, she says.

Margaret’s musical talent found expression throughout the 1970s and mid-1980s when she played bass viol and bass guitar with the Four Dimensions. And while her children were students at Bishop Dwenger High School, she recalls playing with the orchestra for the school musicals. “Music is a pure joy in my life,” she says with conviction. “I do it for fun.”

She advises young people who are learning an instrument, “Don’t be discouraged. Keep at it.” And even in her late 80s Margaret follows her own advice and continues to take on new challenges. She recently picked up the resonator or Dobro guitar, which she counts as her 12th instrument.

Tim Johnson, music director at St. Aloysius Catholic Church in Yoder who has played music with Margaret, says, “Margaret can play anything with strings.”

A convert to the Catholic faith since her marriage, Margaret is now a member of St. Vincent de Paul Parish where, for the past 44 years, she has been seen and heard playing her bass viol at the Saturday evening Mass there. She doesn’t always attend the group’s rehearsals since she’s played the traditional hymns “forever.” And even with the newer music, Margaret confesses that she can easily “wing it” once she’s heard the song.

Parish musical director Tony Andorfer says that she is “a wonderful person with a positive attitude.”

She admits, “I just love playing with them,” and adds that if the Good Lord is willing, she will continue to make joyful music for many more years to come.