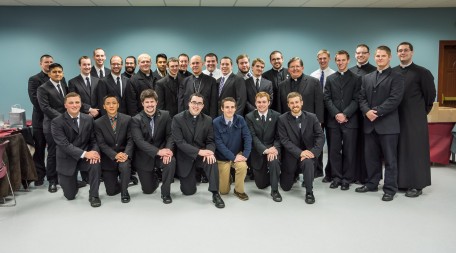 The Vatican has set the 51st World Day of Prayer for Vocations for May 11, the fourth Sunday of Easter, commonly known as Good Shepherd Sunday.

The theme for this year’s celebration, which in 2014 falls on Mother’s Day, is “Vocations, Witness to the Truth.”

Pope Francis, in a statement for the occasion said, “No vocation is born of itself or lives for itself. A vocation flows from the heart of God and blossoms in the good soil of faithful people, in the experience of fraternal love.”

Bishop Michael F. Burbidge of Raleigh, N.C., who chairs the U.S. Bishops Committee on Clergy, Consecrated Life and Vocations, noted the importance of prayer for vocations, especially for parishes and families, where vocations are nourished.

“Vocations to the Priesthood and consecrated life are sent by God and nourished in parishes and families,” said Bishop Burbidge. “We recognize this especially on May 11, which is Mother’s Day this year. Parents are instrumental in helping their children hear God’s call and in providing a prayerful atmosphere within the home where vocations are supported and nurtured. I encourage all families to pray together for an increase of vocations to the Priesthood and consecrated life from within their own families and parish communities. Such prayer is a special gift to the entire Church!”

All are welcome for refreshments and socializing afterwards. Information is available by visiting the parish website, iccauburn.org, or calling the parish office at 260-925-3930.

Many of the faithful of the diocese gather monthly for the Little Flower Holy Hour at St. Mother Theodore Guérin Chapel, on the grounds of the Cathedral of the Immaculate Conception, where, led by a local priest or deacon, they pray for vocations.

The initiative was laity driven. Bishop John M. D’Arcy, after his retirement, strengthened the holy hour.

The focus of the Holy Hour is twofold: First, that more men of good quality will come forward for the Priesthood in the diocese and beyond; and the second petition is for the sanctification of the priests of the diocese.

The structure of the holy hour includes hymns, Exposition and Benediction of the Blessed Sacrament, Scripture, homily, the rosary and silent prayer.

The schedule for the Little Flower Holy Hour is posted in the Today’s Catholic’s What’s Happening section and in parish bulletins.

The Serra Club is an international organization with approximately 18,000 members in 37 countries. The club fosters vocations to the Priesthood and religious life and encourages its members to fulfill their own Christian vocations to service. The Vatican has designated Serra as the lay vocation arm of the Church.

Serra clubs are named after Blessed Junipero Serra, who founded the missions along the California coast and evangelized thousands.

The Serra Club has two very active chapters in the diocese, one in South Bend and one in Fort Wayne.

Each club is a member of both a national council and Serra International.

Ray Vales, who is the Region 7 director of which the South Bend and Fort Wayne clubs are members, said, “Serrans are addressing one of the great needs of the Church, namely to foster more vocations and to support our current priest and religious. This is particularly so, with the call to evangelize. Also there is a great number of religious retiring, hence a great need for priests and religious to serve the faithful.”

Serrans offer support to the diocesan Vocation Office. The clubs sponsor a Christmas luncheon for the seminarians and their families every year, rotating between the Serra Club of Fort Wayne and the Serra Club of South Bend. Members of both clubs are encouraged to attend the ordination of new priests.

The Serra Club of South Bend is led by Susan Vales, the current president. The club meets twice a month at the Saint Joseph Regional Medical Center in Mishawaka. Members attend noon Mass at Our Lady of Fatima Chapel on the first Friday of every month, followed by lunch and a meeting. The club also meets on the third Wednesday of each month with dinner at 5:30 p.m. in the cafeteria followed by a speaker or program in one of the conference rooms.

Some of the Serra Club of South Bend activities include raising money for seminarian education through the sale of St. Joseph Father’s Day cards, recognizing Mass servers with a certificate of appreciation and support, participating in the Newman Connection to connect new college students with their respective campus ministry offices, adopting a priest and seminarian to pray for and send letters of encouragement and sending cards to priests on the anniversary of the ordinations to the Priesthood.

Father Paul McCarthy serves as the chaplain of the South Bend club. Each fall, members attend a retreat that he facilitates.

For those interested in membership to the Serra Club of South Bend, contact club President Susan Vales at 574-204-2084 or Vice President of Membership Mary Ann Pajot at 574-315-8661.

The Serra Club of Fort Wayne meets on the first Friday of the month at St. Joseph Hospital in Fort Wayne, for Mass at 11:30 a.m., followed by a luncheon with a speaker.

The Serra Club of Fort Wayne hosts a picnic in August for all the priests and seminarians of the diocese at Lake Wawasee. In October, the club hosts a dinner for all the sisters in the Fort Wayne area. In January, the club shares vocation magnets, which are given to fifth-grade students of Allen County Catholic schools. Each spring, the club honors students who are chosen by their schools as exemplifying Christian leadership from the two Fort Wayne Catholic high schools.

Deb Andrews, who serves as the club secretary, noted, “We have an Adopt a Seminarian program. A Serran chooses a seminarian and supports him through prayer, getting together with him when he is home, sending care packages or whatever else the adopter wants to do. This usually carries on after they have been ordained.”

Terry Coonan, the father of two diocesan priests, is the president of the Serra Club of Fort Wayne, and Father Tony Steinacker serves as the chaplain.

Andrews told Today’s Catholic, “Any actively practicing Catholic male or female, 18 years or older, is welcomed to join our club. If they do not know a Serran, they can speak with their church office or call the diocese to get the name of the president and the president would invite them as a guest to the next meeting. They can come as a guest and see what we do and how the program works. If they decide they would like to join, an application is given and they need to fill it out and give it back to a Serran that can get it to the board.”