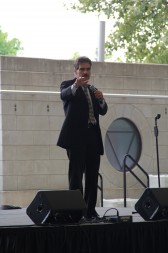 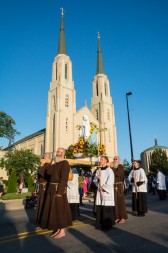 The Franciscan Brothers Minor carry a statue of Mary to lead 1,200 faithful who participated in the Marian procession from the Cathedral of the Immaculate Conception through the streets of downtown Fort Wayne to Headwaters Park. The brothers work closely with the Knights of Columbus on the implementation of events.

FORT WAYNE — Twenty-two councils of the Diocese of Fort Wayne-South Bend Knights of Columbus combined their talents to sponsor and coordinate the Festival of Faith to celebrate the Catholic faith and family. The third annual event was held at Headwaters Park in downtown Fort Wayne Aug. 15-16.

The festival opened on the solemnity of the Immaculate Conception. Bishop Kevin C. Rhoades celebrated a 6 p.m. Mass at the Cathedral of the Immaculate Conception in which he rededicated the Diocese of Fort Wayne-South Bend to Mary. The Knights, in collaboration with the diocese, encouraged the faithful to prepare for individual consecration to Mary by using the “33 Days to Morning Glory” retreat prepared by Father Micheal E. Gaitley, a priest of the Congregation of Marian Fathers of the Immaculate Conception. Diocesan wide, over 12,000 faithful made an individual consecration to the Blessed Mother either at the cathedral, home parishes or individually. At Mass, nearly 2,000 faithful attended and the congregation flowed outside to the cathedral’s plaza and lawn areas. At the Mass, Bishop Rhoades blessed brown scapulars to be distributed at the festival.

A large Marian procession — with 1,200 participants — walked through the streets of downtown Fort Wayne to Headwaters Park followed the Mass. The rich ethnicity and religious communities of the diocese were well represented in the procession that was led by high school choirs, Franciscan brothers and the Knights of Columbus. Vietnamese Catholics of St. Patrick Parish, Fort Wayne, dressed in ethnic garb, carried another statue of the Blessed Mother. The Hispanic communities of St. Patrick and St. John the Evangelist, Goshen, and other parishes sang hymns to Our Lady in Spanish. The streets were filled with devotional hymns to the Blessed Mother as bystanders watched from cafes and along the sidewalks.

At Headwaters Park, the faithful assembled and Bishop Rhoades led the Litany to the Blessed Mother and sang “Immaculate Mary.” The festival was kicked off with prayer followed by food, drinks and a square dance.

The Festival of Faith offered many elements to add to the fruits of consecration. On Saturday at the festival, area priests heard Confessions, the rosary was prayed and the Knights of Columbus’ Shroud of Turin replica and video were displayed.

At the tables, a flyer published by Our Sunday Visitor called “Living the Beatitudes: The Path to a Happy Life” and brown scapulars with literature were distributed as well as a bumper sticker encouraging the recitation of the rosary for the nation.

Dr. Ray Guarendi, the popular Catholic radio host of “The Doctor is In” encouraged the hearts of parents when he spoke of “Laughter: The Sanity of Family” and later in the evening, “Why Be Catholic?” During the evening talk he spoke about ways to be certain that the faith and teachings of the Catholic Church represent the true Christian faith.

The Franciscan Brothers Minor of Fort Wayne provided children’s games, rides and give-aways for families. In the afternoon, the brothers judged the pie-baking contest.

Dr. Ray Guarandi gave two talks at the Festival of Faith on Aug. 16.

Franciscan Father David Mary Engo, the minister general of the Franciscan Brothers Minor, spoke at the festival about the Shroud of Turin.

Mark Michuda, chairman of the Festival of Faith Planning Committee, told Today’s Catholic the vision and purpose of the festival is to bring every mission in the diocese together “to celebrate our faith publicly.” Because the Knights of Columbus are integrated through many parishes in the diocese, they are in a good position to get that work done. He said the public event is a method of evangelization and an opportunity to fortify the faith.

Fourteen Knights of Columbus councils offered financial support and nearly 300 volunteers, including the Knights, Redeemer Radio and diocesan staff, were all part of the organization and labor of the festival.

“These councils come and work together because of this festival,” Michuda said, and the visibility of this helps enhance the awareness of the Knights’ mission and membership numbers.