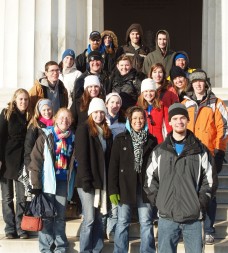 The group was founded in January 2009.

The purpose of the organization, according to Bigelow, is to organize and activate pro-life students on campus. Bigelow says members of the organization advocate to save lives threatened by induced abortion, euthanasia and the destruction of human embryos for research.

One way the group brings about awareness is through chalk walks. “During chalk walks we write pro-life messages in chalk all around our campus,” Bigelow says. “We want to help those women who are affected by abortion or who are thinking of abortion. When we do our chalk walks we want to be sure they know places they can go for help such as the Women’s Care Center or A Hope Center both here in Fort Wayne.”

“Last semester we had a Pro-Life Awareness Week, where we took over the middle of campus and filled it with booths that discussed all life issues,” Bigelow says. “We also had a huge calendar set up in the middle of campus. The calendar was a visual for everyone on campus to see the number of abortions that take place in one month just in the state of Indiana. We had pink and blue flags to represent lives lost through abortion. Every hour more flags were added because more lives were lost. Through the display we had much discussion, and change of hearts.”

Bishop Kevin C. Rhoades supports the organization’s efforts through prayer and donations. He recently celebrated Mass with many of the 90 members and the Newman Group. Many members had conversations with Bishop Rhoades at that time.

The best part about the bishop coming to celebrate Mass with your organization, Bigelow says, was “I enjoyed sharing stories with Bishop Rhoades after we celebrated Mass. It was nice to get to know him.”

Some of the stories spoke to other big local endeavors, including IPFW Students for Life group participation in the 40 Days for Life campaign and volunteers with Allen County Right to Life.

In conjunction with the University of Saint Francis Cougars for Life, IPFW Students for Life shared a bus and traveled to the nation’s capital to participate in the March for Life. They also participated in the largest pro-life conference in Bethesda, Md., where they met and learned from many pro-life advocates such as Scott Klusendorf and Alveda King.

Bigelow says that IPFW Students for Life plans on participating in the National March for Life again next January.

IPFW Students for Life empowers students to influence life-giving change. Bigelow enjoys being a part of the group because she feels “like I can make a difference in our community, and for the lives of the unborn and women.”

She says that the group meets every other Thursday at various locations on IPFW’s campus. For information about IPFW Students for Life, email [email protected]