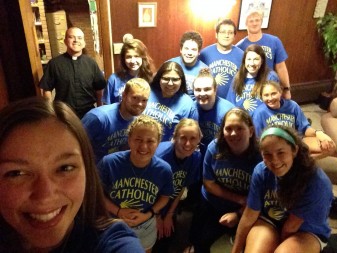 Other parishes in Wabash County include: 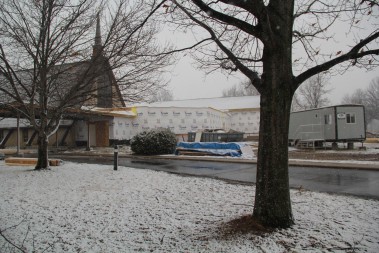 St. Robert Bellarmine Parish in North Manchester is under construction with the addition of a gathering space and community hall.

NORTH MANCHESTER — Nestled on the eastern outskirts of North Manchester in northern Wabash County is the bustling parish of St. Robert Bellarmine. Hammers, saws and the sounds of construction can be heard daily as a new parish center and gathering space is being built to the northwest of the church.

Relating to the perspective of Pope Francis, “it really is kind of a parish on the peripheries,” said Father Curry. “It’s not a parish that people run across or hear about.”

A small community of Catholics started St. Robert just over 50 years ago. The origins of the church were in a North Manchester storefront.

“It is a parish made up of some farmers, business owners, workers, and university teachers and college students,” described Father Curry. “And now we are starting Hispanic ministry as well.” Many of the Hispanic parishioners are employed in agriculture.

Members of the Manchester Catholics from nearby Manchester University gather on Thursday nights for song, “Lectio Divina” and discussion.

Father Curry, who spent the summer weeks last year in Guatemala, was immersed into a Spanish language program. That has been beneficial for Father Curry and the growing Hispanic community of the church. The parish has two Sunday Masses in English and two Masses in Spanish.

The religious education program has grown from 15 students to about 50 with the Hispanic population.

The two communities come together for events such as the Irish Fest, a Wine and Cheese Night, which recently included a talk on the origin of Scriptures by Jacob Alles, and Friday Night Soccer and Food.

St. Robert is a small parish with 125 families, “but when you look at what we are doing, you realize there is a lot going on,” Father Curry said.

At nearby Manchester University, the Manchester Catholics meet on Thursday nights for song, “Lectio Divina” and discussion. Building faith households is also in the process. Instead of creating just one large group, “you encourage them to look at who their friends are and form their own Catholic group based on the Catholic friends they already know with some weekly commitments such as a meal together, coming to read the Gospel from that Sunday together, and some sort of Catholic devotional.” Once a month, the households would gather at St. Robert and participate in a Sunday Mass and get involved. 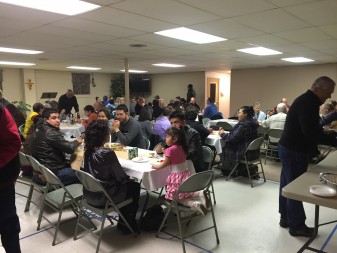 Members of St. Robert Bellarmine Parish in North Manchester gather for a dinner at a parish function.

Parish ministries include the Knights of Columbus, which is in the process of becoming its own council, Wednesday night Bible study, Wednesday night Hispanic dinner and presentations, a Communion-to-the-homebound team, religious education and a growing music program.

Father Curry is also active in the renewal of Cursillo in the diocese and making it a viable option in the New Evangelization. Cursillo involves a transformative weekend and then forms the retreatants into ongoing friendship groups. Cursillistas get together to pray and hold each other accountable to praying, studying the faith and putting it into action in their daily life.