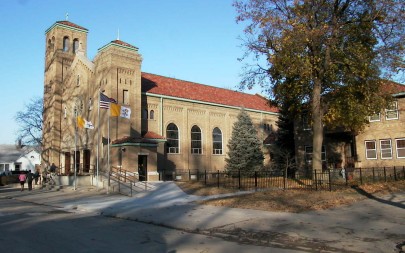 St. Joseph Church in Garrett has long been a gathering place for the small city located just west of Auburn.

St. Joseph Parish in Garrett has a lot to offer parishioners, and one is a parish school that’s been given a four-star rating from the state.

The parish has about 300 registered households and a St. Martin de Porres Center that includes a soup kitchen that serves carryout dinners every Monday and Thursday from 4-6 p.m. The tangent Martin’s Clothes Closet is open Tuesdays and Wednesdays from 9 a.m. to noon and Thursdays from 4-6 p.m.

St. Joseph’s has a children’s and adult music ministry, homebound ministry and many of the ministries that most parishes have, as well as opportunities for liturgical involvement in the roles of altar server, lector and Eucharistic minister.

History of the church

According to a historical account of the town of Garrett, Rev. August Young was the first priest in Garrett. He first held Mass in a tent in 1872, and within a year built the first church. Around 1888, Rev. Young commissioned the building of a two-story schoolroom. In 1893, the church was enlarged, and in 1897, Rev. Young purchased eight acres of land for Calvary Cemetery.

In 1929, a new church and rectory were built in Italian Renaissance style with buff brick and terra cotta. Father Young was also credited with building Sacred Heart Hospital a block away from the church. In 2000, the church underwent a renovation project that included a new altar and windows. 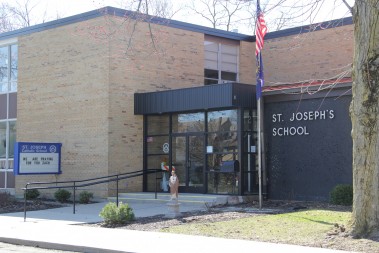 St. Joseph School offers preschool for 3- and 4-year-olds and kindergarten through seventh grade. The Four-Star School is led by Principal Kristine Call.

The school has an active Home and School Association that sponsors activities to support it. This month, HASA sponsored a pumpkin festival with games, prizes, lunch and fellowship. It also sponsors a chili cook-off and a merchant’s Bingo.

Students at St. Joseph are well rounded, because the school also offers art, science, recreation and athletics. It holds an art fair and a science fair. The school also offers Catholic Youth Organization volleyball for girls in grades five and six August-October, girl’s and boy’s Basketball from November-January for grades five-seven and girl’s softball for grades five-seven. It offers chess and checkers tournaments, bowling, swimming and fieldtrips. School readers even get to celebrate with the Tin Cap — the mascot of the Fort Wayne Tin Caps minor league team.

Father Jim Shafer was installed as pastor of St. Joseph in July, and said it was like coming full circle. He was born at Sacred Heart Hospital, one block from the church and the parish where he grew up and attended school.

He attended Our Lady of the Lakes Seminary in Syracuse to finish high school and start college. The death of his mother while he was in seminary shook him up to the point that it led him away from his vocation, but unable to ignore his calling, he re-entered the seminary several years later.

Father Shafer cited St. John Paul II as a big influence in his priesthood. He reportedly embraces a saying that the former pope used to give seminarians and priests: ‘Love for Jesus and His Church must be the passion of your life.’ It’s the saying he posted on both sides of the door he uses to come and go between the church and rectory.