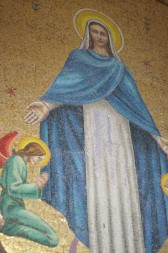 An all-tile mosaic depicting the Immaculate Conception used to be at the outdoor entrance to the church, so “she has weathered rain, snow and hail” according to Lisa Hess, parish administrative assistant. The church recently built an enclosed gathering space, so the mosaic of Mary is now inside the entrance.

Father Wrozek said he’s been warmly welcomed at his new parish. “I’m excited about the people’s response to me — it’s been over the top,” he said.

There are approximately 335 registered households in the parish, according to Lisa Hess, administrative assistant, and there are some pretty active ministries within the parish.

Religious education for adults, with coffee and doughnuts, is offered each Sunday after the 8 a.m. Mass. The rosary is prayed after each weekday Mass. The parish has a Knights of Columbus group, for men aged 18 and older, which meets monthly on the first Tuesday. The Ladies Guild is similar to an altar/rosary society group and is for women aged 18 and older. It meets monthly on the second Thursday of the month. On Oct. 15, the guild hosted a bake sale for seminarians.

Immaculate Conception has a ‘Couples with Kids’ group for married couples with children. They meet once a month for family activities or faith discussions. Recent activities include a marshmallow roast, hayride and outdoor movie nights. The group even has its own Facebook page — Couples-with-Kids-at-ICC.

The parish offers a middle school youth group called Edge that meets Sunday evenings and a high school youth group that meets Sunday mornings. In addition, there is an adult music ministry, liturgical linens service ministry, a church archives ministry and more. Immaculate Conception has an adoration chapel that is open from 6 a.m. to 9 p.m. A Catholic cemetery is located about a mile and a half away. 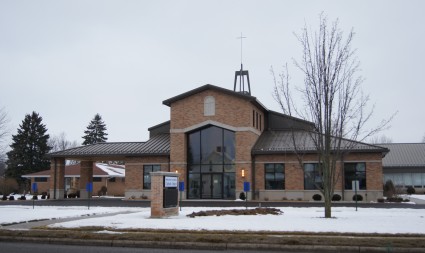 Immaculate Conception Church in Auburn is an active parish with ministries for all ages.

The first Mass offered in Auburn took place on August 5, 1871, at the Engelbert Ashley home with seven families present. Recognizing the need for a church, a committee was formed. They bought land, made plans and on Oct. 18, 1874, the church on the corner of Fourth Street and Railroad Street (now Indiana Avenue) was dedicated. In 1912 it was enlarged, and the building continued to serve the local Catholic community until 1958.

Groundbreaking for a new church, parish hall and school on East Seventh Street took place on Aug. 4, 1957. The new church was dedicated on Sept. 21, 1958. A convent for the school sisters and a new rectory/church office were also built. The school closed for a time during the 1970s.

Beautiful Stations of the Cross from the original church, oil paintings on tin, were brought over to the new church, framed in wood by a parishioner and are still hanging. They were featured in a diocesan book about the Fort Wayne-South Bend parishes.

An L-shaped addition was built onto the east and south sides of the church, enlarging the parish hall and kitchen. The parish calls this addition FFG, “For Future Generations” — and it is utilized in a variety of ways. The south entrance contains six beautiful stained glass windows created by parishioners Janet Kressler and Pat Schlosser. Bishop Kevin C. Rhoades dedicated the FFG area on Dec. 8, 2012.

Over the years, parishioners at Immaculate Conception Church have shown dedication, commitment to their faith and foresight to plan for future generations.

Father Wrozek said although he missed the people he’d grown to love at his last parish, he’s excited to be at Immaculate Conception because of the people he’s already met.

“And the things I’ve heard they’re doing in this parish: The staff is so pro-active in doing things for the community and for the body of Christ here at ICC!” Father Wrozek laughed, saying he’s already learning to use the abbreviated name “ICC.”

Father Wrozek said at his last parish he was asked if he could celebrate Mass in Spanish, and although he only had one year of high school Spanish, he studied the books and began celebrating Mass in Spanish. That’s something he may offer at some point at Immaculate Conception. “I believe if you build it, they will come,” he said.

However, he has no immediate plans for change. “My plan is I’m going to listen a lot: to see what the people want from me and see what needs I can fill. I want to find out where the people are and what they want,” he said.

“My job is to bring together, not tear apart,” he said. “I’m enjoying them, and I hope they’re enjoying me!”