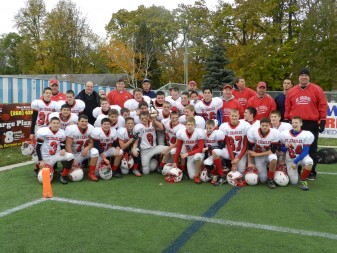 FORT WAYNE — The best of the best met in youth football’s pinnacle, the 2013 diocesan showdown, on a crisp, sunny Sunday afternoon, Nov. 2, at Fort Wayne’s University of Saint Francis field. The Catholic Youth Organization (CYO) teams won both contests, but the Inter-City Catholic League (ICCL) teams from South Bend did not go down without a fight.

The first game slated two like-matched teams, but it was Fort Wayne’s St. Charles Cardinals that outlasted a powerful Panther squad from St. Anthony/St. Joseph/St. Pius X by a score of 20-14 to claim the bragging rights for the south.

The Panthers scored first to start the back and forth. The St. Charles team answered with a drive of its own highlighted by a 46-yard Eddie Morris to Bradley Black pass and capped off by a 7-yard run by T.J. Tippmann. The Panthers responded with another score but St. Charles answered before the half with Morris scoring on an 18-yard bootleg run to tie the score at 14-14 heading into halftime. 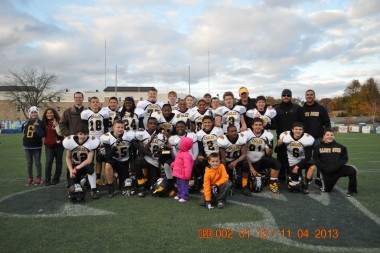 Coach Sam Talarico described the second half as two heavyweight boxers throwing punches at each other. With four minutes remaining in the game, Morris found Tippmann on a screen pass that was good for a 27-yard touchdown scamper. The Panthers then put together an impressive drive down to the 2-yard line with just over a minute left in the game, however, their drive stalled when Tippmann forced and recovered a fumble for the Cardinals.

The Cardinals found themselves with their backs against their own endzone and were not out of danger until Morris’ cannon connected with Collin Reed on the game sealing 35-yard pass.

“You can not make mistakes against a good team like St. Charles,” Panther Coach Shawn Bays admitted.

“It was a very tough loss, but a good battle,” he summarized.

Once again, the Panthers’ workhorse, Charlie McFadden, dominated the ground game with another 100-yards-plus rushing game and a score. Quarterback Ben Lamont hooked up with J.P. Lewis for the other touchdown. 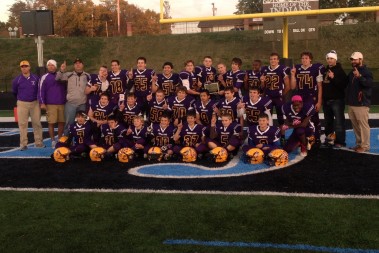 The Mishawaka Catholic Saints team at the diocesan playoff game on Nov. 3. The Saints won the ICCL championship a week ago in double overtime.

A pleased Cardinal Coach Sam Talarico summed up his unit’s outstanding year, “Anytime you end a CYO season with a win in November, it’s a great season. I am very proud of all of our players — our eighth-grade class came a long way from last year and our defense bent but did not break in defending against the Panther running back.”

He was very impressed with his opponent, “McFadden is one heck of a running back who was a bear to bring down and he was no fun to defend. He routinely made seven or eight yards after getting hit at the line of scrimmage.”

The coach continued his kudos, “Reed and Black made big play after big play for the Cardinals and Morris had his best game of the year. Issac Blume was a huge playmaker for the defense and finally, our offensive line had their best game of the year — Jake Vanek, Will Nelson, Jake Fabini, Joe Tippmann, Blake Davis and Adam Lightner gave Morris time all day long to find his receivers.”

Talarico concluded, “I am really excited for next year since so many seventh graders played a key role in our victory today.

Next up, the St. John the Baptist, Fort Wayne/St. Joseph-Hessen Cassel (SJFW) Eagles squeaked by the Saints from Mishawaka Catholic after an explosive fourth quarter of action, 25-20. It was another gritty showdown, a classic contest of power vs. speed full of athleticism, talent and aggression. The Saints scored first and took a 8-7 lead at halftime. They kept control until late in the fourth quarter when the Eagles’ speedster Dashon Bussell rushed in a score to take their first lead of the game, 19-14. However, the Saints were not finished. They answered back with 1:27 left on the clock with their standout tailback, Julian Keultjes’ 50-yard run, his third touchdown of the game and took what they hoped was the final lead, 20-19. But Bussell had one more score up his sleeve to dash their hopes with 21 seconds remaining in the game.

Both of these decorated programs have seen their share of big games. After 30 years of coaching and 10 trips to the playoffs, Mishawaka’s beloved Tony Violi did not remember ever facing SJFW.

“It was fun to come to Fort Wayne and finally play against Jim Carroll and the Eagles. They always have good teams, but I don’t think my heart can take any more close games (the Saints won the ICCL championship a week ago in double overtime).”

The Saints were undefeated coming into the match-up and despite the loss in the final seconds in Fort Wayne, Violi praised his squad, “I could not be more proud of this team; never in a million years did we think we would’ve made it to this game.”

Carroll, who tallies a career record of 88-30 and four diocesan championships will step down after 12 years as head coach. He hopes to help out at the junior varsity level next season and wishes to thank all the coaches, great kids and his wife, Amanda, “I have been blessed, honored and touched to have had the joyful opportunity to coach the Eagles.”