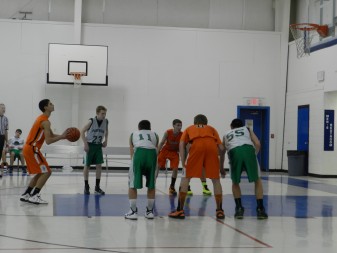 FORT WAYNE — The annual Catholic Youth Organization (CYO) vs. Inter-City Catholic League (ICCL) showdown between the two ends of the diocese took place on Saturday afternoon, March 2, at St. Joseph-Hessen Cassel in Fort Wayne as the best teams from South Bend matched up against the top Fort Wayne squads.

The ICCL’s regular season winner, St. Pius X, Granger, who earned a guaranteed spot in the tournament, had scheduling conflicts, so St. Joseph, whose standout seventh-grader, Josh De St. Jean, also was unable to make the trip, ended up facing both the CYO’s Blue League champs and Gold League runner-ups. The other representative from South Bend was St. Matthew, who won their year-end tourney by knocking out St. Pius to earn a trip to Fort Wayne to play the league and CYO champs — St. Vincent de Paul.

First up, a talented group from St. Joseph, South Bend, beat Jim Knapke’s Hessen Cassel team, 40-34. The Squires jumped out to a 13-9 lead in the first quarter and took a six-point lead into the locker room, but St. Joseph’s full court press and big third quarter from Trey Shabazz down low took over. Unable to regain their early momentum, the Squires missed a string of free throws and some late three’s bringing a close to their stellar season. In the victory, Shabazz ended up with 19 and Abram Beard was high scorer with 13 for Hessen Cassel.

St. Joseph Coach Brian Ratigan was pleased his team was able to play twice, “While we are making the trip, it is a great opportunity. These boys would play all day if they could.” However, Ratigan’s team did not fare as well in the day’s final matchup, coming up short, 25-57, against the CYO league’s tallest line up, St. Joseph-St. Elizabeth (SJSE), who starts a Bishop Luers-bound group of 6-foot, 5-foot-11-inches, 5-foot-11-inches, 5-foot-10-inches and another 5-foot-10-inches.

Ratigan admitted, “They were much bigger and consistently beat us up the floor. When they did slow down and run a half court offense, we could not stop their inside game. Overall, our guys still had a great time and we appreciate the efforts made on the Fort Wayne side to make this annual event a fun experience.”

Andrew Burgess had seven points in the loss for St. Joseph.

Coach Brian Cook’s Panthers finished with an impressive 21-9 record for the season with Carter Gillie, the team’s leading rebounder and top swatter, getting high scoring honors of 17 in the contest. Inside force and top free throw shooter, Brendan Gleeson and offensive powerhouse, Jimmy Sturm, added 11 each. Point guard, Blane Cook, orchestrated the offense once again for SJSE, adding 11 more assists to his 100-plus season with John Korjenek helping out with the duties. Once again, Cook could not have been more pleased with his whole team, including the phenomenal supporting role his bench played.

In the all-star day of hoops, the middle game saw Fort Wayne powerhouse, St. Vincent, downing the Blazers from St. Matthew. Up 24-10 at the half, the Panthers and top dogs, Conlan Martin and Jalen Paul, whose aggressive play and “challenge everything-style” proved effective one last time.

For St. Matthew, Justin DeClark led in points with 13. Robbie Sink, Nathan Marino, Casey Szymanksi and Joseph Cline rounded out the scoring. The Blazers were 8-12 from the free throw line, shot 11-31 from the field and had 30 rebounds in the contest. Thanking the CYO hosts, Coach Rob Sink summarized, “It was a fun trip for our team to come down.”