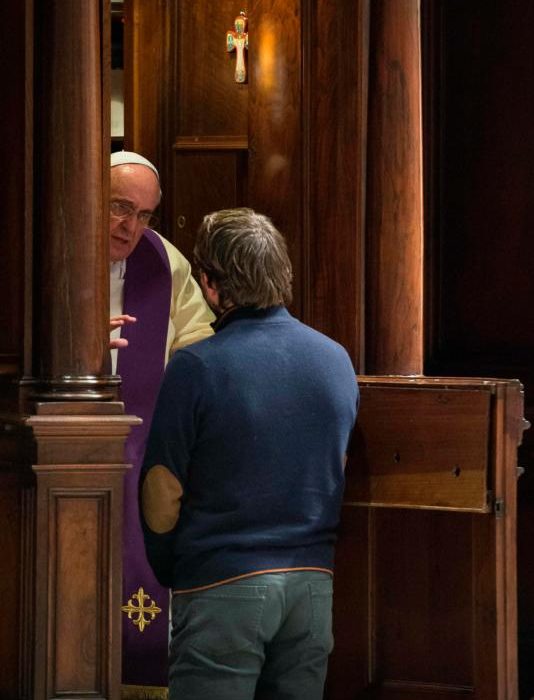 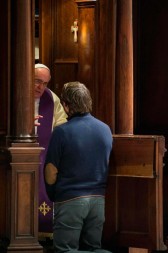 Pope Francis hears confession from a man during a penitential liturgy in St. Peter’s Basilica at the Vatican in this March 28, 2014, file photo.

VATICAN CITY (CNS) — The number of people going to confession in St. Peter’s Basilica increased noticeably in the first months of Year of Mercy, but not among English-speakers, who apparently are staying away from Europe out of fear of terrorism, said the rector of the basilica’s team of confessors.

Conventual Franciscan Father Rocco Rizzo, the rector, told the Vatican newspaper that from the opening of the Holy Year Dec. 8 and through February, he heard about 2,000 confessions in St. Peter’s.

But, he said, “we are noticing that the majority of penitents are Italian. I think that is due to the alarm over terrorist attacks” following the series of attacks in Paris in November. “This is why the English-language priests have fewer confessions this year.”

In an interview published in the March 10 edition of L’Osservatore Romano, the Vatican newspaper, Father Rizzo said that in addition to the 14 Conventual Franciscans assigned full time to the confessionals in St. Peter’s Basilica, another 30 of their confreres are supplementing their work during the Holy Year.

The Conventual Franciscans hear confessions every day from 10 a.m. to 1 p.m. and from 3:30-6:30 p.m. in the winter; they stay until 7 p.m. in the spring and summer. In addition to Italian, Spanish, English, French, German, Portuguese and Polish, confessors can offer the sacrament in a variety of languages, including Maltese, Chinese and Croatian.

Father Rizzo said he usually hears 20-30 confessions a day in Italian or Spanish, but the number of penitents increases on Saturdays and Sundays, and he will offer the sacrament to at least 50 people each day on the weekend.

Another phenomenon that is increasing, he said, is people coming to the confessionals who are not Catholic. “They want to confess to see what it is about,” he said. While confessors can listen to and counsel non-Catholics, it is not considered a sacramental confession in most cases.

Even Catholics visiting St. Peter’s Basilica as tourists or even pilgrims may not be very familiar with the sacrament, Father Rizzo said. Many young people will say they have not been to confession since they made their first Communion, and it is not usual for someone to come and say it has been 30 years since they last confessed.

“I have had people come who listened to the words of the pope and then remembered that 30 or 40 years ago they committed a serious sin and they now feel the need to reconcile with the Lord,” he said. “In particular, women have come to me who have had an abortion, and they carry with them this open wound that never heals. Even if they already have confessed the sin, they want to re-confess it.”

For the Year of Mercy, Father Rizzo and the other priests who hear confessions at St. Peter’s and the major basilicas of Rome have been given special faculties to extend absolution even in cases like abortion that normally require consultation with the local bishop or even with the Vatican.

Another Year of Mercy change, he said, is in the penance given to those coming to confession. Increasingly the priests in the basilica will ask someone to show their repentance not by reciting a set number of prayers, but through a work of mercy, “like visiting someone who is sick, doing the shopping for an older person, paying a bill for someone who is lacking money” or helping someone get to church.