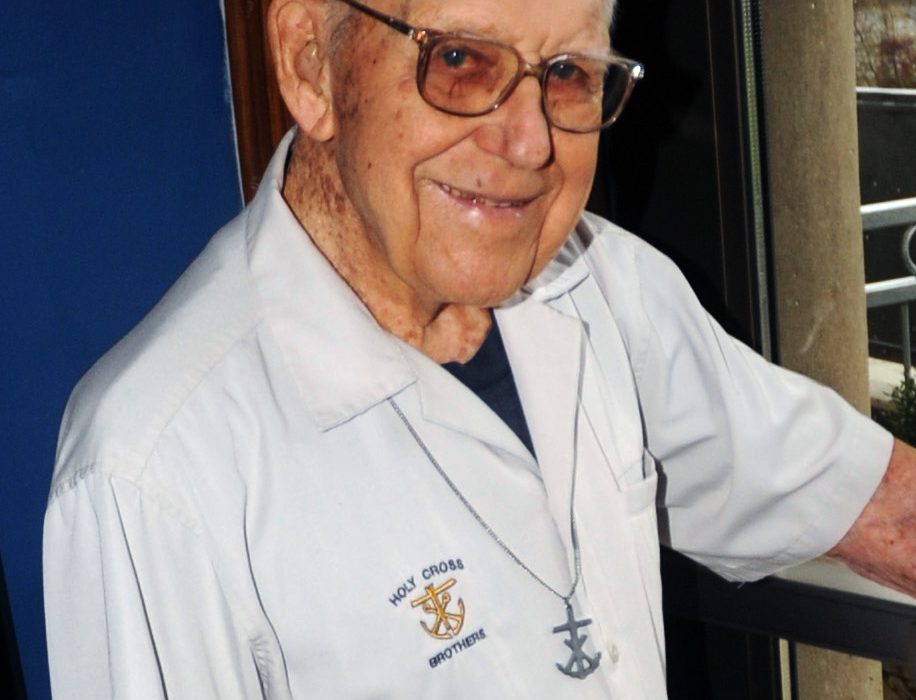 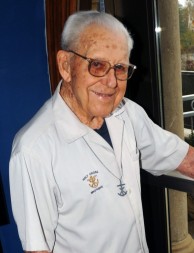 NOTRE DAME — Holy Cross Brother Donard Steffes, will turn 100 on Wednesday, Dec. 10, and many say he is a model Holy Cross religious. He is up early each morning, a routine he’s led the past 70-plus years, spending time before the altar in the chapel of Columba Hall, the residence of the Brothers of Holy Cross, Midwest Province, at the University of Notre Dame.

Donard Louis Steffes was born in Carleton, Michigan, and grew up on the family farm. He attended a parochial school in nearby Maybee, Michigan, where, the good sisters convinced him that he should be a Holy Cross Brother. He went to Sacred Heart Juniorate in Watertown, Wisconsin, for his high school years. He attended the Brothers of Holy Cross Novitiate in Rolling Prairie and then studied at the University of Notre Dame, where he earned a bachelor’s degree in physical sciences in 1941. He taught math and sciences at high schools in New Orleans, Holy Trinity in Chicago and at Gilmour Academy and was the athletic director at each school.

Growing up on the family farm honed his mechanical skills so that he enjoyed doing maintenance chores. In 1952, he was one of the original four brothers who founded a high school in Rome, Italy. Brother Donard was the person who coined the name, Notre Dame International School.

He returned to the U.S. in the 1960s when the “Sputnik era” began and found that he was out of touch with new trends in science. He attended many workshops sponsored by the National Science Foundation to improve his teaching skills. He spent 20 years teaching at Archbishop Hoban High in Akron, Ohio. He and Holy Cross Brother Edwin Mattingly were famous for their many survival camping trips for students to the Boundary Waters in northern Minnesota.

Brother Donard was an avid photographer and organized photography clubs at each school in addition to maintaining his shortwave radio hobby. He influenced many students into careers in science and engineering as well as professional photography. In 1980 one of his former students, David Naples, asked him to come to Liberia to teach physics and chemistry at St. Patrick’s High School where Brother Donard spent five years teaching.

When he returned, a close friend invited him to come to Austin, Texas, to teach swimming and life-saving courses at St. Edward’s University, where he spent more than 30 years. He was extremely proud of the 40-year Service Award he received from the Red Cross for water safety instruction. Brother Donard still has a trim, muscular physique and bearing that belies his age. While he was in Austin, his early morning meditation periods, daily swims, fishing trips, communication sessions on shortwave radio, maintenance work for students or the community, and bicycle rides were legendary.

He moved to Columba Hall at Notre Dame a couple of years ago. Unfortunately, a foot infection prevents him from daily swims and does slow his gait. But he maintains a vigorous pastime using his motorized wheelchair to tour the University of Notre Dame campus and take photographs with his trusty Nikon camera. He shares the photos with numerous friends via email.

Brother Donard’s generous work in teaching, his creative ingenuity, mechanical talents and example are inspirations to all who associate with this marvelous man. A close friend of his once said, “I’ve admired this man for years, he’s the best example of an exemplar I’ve ever seen.”
On Wednesday, Dec.10, beginning at 4:45 p.m. the Holy Cross Community will gather for Mass, a social and dinner to honor Brother Steffes, for his service to Holy Cross and the community.